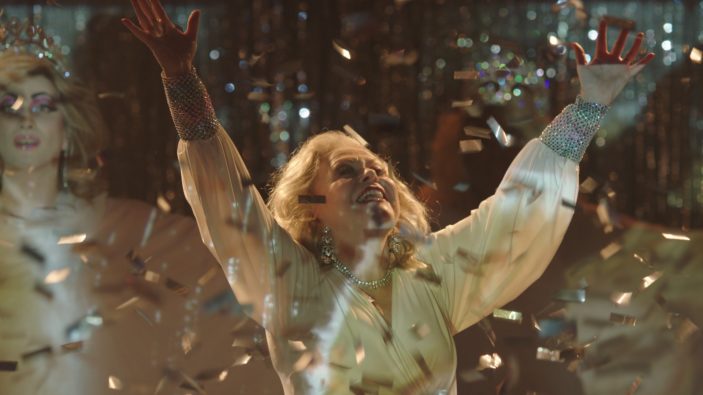 In 2020, a movie detailing the drag scene and the straight Texan mother who comes to embrace it following the death of her queer son should be something worth remembering.  Even more so when said mother is portrayed by a seasoned performer like Jacki Weaver.  Sadly, as well-intentioned as Stage Mother is, it’s a forgettable affair that entertains enough during its brisk 90 minute running time but fails to leave any sort of impression.

When conservative church-choir director Maybelline Matcalf (Weaver, doing the doe-eyed, optimistic shtick she does so well), a drag-approved name if ever there was one, learns that her son, Ricky (Elon Thiele), has passed away from a drug overdose, she’s understandably devastated.  Whilst it’s evident that she loved her son, the two were estranged following his coming out as queer, and his move to San Francisco only further drove a wedge between them, a wedge that was seemingly one-sided given, as Maybelline discovers, Ricky maintained a high opinion of his mother, much to the chagrin of his loving partner, Nathan (Adrien Grenier).

Initially put-off by the flamboyance of Ricky’s surroundings – his funeral is especially theatrical – Maybelline is unsure how to follow through, realising she doesn’t have a confidante in Nathan, and inheriting the nightclub he performed at every night comes as a potentially unwanted surprise.  Leaving her comfortable life in Texas for the cultural diversification of California, Maybelline goes against her husband’s wishes (Hugh Thompson makes for a suitably unlikeable partner) and refuses to sell Ricky’s bar – amusingly named Pandora’s Box – and instead opts to revamp its clearly decreasing temperament.

Maybelline being a choir director means she conveniently knows a thing or two about music, and when the drag performers on hand – including a lovely turn from transgender actress Mya Taylor – enthusiastically embrace her change of direction, the club starts to see a boost in popularity and Maybelline starts to ponder if a second act of her life is worth exploring.  It’s all very pedestrian in its storytelling, and it hits every beat you’d expect, and whilst narrative tropes don’t always have to be reinvigorated, Stage Mother never goes out of its way to try and make something new out of familiar material.

The film can’t be faulted for its message though, and its clear that Brad Hennig‘s script wants to broadcast how society needs tolerance and the ability to love your children regardless of their sexual preference, but with the characters rather thinly written the message is more surface level than it should be.  Weaver’s loud, optimistic Maybelline is very much the energetic lifeline of Stage Mother – although Lucy Liu as Ricky’s man-hungry best friend is similarly a real treat – and her star quality deserves to shine in a film that doesn’t sugarcoat its narrative and has a little more faith in its audience.

Everything regarding Stage Mother is fine, and I imagine audiences unversed in queer culture will respond more positively to it, but queer audiences deserve something deeper.  There’s nothing wrong with presenting a “happily ever after” tale, but removing the grit only cheapens what should’ve been a true championing effort.

Stage Mother is screening as part of the 2020 Queer Screen Film Fest, running from 17th – 27th September. Check the official site for further screening details and ticket information.  It will be available to rent/buy from October 7th 2020 through Madman Entertainment.