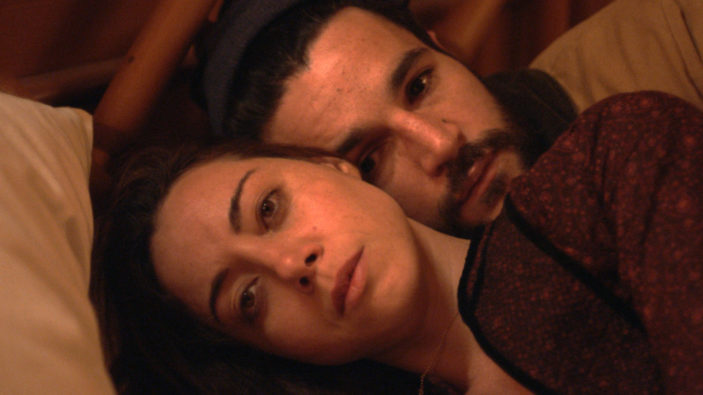 There are some films you just can’t quite pick.

As much as Lawrence Michael Levine‘s Black Bear stays relatively true to its basic plot logline – “A filmmaker at a creative impasse seeks solace from her tumultuous past at a rural retreat, only to find that the woods summon her inner demons in intense and surprising ways.” – it expands so much further on it in a manner that is likely to catch you completely off guard; I also suspect reddit boards will have a field day dissecting its ultimate conclusion too.

Split into two distinct halves – “The Bear in the Road” and “The Bear in the Boathouse” – Black Bear initially plays somewhat traditionally in a dialogue-heavy setting focusing on actress-turned-director Allison (Aubrey Plaza) and her retreat into the wilderness in a bid to find inspiration; shots of her sitting blankly at an open notepad suggest her creative block, but will ultimately hold significant weight as the film concludes.  Unsure of her direction, both personally and professionally, she perhaps find creative fodder in B&B hosts Blair (Sarah Gadon) and her boyfriend Gabe (Christopher Abbott), two struggling city artists who have packed it in for a quieter life as they prepare for the birth of their first child together.

Heated discussions and awkward conversations soon follow as the trio get to know each other over the course of the first evening – their dinner table etiquette is masterfully uncomfortable – eventually spiralling towards an unsettling end that Levine deliberately leaves on a cliffhanger note before transitioning to his second half.  It’s an abrupt shift, and tonally Black Bear completely skewers its original mentality, to the point that Allison, Blair and Gabe have all seen their characteristics and dynamics change.  It will irk some with its convoluted, more intense temperament, but it’s always clear that Levine is in charge as the puppet-master of his demented play, seemingly delighting in its claustrophobic, stressful mindset.

Whilst the film at times feels like it could veer wildly out-of-control, Plaza, Abbott, and Gadon all find an organic place to ground the story, with the second half’s chaotic energy feeling a little more natural thanks to the subtleties they inject into their performances in the film’s first section.  All feel focussed and in tune with the story’s tension, but Plaza is particularly electric, playing on her dark demeanour with an unpredictability that makes her both mesmerising and terrifying to watch.

A film that’s difficult to describe, even more difficult to view, and one that’s likely to hit a little harder for people in the art of making movies, Black Bear isn’t a pleasant experience but its relentless nature means it’s difficult to ignore.