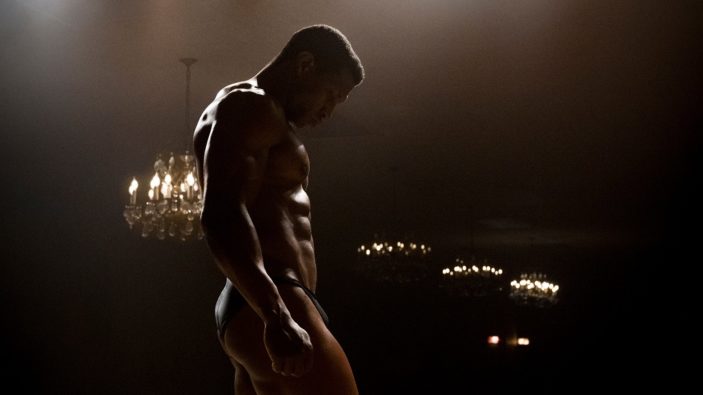 A brutal movie to endure, Elijah Bynum‘s Magazine Dreams speaks to the strive for physical perfection within men and how such toxicity can consume them from the inside out.

On that outside, Killian Maddox (Jonathan Majors in a demanding, raw performance that should already be favourited come award season next year) has the type of physique one would deem flawless.  Bynum’s camera movements want us to admire every inch of his frame, and to the naked eye Killian’s own approbation for his body seems evident as he poses in little more than a pair of snug briefs for many of the film’s sequences.

But that’s to the eyes of us as an audience.  To Killian, he can never seem to build muscle in his legs – no matter how hard he tries – and he’s often told by the judges at the bodybuilding competitions he frequents that his deltoids are “too small”.  It’s a criticism he has taken all too heavily, adding another weight of burden to his already damaged psyche stemming from past actions and relationships, which has in turn affected his own skills in connecting with people on the most basic of levels.

There’s an irony present within Magazine Dreams in that Killian, who looks at gracing the cover of a bodybuilding magazine as the pinnacle of success within his chosen aspiration, feels as if he’s an invisible presence, despite his imposing stature.  He can’t help but compare himself to the other men competing around him and he has dreamt of a friendship with Brad Vanderhorn (American bodybuilder Mike O’Hearn), his idol and body inspiration; the admiration Killian expresses for Brad’s own body is one of the film’s many moments that speaks to a subtle lace of homoeroticism present within the sport itself, as well as a set-piece that understatedly flips the narrative on its axis.

In fact, the last hour of Magazine Dreams devotes itself to a mentality that is likely to divide its audience.  It’s already a brutal, tense experience – the draining anxiety present throughout is palpable – but what begins as a character study unravels in a manner that only increases our fearfulness as a helpless viewer.  Killian is essentially a scared, lonely little boy desperate for a love that he was denied as a child – he shares a heart-breaking note as to what happened to his parents in one of the film’s more uncomfortable exchanges – and Bynum’s unrelenting script never lets him off the hook, even when we beg so.

There are three women that weave in and out of Killian’s life that, at various times, embody a potential saviour for his self-destruction, but their individual lights aren’t enough to guide him out of his own darkness.  Haley Bennett as Jessie, a fellow worker at the grocery store Killian is casually employed at, is perhaps the most devastating; initially seeing something of a kindred spirit in his own particular shyness, their date is one that boils from the ground up when his idea of small talk puts her on edge, both emotionally and physically.

Taylour Paige, as a prostitute Killian rather coyly agrees to bed, speaks to his uncertainty as a sexual being, and Harriet Sansom Harris (so bombastically robbed for her winning turn in Licorice Pizza) offers sound advice as his counsellor, even though you gather the sense she believes he’s beyond help.  These women ultimately exacerbate Killian’s anger, and as someone who believes he’s been cheated by life, it only fuels a rage that explodes at any given moment across the film’s 124 minute running time.  Not unlike Uncut Gems, Magazine Dreams commits to a self-destruction that we are powerless to avoid, and though it threatens to culminate in a variety of sequences that slightly cheat the film of a definitive ending, Bynum always hones a sense of control regarding Killian and trying to understand him.

As Killian is told in the bodybuilding competitions he competes in that he needs to relax in between poses – something he rarely does – Magazine Dreams itself rarely allows us to adhere to the same.  It’s terrifying at times, painful at others, and challenging from its inception, and though there’s a tighter, more concise version of this story somewhere, Majors is the undeniable force that bolsters this film above any of its flaws; something that’s all too fitting given how aesthetically perfect he presents.

Magazine Dreams is playing as part of this year’s Sundance Film Festival, taking place between January 19th and 29th, 2023, both in person and online.  For more information head to the official Sundance page.