Interview: Rosehaven‘s Celia Pacquola on the final season and embracing being a “nice” comedian

It’s never easy to say goodbye, and Australian comedians Celia Pacquola and Luke McGregor are making sure the sentiment is felt even more so as they debut the final season of Rosehaven.

The number one comedy show across all ABC for 2020, the fifth and final season of Rosehaven premiered last night on the ABC (August 4th) to expected acclaim, and, to celebrate, our own Peter Gray got to chat with star, creator and writer Celia Pacquola.

After she imparted wisdom as to how he can potentially compete in the Brisbane olympics, the two chatted about making a show about nothing, how it was to film during Covid, and if she prefers stand-up to scripted material.

I will quickly say, before we get to Rosehaven, your “toe ring, belly ring, finger-ring” speech from your stand-up is one of the funniest observations I have ever heard…

(Laughs) I like that you called it a speech, it makes it sound more official! I like it.  It’s my Ted Talk, basically.  Thank you very much.  I feel like someone had to say it.

It really is one of those things of “It’s been in front of us the entire time”, and I found that with Rosehaven itself, it’s one of those shows where it’s about the mundane, essentially…

It was originally Luke (McGregor) and I talking shit.  We were on Utopia together, and when we were waiting in between scenes we would just talk rubbish.  “What kind of superpowers would you like?, What would you do in a zombie apocalypse?”, that sort of stuff…and we asked “Could that be a show?”, and turns out you need plot and characters.  We built the rest of the show around that.

Luke’s from Tasmania and I’m from a small country town, and what we love about that world is you can make small things a big deal.  This is something that never made it (into the show) but Luke once lived in a building where his neighbour would always wipe their feet on his mat, and something like that would’ve been an episode.  It’s not a big deal in the world, but we wanted to build a show where it is. I mean, we did an entire show around when our characters got a package delivered that didn’t belong to them.  The less that happens, the better.

I liked that in one of the episodes of the new season, you ask if you can put a restraining order on someone because they’re annoying, and that’s something I’d very much like to do to people right now…

How funny, I don’t think you can.  You just have to avoid them.  Luke had some material about a number you should be able to call before the police, like 111, for someone who’s annoying.  It’s not a crime but you want to be able to tell an adult, but you can’t because you’re an adult.  But that’s why we love it because we have a vehicle for Luke and I to put in stupid things that we have genuinely talked about in our real lives.

When it comes to the writing process, do you write for just yourself or do you and Luke both pitch to one another?

We write for everyone.  We plot the series and break down the episodes and then take an episode each and write it on our own.  If there’s a line that we disagree on, whoever’s character it is gets the final say.  If he writes something for me that I’m not sure on, because it’s my character I can say it or change it.

Does it ever piss you off if Luke comes up with something funnier?

Ha! We want the show to be the best show it can be.  Sometimes it’s annoying if I think of something funny but it’s not something my character would say.  That’s what is great about the five seasons now because we know these characters so well, so the writing process is easier.

Do you have preference in writing stand-up material or writing scripts?

I haven’t done stand-up for a few years, I was supposed to be getting back into it but then we had a pandemic.  They’re very different.  I like them for different reasons.  I like writing scripts because it’s a bigger project.  It has structure and you can polish it.  What I like about stand-up is I can jump up with a half-baked idea and just try it and throw it away and it doesn’t matter.  I like them both differently. 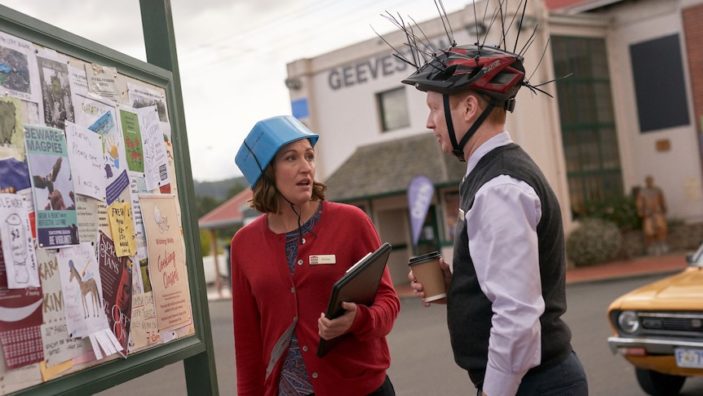 I watched All Talk not too long ago, for like the fourth time because I needed to laugh and I find your brand of personable, relatable humour is the funniest.  And I think that’s what makes Rosehaven so watchable too, like a comfort watch, because these are the stupid conversations that I would have and it’s good to know I’m not the only one…

Yeah! We know it’s not smart, its not groundbreaking, but that’s ok.  Sometimes I wish I was witty or political or hard-hitting and that’s not who I am.  Both Luke and I, as much as I hate it, one of our assets is that we are quite likeable.  It used to drive me crazy when I get reviews saying “You just want to hang out with her, she seems so nice” and I would say “I’m not nice”, but I think if you don’t have that it can cost you a lot of karmic debt.  This is the best show that Luke and I could do, because we are both silly and the jokes are never mean or crude.  It just doesn’t suit us.

There’s space for all of that comedy too.  There’s enough people doing the edgy stuff and it’s ok if we want to do a silly little show.  There’s barely even any kissing because I’d get the giggles.  None of this rudeness in our show.  Stand-up is very me though, very personal.  I don’t want to do mean comedy either, but if I say something about myself I can own it, it’s my story.  No one can tell me I can’t talk about something because it’s the one thing I do know.  You picked the full-on one (All Talk) because that’s quite dark.  More and more I love being able to talk about stuff that might be able to do a bit of good.  That’s probably the most political I’ve ever been, and even then it’s not really, but there was a time I never would have talked about any of that.  I see now the impact that can have.

Even with Rosehaven too.  I’ve seen it with people who are saying they’ve had a shit day, a shit time, and they feel better.  That means a lot.

I remember reading somewhere that you said you wanted to write episodes purely so you could just play with a dog or a lamb the entire time.  That is a life goal right there to be able to get paid to hang out with a dog all day and no one can stop you.

Yeah, what is the point of having your own show if you can’t write in stuff you want to do? It’s the best.

Was this latest season filmed during Covid?

Sure was! There’d been no cases in Tasmania really, so it was like it never happened.  It was January/February/March this year that we went.  Even though there were no cases the entire time we were there, we filmed under very strict Covid rules.  We didn’t want to be the people that made a mistake. I thought it was going to make it a not-fun experience, but it was fine.  A little annoying (though).  The worst thing was the last day of filming, saying goodbye to people who had been with us from the start, no hugging…so that sucked.  Luke and I could hug each other, so we hugged a lot and then pointed at people saying “this is what I would do to you”.

You always knew this would be the final season?

We wrote it that way.  We wrote during lockdown not being sure if it would ever get made.  We just wrote it for something to do, to keep ourselves sane.  It all happened quite quickly once it was decided it was being made though.

It must feel nice to have that privilege too, to know the show is going out on its own terms.  No cliffhanger endings that never get resolved.

Yeah.  It’s like playing “Beat the Bomb”.  I would be more upset if we didn’t get to finish it the way we wanted.

Rosehaven Season 5 is screening from August 4th at 9:00pm on ABC TV and ABC iview.