To coincide with the trailer launch of Ron’s Gone Wrong, the latest animated comedy adventure from 20th Century Studios telling the story of a socially awkward middle-schooler and his digitally-connected, walking, talking “best friend” whose hilarious malfunctions set him apart in this digital age, Peter Gray chatted with the film’s directors, Sarah Smith and Jean-Philippe Vine, during a roundtable discussion.  Ahead of its October 21st release, they touched on the film’s hopeful message towards the social media-driven youth and how it was completing production during a global pandemic.

Did the idea behind the film come from your wishes or perhaps your frustrations as to what technology is capable of?

Sarah: The very first idea for the film came to me when I watched Her by Spike Jonze.  I felt like we really needed to make a movie like that for kids.  I was watching my-then four-year-old seeing adverts on her iPad saying “Mummy, you have to buy that.  it makes your clothes bouncy and fresh!” They have no idea that this voice talking from the other side of the screen may not be totally reliable.  At the same time, I had friends with older children and I was looking at the pressures of the incredible excitement that came with social media relationships, but the way it was changing those friendships.  We wanted to come up with a way that was personifying a walking, talking iPad.

Jean-Philippe: One of the things we thought about was the algorithms behind filtering really attractive tech and positioning the users in different directions.  Our biggest question we wanted to ask was “How is that affecting friendships online”?

Sarah: It very much goes along with the way children see their friends.  They want someone who agrees with them, who wants to play the same games as them…in a way that’s the type of dream the technology world offers you.  And in our movie, Barney ends up with Ron, who’s completely dysfunctional and broken, who doesn’t agree with him and doesn’t know anything about him, and they have to build this relationship from that point.

Where did the design for Ron originate from?

Jean-Philippe: We really wanted to think that if this was coming from a Silicon Valley company, one of the huge ones, how would we design a piece of tech that’s really stylish and really attractive to children who would use it.  We wanted it to be elegant and cool, but the main thing was that the whole face of the Bot is a screen, which means every part of it can be pixels.  The child can give it a personality, they can download skins, and from an animation point of view each B-Bot looks really different.

Sarah: That was the other inspiration for the film too.  There are lots of companies in the world trying to make this next generation device.  This next thing to replace your iPad or your phone.  The funny thing is that when you see adverts (for these products) they’re always on wooden floors with no stairs…it’s so difficult in the real world to master the things that go into such a device.  We had the thought of what if it could be done? We consulted a company, Sparrow, who made the BB-8 (for Star Wars) and we thought what’s the next step in technology.  The idea is that every child comes out (of Ron’s Gone Wrong) wanting one, but really wanting one that’s like Ron.

Was there any type of message you wanted to deliver with this film?

Sarah: The first message is really about friendship and how somebody’s who’s completely different from you, who argues with you, who’s contrary…but from that you can build a complex, messy, lovely relationship.  It’s almost like the difference between having an iPad and having a puppy.  It doesn’t do what you say, but it’s so much more fun.  On a bigger level, the world of social media interaction is putting all this pressure on us to communicate with people who are exactly like us.  And for kids, setting this “standard” of who they think they need to be, which is not themselves.  Ron and Barney in the movie get to know each other completely, no editing, no photoshop…and they have the most joyful relationship. 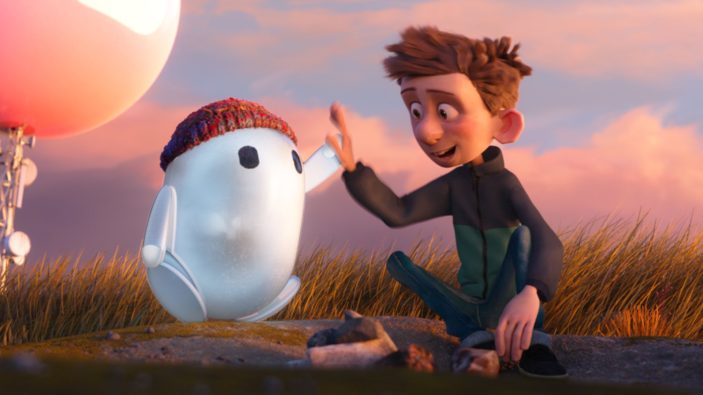 With the character of Ron as an artificial intelligence, is there any suggestion that he too has a soul?

Sarah: Ron is a beautiful cheat, in that he only uses words and phrases that he’s heard before.  He builds up like a proper computer, from what he observes.  There does come a point in the movie where you feel like, surely, he knows what he’s saying.  He builds up a point of view based on learning, which is why he leans things about Barney that (Barney) never tells anyone.  He observes and he learns, building it up into this web of knowledge.  That really is what a personality is.  But we never hd that moment of “Ahh, he’s alive!”

When it comes to the joint direction from the both of you, are there certain facets of the job that one of you takes over more than the other? Or is everything shared equally?

Sarah: We did divide originally.  I came from the script (writing) and I worked mostly in edit, story and camera layout, building the structure of the film.  JP was working on design and animation.  We crossed over all of the time though, as this had to be one film.  It was incredibly labour intensive because we made it in lockdown.  That was incredibly difficult.  We had 250 people working from home, editing everything over Zoom.  We were both flat out in different areas all of the time.  We were dividing and conquering all the time.

Jean-Philippe: We had Zoom calls from morning to night.  From one review to the next.  it’s unthinkable to imagine one director doing all of that.

Because of COVID-19 and the lockdowns, people have been so isolated from one another this past year.  Do you think this movie’s theme of friendship is even more relevant?

Sarah: It is! There’s two things in the movie, one, where the B-Bots have to stay within 6 feet of their owner, which is a fun comment in this world of social distancing, and two, being a movie about kids being alone in their rooms with a screen, and Ron and Barney get to go outside and have this adventure.  All the things that kids have been missing, that direct friendship and contact.  Hopefully it’ll speak to kids, that idea of putting the screen down and go outside.

Jean-Philippe: There’s also that collective feeling of that we’ve missed that sense of real face-to-face connection.  We wanted to celebrate that, because we wanted it so badly ourselves.  Sarah’s totally right, with our own children we want them to explore the woods and have adventures, and this movie is a call to do that, in a way.

Ron’s Gone Wrong is expected in cinemas from October 21st, 2021.