As world-famous designers and founders of acclaimed brand Rodarte, sisters Kate and Laura Mulleavy have been at the forefront of fashion since the label’s inception.  Not just content dominating their own avenue, the sisters have branched out into the world of film, both as designers creating pieces for the Oscar-winning Black Swan and as directors of the psychological thriller Woodshock.

Changing their tune considerably, Kate and Laura have ventured into the world of animation, coming on board Sing 2 to lend their intricate eye to the avenue of animated costume design.  As the film prepares for its local release (you can read our review here), Peter Gray spoke with the sisters about the process of designing for animation.

Where do you begin designing clothes for animation?

Laura Mulleavy: I think we approach designing for animation in the same way we approach designing (for our label).  Similar to how we worked on Black Swan and even our own film Woodshock, we took the script and the narrative of the story and said this is how you shape the emotional journey of the character with clothing and to support the performances.  It was so exciting because we did things on our own within this experience.  We weren’t working side-by-side with the actors or the set designers, but we did work with the director and the animation team, and what we were able to do was say that this film is about these individual journeys that are experienced within this overall experience of the group.

There’s an emotional uphill battle for all of them, individually and collectively, and what we wanted to do was take their individual stories and personalities and reflect that within the clothes they are wearing for their final performances.  Each of those performances answered the big question they were (asking) throughout the film.  It just so happened that this final performance happened within a space opera, and Kate and I love sci-fi, so it was really exciting.

What I really love is that you obviously took so much time and effort to create these clothes, it isn’t a gimmick, and Meena’s gown during the “I Say A Little Prayer” performance is proof of that.  I think we also forget that aside from the visuals and the celebrity voices, there’s so much detailed work that go into these films that is often taken for granted.  How long does it actually take to create something like this?

Laura Mulleavy: We started working on the film around 2018, I believe they were working on it longer than we were involved, and that’s how long it took to be finished.  I saw a finished version of the film a couple of months ago, so if that gives you context there’s always work to be done in animation.  It’s an endless job.  The teams behind it are fascinating that they can make these worlds out of nothing.  Also, with the costumes, we worked so tirelessly with that team.  It was so cool to meet them for the first time at the film’s premiere.  We were talking about how a group of very different people came together to create an experience that was pretty flawless.  I think it’s a testament to being open to other people’s creative process and stepping in and out of that.

What we wanted to bring to the table is what we are known for.  Rodarte is known for its hand techniques, the hand-dying, the hand-beading…I really thought if we could contribute something like that, something that’s imperfect, something that’s about organic qualities and inspired by nature, I felt like it would really push the boundaries as to what you would see on screen.  It’s really amazing, you can see it really pop out on screen.  You see all the detail.

Do you approach creating a gown for something like Sing 2 in the same way you would as if you were physically making it?

Kate Mulleavy: If I compare our work on Black Swan to this, there’s a difference in the physical tangibility of an actor or a dancer having to get into a tutu to perform.  There were some interesting things that we did on that (Black Swan) that were more about privileging the viewers eyes.  I think in this instance (for Sing 2) we felt a little more free, in the sense that we were trying to make things as real as possible.  You’re really aware of the movement.  In that sense the costumes have to feel real, but I don’t think you’re limited in the same way.  You want them to move correctly. 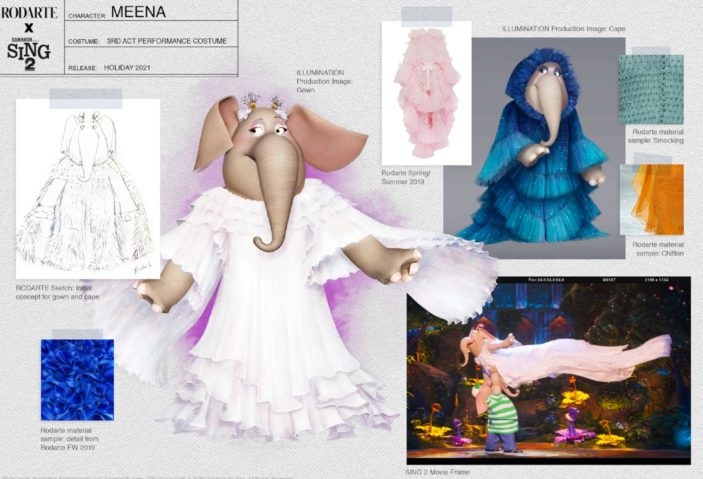 Did any of your Rodarte label pieces crossover into your work on Sing 2 or vice versa?

Kate Mulleavy: What’s interesting is that when we did Sing 2 it was really a chance for us to explore our techniques.  Our job is to create costumes that feel new in animation because they are so detailed and you have that connection to the hand.  I think in that sense we were able to reference other Rodarte moments.  I think there’s almost a meta experience that happens.  If you’re a fan of our label, you’ll be able to watch the third act of this film and see Rodarte in it.

Laura Mulleavy: I think everyone has a language as a designer.  When I look at a costume designer’s line of work I can see the thread that carries through their films.  They are working in tune with the director’s vision, but you can see that as an individual costume designer it’s from their body of work and their voice.

Any favourite creations from Sing 2?

Kate Mulleavy: For me it was Meena’s dress.  That took so much work, so watching that tell the story so beautifully…I really love that moment.  It’s amazing to see, and I think something you said was really important in that you don’t always see how much work goes into these films.

You’ve ventured into film previously, Black Swan and Woodshock, both much darker films, is it a medium you’d like to continue exploring either through your fashion or as filmmakers?

Sing 2 is scheduled for a release in Australian theatres from December 26th, 2021.