Interview: Ray Liotta on playing a “Hollywood Dick” in The Many Saints of Newark; “One thing I don’t have is a calm intensity”

Ray Liotta has made a name for himself throughout his career portraying characters with a certain intense edge.  From Scorsese’s genre-defining Goodfellas, the psychological thriller Unlawful Entry, and the controversial Silence of the Lambs sequel Hannibal, the Golden Globe-nominated actor has made it a point to express his vigour on screen.  But for our Peter Gray, who caught up with the actor ahead of the release of The Many Saints of Newark, it’s his lighter work that earns prominence, something the star immediately took to when they discussed career typecasting, being a “Hollywood Dick”, and method acting.

When we think of the mobster movie, yours is a name that’s quite synonymous with that genre.  But, for me, I align your name with Corrina, Corrina, Heartbreakers…

Ahh! I knew you were smart.

What about Operation Dumbo Drop?

I remember seeing that when I was about 10 years old.

Worst title ever for a movie.  Worst!

It just made me think of typecasting and if that’s been something you’ve struggled with in your career?  Because comedy is where I think you’re brilliant.

You are such a smart guy.  I didn’t do my very first movie until… (exhales) this is a long one.  I didn’t start acting until I was in college.  I stayed through college.  Graduated.  Did a soap opera for three-and-a-half years.  Moved to L.A. when I was 25… nothing happened.  Then I got my first movie, Something Wild, where I was like a nut-job.  And then I did Dominic & Eugene, you seen that one? Me and Tom Hulce.  Tom Hulce was unbelievable.  Then I did Field of Dreams, then Goodfellas… it’s just such a crazy… I’m not sure I handled it the way I thought it was supposed to be handled.  And then things changed, I played a heart surgeon and then this… it depends on the success of the movies.  Ask your question (again) cause that was a loaded one you gave me.

Is typecasting something you’ve struggled with?

Yeah. I tried to go against it, but then after a while you say “Pfft, I played two bad guys in a row, so what!”, and what’s happening now is actors brand themselves, so they play that same character that they’ve always played before, so there’s no real surprises in anything.  When I started in the 70’s, 80’s, it was just different.  I think sometimes it shot me in the foot.

This movie, The Many Saints of Newark, how did you become involved with it?

I had heard they were doing it.  When I was doing Hannibal, where I ate my brain, David Chase came up to me about doing Ralphie, a character in season 3, who Joe Pantoliano played and won an Emmy for, so I obviously I made the right decision, at least for him, to not take it.  But there’s something about this guy (David), he’s just a dude, he’s smart, he’s intense, and I really liked his energy.  So when I heard about this I wanted to be a part of it.  I had my agent call him up, and was told “We’re only seeing people in New York”, and I didn’t care.  I’d fly myself to New York just to sit in front of him.  And that’s what I did.  And then after the lunch, and 17 bottles of wine (laughs), I’m joking, they offered me the part.  And then, and there’s a lot of stuff that we’re not allowed to talk about, all these other things started happening, parts within the parts… and it was really just all about him. 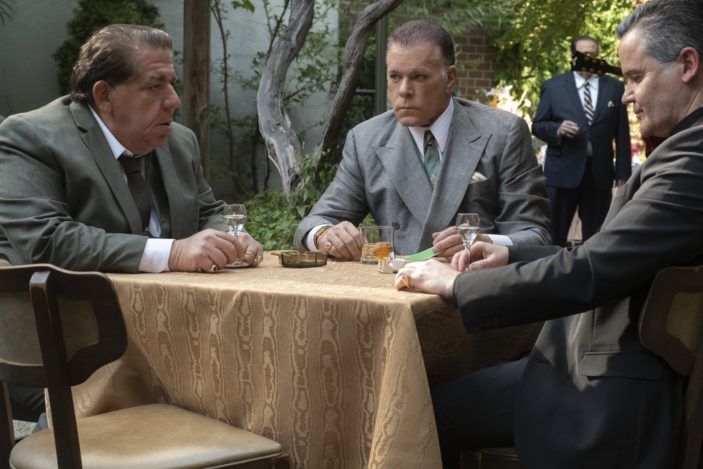 When it comes to someone like Hollywood Dick, where do you start building that character from?

Pfft, his name.  Hollywood Dick (laughs).  (He’s) just this flashy guy who’s the head of the family, who gives that to his son, and (he) stays in the family business.  I go to Rome at 60-years-old and a marry a 25-year-old.  A Hollywood Dick!

The film and your performance has this intensity to it.  I had the pleasure of speaking to Alan Taylor and your co-stars, and they’re such wonderful people with calm presences to them.  What was the energy like on set?

One thing I don’t have is a calm intensity.  In any sense of the word.  There’s so many things I can say.  I do what I gotta do, based on what they have me saying.  If I’m supposed to slap you, I’m not going to come up and hold your hand and talk about stuff.  I keep a certain energy and distance when need be, and that’s for my own method of doing things.

I think the film speaks really well to fans of the show, but also those that haven’t seen it…

Totally.  That’s the smartest thing you said.  I only saw a couple episodes of The Sopranos.  The movie stands alone on itself, but it melds (everything) together.

The Many Saints of Newark is screening in Australian theatres now.