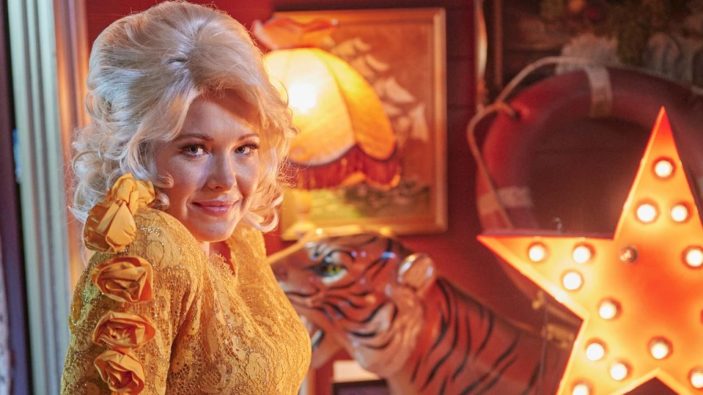 A festival darling for 2022, Seriously Red, a Dolly Parton-centric comedy from the mind of writer/actress Krew Boylan, is finally taking centre stage in Australian cinemas this week.

In this rowdy and rambunctious musical dramedy, Red (Boylan) is a vivacious, clumsy and occasionally misguided redhead who is at a crossroads in her life. After misreading her work party’s dress code, Red trades her 9-to-5 job in real estate for a new career as a Dolly Parton impersonator.

To coincide with the film’s release, Krew spoke with our Peter Gray about what Dolly means to her, where that love first originated, and why she thought Rose Byrne would make the perfect Elvis Presley.

Congratulations on the film.  It’s done the festival rounds here, but you had your international premiere at SXSW earlier this year.  How was that experience to physically premiere a film there?

Yeah, that was awesome.  We flew over and it was the first time we’d seen it with an audience.  I was a little nervous, but also, what can I do? There’s nothing I can do.  I’m just going to go and watch it, you know, it’s a thousand seat theatre full of people!  We were tickled pink to have our premiere there.  It’s a great festival.  And we were honoured that Dolly tweeted about it a few days earlier, even though she wasn’t there that night.  She was at SXSW (though) launching her book, so it was a beautiful aligning of the stars.

I was going to ask if you had heard from Dolly regarding the film? She’s obviously aware of it…

Oh, aware of it? Yes.  That’s the first thing she said to me.  The very first thing.  She grabbed my hand, she jumped and down, and she said “You played me! You played me!”, and that it’s taken me eight years and how I’ve (finally) done it.  Her manager (Danny Nozell) is an executive producer on the film (and) we really couldn’t have done the film without Dolly and Danny and their blessing.

I very much relate to looking at someone’s success and measuring it against yourself.  At the same time, it’s finding that person that lends you a sense of purpose.  A sense of confidence.  I’m guessing that’s who Dolly Parton is for you.  Where did love and affection for her start?

One of my favourite films is Steel Magnolias.  I remember my mum showing me that movie when I was little, and I just remember thinking “I love all these women.” They were all so funny, and so kind, and emotional, and smart.  I loved Dolly out of that ensemble, and I started to figure out why I wanted success.  I knew I wanted success, because my dad was always like, to his daughters, “You go girls.  You go.  You be successful!”

I had drive, I just wasn’t getting the success I think I wanted, so I started writing to figure that out.  What did success look like? And then, for me, I knew the answer was Dolly Parton.  Hence why I wrote about her.  And hence why (the character of) Red becomes her to try and also figure it out.  I really leaned on the themes of identity, and I think it’s very prevalent with social media and who we are and who we’re pretending to be in our lives.  We’re all online and we’re all Zoom-ing with each other (but) are we being true to our identity?

I have to ask regarding Rose Byrne as Elvis.  Where did that idea stem from?  Was there a moment that clicked for you in casting her?

We were both living in New York City, and I was writing and I always wanted to play a man.  Just because I’m an actress doesn’t mean I can’t try everything.  I woke up and I was thinking Rose could play Elvis.  She’s beautiful and has those lips and those cheekbones, and she’s got those great eyebrows.  I thought, “I’d wonder if she’d be my Elvis?”, and she was picking me up that morning to go to Fire Island, and we’re driving and I just said “Rose, you have to play Elvis!”  She said “That’s brilliant.  Yes!” It was just a really sweet moment.  And then, like two seconds later, she tells me she’s having a baby! So just a cute moment of how it came to be. 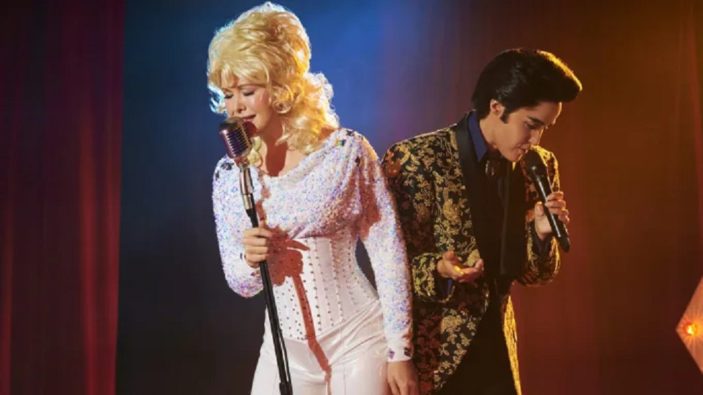 How far did you research into that world of impersonations?

Other than what you can find online, I made the trip to Vegas to watch a bunch of shows and where I could speak to them afterwards.  They’re often standing around signing autographs and stuff.  They’ve all got such different journeys.  Some people are lost in there, and some people aren’t.  To some it’s just business, but others are better for it personally.  I respect the whole industry.

In the film your character and that of Kenny Rogers are both enveloped by your celebrity.  How was it detailing the duality of the role? It was fascinating to watch.

Thank you.  Yeah, there’s definitely stories of people doing that, where they live as the person.  I was leaning into the themes of identity and masks and how often are we wearing masks, and in this world of social media and filters and constantly checking on that little treasure box to see what our identity is.  To see how it’s changing and making sure we’re being honest with that.

I wouldn’t be able to pass up mentioning those sisters you managed to get in this.  That was such an incredible cameo! How did that conversation start?

Absolute Australian icons! Dannii (Minogue) came about through our costume designer, Tim Chappel.  He has a good relationship with her, and I believe he made the call and asked if it would be possible.  She’s such a good sport, and as is Kylie.  Kylie was really generous in helping us use her music.  Those sisters are just Australian through and through, and I’m so grateful they were just so cool and kind and beautiful.  And with such a great sense of humour.

When “Can’t Get You Out Of My Head” played I started thinking if we were going to get a dance number of sorts.  On that, has music always been a passion for you too?

Yeah.  In Sydney we have this school called Brent Street, and I was a Brent Street kid.  We had show groups where we would sing and dance.  Not so much acting, but on the side of I was doing castings from about 12 years old, going for that small Home and Away part or commercials and stuff like that.  I was an ice skater (too) and my older sister decided to quit that and go to Brent Street, and I wanted to copy her, so I got into this dance troupe and it was all singing and dancing and putting on shows.  We got to go to Disneyland to do shows, and we bid for the Sydney Olympics…so it was all this really great stuff, which is why the movie is so musically driven.  The music of the film is really its heartbeat.  It wouldn’t be the film without Dolly’s music and her blessing.  It’s a real critical part of my creativity, really.

Seriously Red is screening in Australian theatres from November 24th, 2022.