Once a staple of Australian television – having worked on such notable homegrown series as McLeod’s Daughters, Underbelly, and Home and Away – Jonny Pasvolsky has since been making ground for himself across the Pacific, starring in such profile productions as Mortdecai opposite Johnny Depp, The Front Runner with Hugh Jackman, and the acclaimed series Westworld.

Now back on home soil, Jonny is discussing all things Ascendant, an ambitious sci-fi thriller from first-time filmmaker Antaine Furlong.  Chatting with our own Peter Gray, the two spoke about working on such an inventive production, the unique approach to rehearsal, and his own hopes for the film itself.

I spoke to Antaine Furlong last week, one of the most enthusiastic people I’ve spoken to.  How did the film come about for you?

I was living in Los Angeles at the time, and it really was an out of the blue phone call from my agent telling me that I’ve been offered this role.  She asked if I wanted to read the script, and I thought you don’t get offered too many straight-up offers in your life so I had a read and found it fascinating.  Spoke to Ant and then things moved quite quickly once I said yes.  Before I knew it I was on a plane to Australia.

Because you were in L.A. and you were involved in American productions, had you kept an open mind to returning to Australia?

Yeah I was always open to it.  I was working on a few things in America, and over the years that i’ve been there, which has been about 7 years, I shot a few series’ and a film.  But I try to return here when I can.

The way Antaine filmed it was quite interesting.  When you read the script were you aware of how separated you were going to be from other cast members?

I couldn’t quite grasp how he was going to pull it off, and I didn’t realise to the extent of how realised the effects were.  It’s extraordinary on that scale, it’s just amazing.  What I really focused on was the relationship between the father and the daughter (Charlotte Best’s character), and that was evident from the beginning.  We worked really hard amidst all this action for that relationship to be strong.  That was the big appeal to me, and Ant was so up for it.  He wanted to know how to make it better, how to make the bond even stronger…that was what was interesting and exciting for me.

Was there much rehearsal? Did you get to work with Charlotte Best at all?

We actually didn’t get to work together directly that much at all.  I got a fair bit of rehearsal in with Susan Prior, who played Barbara (his character’s wife) though.  Charlotte would read off-camera sometimes, but because we were in two different locations that didn’t always work out.  In a strange way, the absence of her helped me. 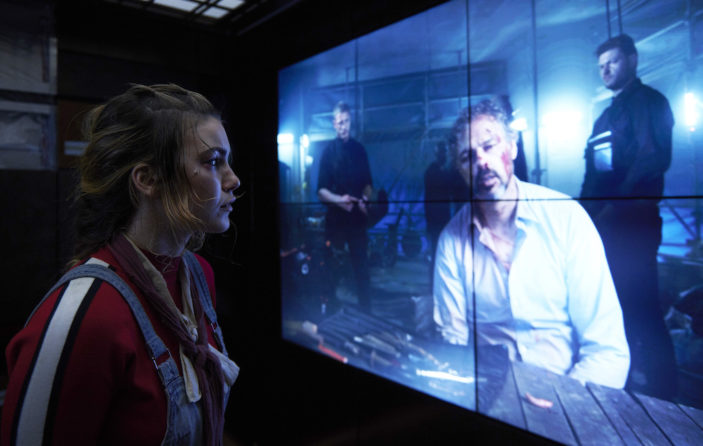 Her character is trying to work out who she is, so it probably almost worked out better in that regard…

Oh absolutely.  That relationship was such a strong thing for me cause I have three daughters, and what I related to was that turmoil.  You want your kids to find their “super powers” in life, their engine if you like.  You have this protective instinct and you don’t want to stifle them but you want to help them understand.  In relation to this film, when this strength (is revealed) that’s potentially destructive, that battle for my character was something I really related to.

The idea for this film is to be the start of a trilogy.  Have you been given much insight into where this story is going?

Ant is very good at saying very little, and I mean that in the best possible way.  He has flagged some basic storyline that is pretty fascinating.  Just in that world of effects and fantasy…he’s got some pretty big ideas and it’s quite exciting.  It’ll be nice to be a part of that ongoing experience.

I said to him that the film is really coming out at the best moment, given that we are doing as well as we are with the pandemic and Australian cinema has thrived as a result of that. I did relay to him that I really hope audiences get behind this, because Australia hasn’t really seen this from their own.  We’re so used to these films being American productions so I think he’s tapped into something…I really hope this does something for him.

Oh, thank you.  Yeah I really do too, he’s such a unique person in his self-believe, his desire to collaborate, his passion.  He has such a full pre-film life, if I can call it that, between drinks, shall we say.  I think he’s transposed a lot of those skills to filmmaking.  Working with him was very interesting.  He’s a first time director, and I think there’s often a lot of noise around that, and his ability to step onto a set and turn his vision into something clear was impressive to watch.  I’m really grateful to hear you say that because I’m dying for people to get behind it too.  I agree with you, I don’t think it’s something we’ve stepped into before…on this level.

Ascendant is screening in Australian theatres from April 8th 2021.