As Halloween Kills slices its way through Australian cinemas (you can read our review here), series scream queen Jamie Lee Curtis and fellow cast-members Andi Matichak, Anthony Michael Hall and Kyle Richards participated in a global press conference – which our own Peter Gray was invited to attend – to discuss the character dynamics formed in this sequel and. for original cast members Curtis and Richards, how it was returning to such a franchise after 4 decades.

What do you think it is about these films that connect with audiences so much?

Jamie Lee Curtis: I’ve been talking about Halloween for a very long time in my life.  I really think it’s good and evil.  It’s taking it back to mythology and the basic tenants of storytelling (of) good and evil.  The epitome of ubiquitous normalcy as a young babysitter in a small town and the collision with the human form of evil.  I just think it’s kind of classic.  As the kids would say, it’s the O.G.

Andi Matichak: I need to get your kid dictionary…

Jamie Lee Curtis: O.G., original gangster, it’s old school.  I know you may not know that one because you’re 12.  I hate your guts.

Andi Matichak: (Laughing) I think what makes Halloween so scary after all this time is, at least to me, the simplicity of it.  Like what Jamie said, it’s good versus evil.  It’s this man or this shape, this white-masked being who you can project all of your own fears and what scares you the most on to.  There’s really no reason as to why he does what he does, and I think that randomness is really scary and that’s what translates over time.

Laurie was one of the first female characters in horror to show the strength of a woman in real life.  How much do you think she imprinted on characters in the genre, and how much did she imprint on you when portraying other characters?

Laurie and Allyson represent a meeting of generations.  Motivated by her ideals, Laurie faces a formidable obstacle.  How do you perceive this generational transition and the strength of female protagonism in the film?

Andi Matichak: One of the thing that, in my opinion, makes the 2018 film so strong is that it centres on your star, Laurie Strode, and her trauma.  And how that one event, that one night, has shaped her entire existence and being.  The you cut into this second film, which widens the lens a little bit, and you get to see Karen and Allyson’s trauma and how they’re processing it and how they’re dealing with it.  And how the town of Haddonfield is collectively dealing with it.  How people come together, whether for better or worse, makes for a very intense movie.

How has the dynamic changed between your characters in this movie?  Especially considering it picks up immediately where the first one left off.

Jamie Lee Curtis: I feel like what David (Gordon Green), Danny (McBride) and the company have done is they’ve really created a generation-skipping warrior.  Karen’s character is not a warrior.  She’s an unexpected warrior.  Allyson, I feel, has really embodied Laurie in a really powerful way, and we really see it in this film.  I feel like she’s just become Laurie, but (her) independence is also going to create tension in the future.  That’s all I’ll say.  I don’t know nothing about nothing, but I feel like that independent streak is going to cause friction.

Andi Matichak: Allyson always had a special relationship with Laurie.  She was one of the only people that believed her, but she was also one of the only people that would stand up to her.  I know (my character) got a lot of heat for telling Laurie to just “get over it” in the 2018 movie, but she and Laurie are one of the same, and I think a lot of the friction between Allyson and Karen, in both the last movie and this, is because Karen has to see a lot of Laurie in Allyson, the good and the bad.

Jamie, when Nancy Stephens and Kyle Richards returned to the film set, how was that in reflecting on the passage of time that has passed and realising the impact of the original film?

Jamie Lee Curtis: It was incredibly emotional.  There were tears.  Nancy Stephens and I were friends.  Nancy’s husband, Rick Rosenthal, directed Halloween II, and the production designer on that film, a man named Michael Riva, was my fiancé during that movie.  Michael died a few years ago, and Nancy and I have lost a lot of people.  We’ve all lost people, and the passage of time is exciting, but it can be brutal.  It’s emotional.  I’m an emotional person.  When I see Kyle Richards and I remember her as an 8-year-old! I was 19.  That’s crazy.  That’s emotional.  It’s not silly voices at a party, it’s deep and rooted. 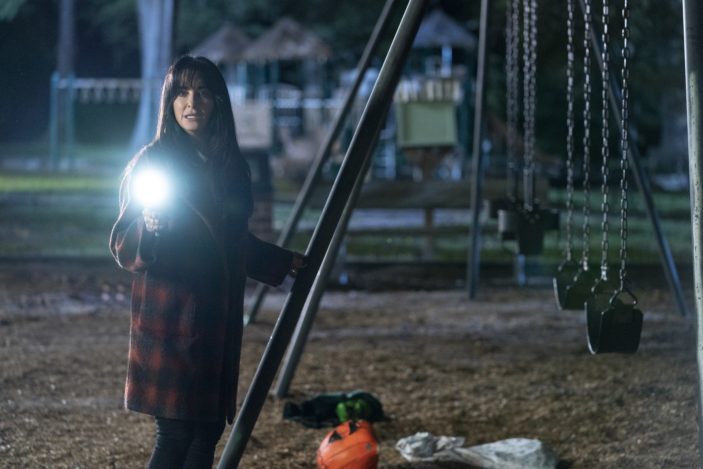 Kyle, how was it returning to these films after such a long time?

Kyle Richards: It’s so incredible that after 40 years to be reprising this role, but even more incredible than that is that people are so excited about (these films).  The fans have never gone away, they’re so passionate.  The fact that they can go see this in a theatre again and feel that energy is exciting.

How did you receive word on your role in the film, Anthony?

Anthony Michael Hall: I requested a meeting with David Gordon Green in the summer of 2019, and I was just excited he wanted to meet before my screen test.  We had a very organic conversation about what he wanted to achieve (with this film).  I kinda revved myself up for this screen test, so I was so thrilled that I got the call to say I was going to be a part of it.  I can honestly say that in my 45 years of working I’ve never been more pumped up for a role.

Kyle, you were 8-or-so years old when you made Halloween in 1978.  How old were you when you first saw that film and realised the impact it had?

Kyle Richards: When I first saw the film I was just a little girl at the premiere.  I never really understood what we were making.  I had made other scary movies, but I never really grasped just what type of film John Carpenter was making.  I invited my best friend from second grade to come to the premiere with me.  Why my mom said yes to letting us see the film, I’ll never know, but we went and we were traumatised! I’m still scared of the dark, so it had quite an impact on me (laughs).

In building these characters you’re not only projecting fear and trauma, but the perspective of a community.  What was the biggest challenge in accomplishing that?

Kyle Richards: For me, that was exactly what I built my character around.  As a little girl I didn’t have to think about (motivation).  I just read my lines and ran from Michael Myers.  But I could use that trauma as a child and how it has shaped her as an adult.  She stayed in this town with all these people, all these survivors, and they’re tired of being terrorised.  That’s what I used to build my character.

Anthony Michael Hall: I think Kyle can attest to this in that we had such a good script, so I just loved attacking that classic good versus evil set-up.  The fact that it has this massive audience after all this time is such an honour, so it gave me all the energy I needed.