Interview: Jake Gyllenhaal and Yahya Abdul-Mateen II on forming a brotherly bond on Ambulance, the safety of filming, and “directing” action sequences

Speeding into cinemas this week (you can read our review here), Ambulance is the latest action extravaganza from Michael Bay.  Starring Jake Gyllenhaal and Yahya Abdul-Mateen II as two brothers who hijack an ambulance following a bank heist gone wrong, Universal Studios put our own Peter Gray in touch with the acting duo to discuss the making of the film, their brotherly bond, and why Yahya is responsible for Jake receiving a “director” credit for the film.

My first question was going to be to the both of you about working with Michael Bay, but I understand, Jake, you took it upon yourself to direct some of the sequences yourself? So, how was it directing a Michael Bay movie?

Jake Gyllenhaal: That is impossible to even do, so obviously that never happened.

Yahya Abdul-Mateen II: I did this interview, and I was talking about how it was working with Jake on this movie.  I was being very descriptive, and perhaps a little too literal about some of the things needed to get the movie done…

Jake Gyllenhaal: He was making me look more interesting than I actually am (laughs).  That’s what he was doing.

Yahya Abdul-Mateen II: I was thinking Jake really needs the press, so how can I juice it up a little.  That story, I’ll take it.  It’s an all hands on deck experience, we’re working in a tight space, and for this particular scene there was a place where Jake was sitting that we couldn’t get the camera to, to the location to get the proper angle.  So, naturally, it made more sense to allow Jake to…

Jake Gyllenhaal:  He’s fumbling around with this.  I was sitting in the passenger seat, he was in the driver’s seat, and we were shooting a scene and we weren’t getting enough light.  So Michael, in Michael Bay fashion, said “You do it!”, and he handed me the camera.  I was in the passenger seat filming Yahya’s angle, because we would have to switch and it was too complicated and we were losing light.  And because Yahya is so handsome, I couldn’t stop filming him or looking at the screen.  They were literally trying to pry the camera out of my hands, and I wouldn’t let them.  So it became what it became, that I “directed” a sequence, which did not ever happen.  I just was holding the camera because I was mesmerised by his beauty.  That’s the story in a nutshell.

Yahya Abdul-Mateen II: I’m so sorry, I’m so admittedly embarrassed by that, man.

It’s really out there.  Like, everyone thinks you directed part of this movie.

Jake Gyllenhaal: Which is the most ridiculous thing anyone could ever say, especially about a Michael Bay movie.  But hey, why not?! Sure, he couldn’t have done it without me.

I think one of the great things we are seeing now is all of these films being made throughout the pandemic, and Ambulance is so loud and bold.  How was it making a film like this during COVID?

Jake Gyllenhaal: It was as you’d expect.  I’m sure you’ve heard.

Yahya Abdul-Mateen II: We were very grateful to be working.  It wasn’t lost on us how many people were not able to get up and go to work.  The effort that was being done to keep people safe… this movie, in some ways, pays homage to the first responders.  We wanted to make sure we were respectful of their representation.  It also felt good to get up and go to work knowing that, or hoping that by the time the movie came out it was going into a safe environment, into the theatres to have that safe, communal experience.  There was a lot to consider.  We did it fast.  We were shorthanded, but we were safe and we brought a lot of heart to it. 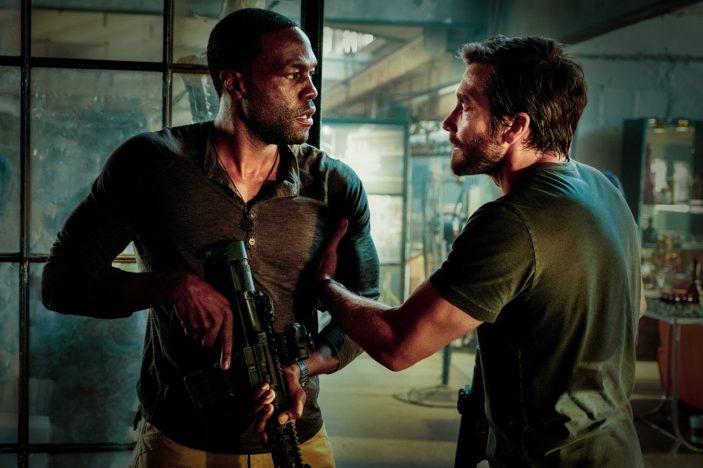 Jake Gyllenhaal: We didn’t.  I was grateful that when I met Yahya he was so kind and open-hearted.  He made it so easy to love each other as siblings, as brothers.  He’s a very smart actor.  He’s constantly asking the right questions, not the annoying ones.  And because of that he drew me closer to him.  I knew that he was going to be protecting his side of the bargain in a scene.  That just started from the very beginning.  I think we just had real respect for each other as performers, and our friendship… we didn’t really have a lot of time to make one.  We weren’t allowed to be (together) in person.  The first call we had together was on Zoom.  We talked twice on Zoom, saw each other once at a distance, and then we started to shoot.  So, it hasn’t been until now that we have really gotten to know each other as restrictions lift and we can get within two feet of each other, not in a scene.

It was easy like that.  It was easy.  And, frankly, I always loved his ideas, so that made it easy.  I doubt he liked mine, because I’m not the sharpest tool in the shed, but he definitely liked his (laughs).

Yahya Abdul-Mateen II: Nah, Jake was a class act.  A real pleasure to work with.  I’ve been fortunate to work with some real number ones, and Jake was excellent as being a leader on the set.  Really, really smart actor.  I knew within five minutes of talking to him about a scene that he was smart, and you can trust someone when you can feel that they’re a smart actor, because you know they’re driving in the right direction.  That meant that as long as I took care of my business, I had a partner that would take care of theirs.  That’s pretty much how it worked.

Jake Gyllenhaal: But there’s a lot of smart actors, Yahya, but I think it takes a lot of confidence to not be competitive in a way that isn’t about the other’s success.  I think both of us wanted the other to kill it and soar, and we were always encouraging that.  To me, that’s what’s fun about meeting someone who’s down for helping you and helping themselves at the same time.  And we both have very strong relationships with our siblings, so we brought that into the mix.  So, that fight in the ambulance came from us remembering bickering with our siblings in the back of the car.  Those ideas came from both of us talking about it.