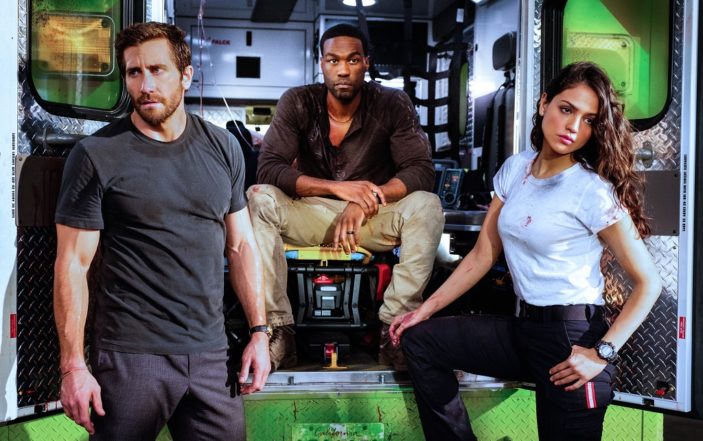 Say what you will about Michael Bay, but the man knows how to craft an action sequence.  Sure, throughout his career, said action sequences have been featured in the type of blockbusters that so often favour spectacle over substance, but he’s great at what he does and, really, no one is watching a Transformers movie for its deep narrative.

In Ambulance, the latest entrant into his Bayhem-heavy filmography, all the boxes are expectedly ticked – whether you like it or not – but, quite surprisingly, there’s a stronger emphasis on the characters at hand.  It certainly helps that such characters are played by reliable talent as Jake Gyllenhaal and Yahya Abdul-Mateen II, but at an indulgent 132 minutes Bay continually makes it known that he isn’t willing to give up his formula any time soon.

The plot – as penned by Chris Fedak (creator of the action/comedy series Chuck), based off the 2005 Danish film Ambulancen by Laurits Much-Petersen – is heavy on exposition and light on making a lot of sense, so we already know we are in good hands when Gyllenhaal’s unhinged Danny Sharp rings in adopted brother Will (Abdul-Mateen II) for a $32 million bank heist.  Despite the film’s length, it doesn’t take an awful lot of time for Danny to convince Will to jump on board – we learn that Will’s wife is in need of serious cashflow for an impending medical procedure – nor for the actual heist itself to play out, instead devoting the majority of its time to Danny and Will aboard the titular vehicle they hijack as their getaway transport.

Of course, nothing goes to plan as the police officer they gun down is taken on board by EMT Cam Thompson (Eiza González), adding extra baggage that the brothers just don’t need.  Once the quartet have all learnt their dynamic within the ambulance – and all we really need to know is Gyllenhaal is the crazy to Abdul-Mateen II’s calm – pure, unadulterated Bayhem ensues as vehicular insanity takes flight amidst typical implausibility, admittedly awe-inspiring camera work, and a level of self-awareness that stops just shy of the actors winking directly to the camera; a reference to his own 1996 actioner The Rock early on in the piece kickstarting this temperament.

As frenetic as you’d expect, Ambulance manages to blend the standard ingredients of Bay’s arsenal with a certain freshness, meaning the terrible one-liners and lack of nuance somehow earn our acceptance amongst its firing-on-all-cylinders mentality.  Only in such pure excess as what Bay has created here would we somehow readily accept an extended sequence where Will and Cam hold a mid-ambulance-speeding-chase conference call with Cam’s surgeon ex-boyfriend and two trauma specialists (mid-golfing, by the way) to pull a bullet out of our injured police officer.  Better yet is when his spleen bursts and she secures it shut with one of her hair clasps.  Classic Bay.

On the mention of Cam, González manages to avoid the Bayness adhered to for the majority of the Transformers films by being given a character that extends beyond mere window dressing.  A decade ago Cam would have been shaded with all the strokes afforded to the likes of Megan Fox or Rosie Huntington-Whiteley, but here she’s a valuable cog in the projecting machine that is forwarding the narrative, holding her own alongside Abdul-Mateen II’s reluctant accomplice and a dialling-to-eleven Gyllenhaal, who manages to increase his crazy with every ticking second without ever completely going too far off the richter.

Ultimately, Ambulance hasn’t been designed in any manner to entice the uninitiated, so if Bay has never been a filmmaker you have warmed to, this high octane lunacy isn’t going to change your mind.  For those who like their action movies heightened just enough – or if you’ve always wanted a Fast & Furious outing to be just that much more rich in bloody violence and F-bombs – this will more than satisfy.  After the grossly indulgent Netflix non-starter 6 Underground and a few too many aimless Transformers sequels, Ambulance is easily the best thing Bay has done in years, existing as a richly ridiculous reminder that no frills and the reliability of proven talent can work wonders for his unique sensibility as a genre main-stay.