Interview: Freaky star Kathryn Newton on swapping bodies with Vince Vaughn and her love of the horror genre 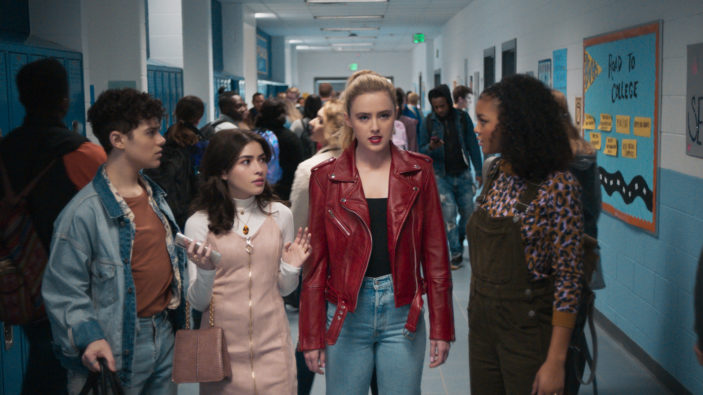 Christopher Landon‘s self-described “batshit crazy” body-swap horror movie Freaky is getting ready to be unleashed in Australian cinemas this week, and to coincide with its impending release The AU Review’s Peter Gray was fortunate enough to chat with the film’s lead actress, Kathryn Newton.  After the Big Little Lies alum noted that making scary movies are really anything but, she discussed the collaborative process between herself and co-star Vince Vaughn and how she felt knowing the director thought of her when wanting to cast a serial killer.

I was fortunate enough to speak to Christopher Landon (Freaky‘s director) last month when the trailer dropped and asked him about the process of yourself and Vince Vaughn essentially playing each other.  Can you expand on that, because Vince was clearly having a great time as a teenage girl.

I know! He brought this up in an interview earlier and I had forgotten about it.  We (Chris & I) had a day together where he recorded me, as (my character) Millie, ordering a salad and then eating, and he sent that to Vince.  And I thought “Do I get a video of Vince?” I don’t know what he (Vince) did with that footage but for me as an actor it was something I loved.  It made me get over myself.  It didn’t really matter who the video was for, it was more that I could start making this character come to life.

When it came to The Butcher I had no idea what to do, I couldn’t believe Chris thought I could be a killer, I just don’t think that way.  I don’t have that mind, Chris Landon does, he has a sick and twisted mind – in the best way – but I don’t, so I thought this is going to be different and exciting, and when I met Vince it was in dance rehearsal and we were making just fools of ourselves.  I think when you have somebody like him who’s such a great actor down to play anything, it changes everything for everyone.  That type of collaboration doesn’t just happen.

He really brought me up too, asking me who I thought Millie was, who I thought The Butcher was…so it really just created this team between the two of us.

You mentioned that you didn’t think you could do it, and Christopher Landon said that you were the person he had in mind for this character.  What did you think when you read the script?

It makes me so happy.  I was lucky enough to work with him on Paranormal Activity 4, and (producer) Jason Blum as well, and I wanted to work with them (again) ever since.  I had so much fun making that movie and I learned so much about horror films.  I feel like horror movies are so different from other movies in the way they tell their stories.  When I read this script I thought it was so perfect for me.  I didn’t know if it was something I could pull off but I did know that it was a great opportunity that I couldn’t turn down.

I mean, who gets to play a serial killer and a teenage girl on the same day? Michael Kennedy and Chris Landon killed it on this script.  It’s a reflection of our times, and it’s not silly, it breaks all these tropes and cliches that you see in movies, like we destroy “the final girl” but we still have her and I love that.  I love a scream queen.  I love these jokes that are kind of iconic to the horror genre and that we still have them but we twist them to surprise the audience.  And we have seen movies like this before, you know I love Freaky Friday and The Hot Chick, and this movie has that vibe.

I grew up on horror films and I especially love slasher films, but I’ve noticed a pattern with the actors in these films that they tend to actually hate these types of movies.  Where do you stand with these films?

I definitely don’t hate them.  I think I was about 12 when I started watching them, that age where your parents would sit in the row behind you and your friends, watching the movie screaming and holding hands.  I honestly started with the Paranormal Activity franchise, watching those with my friends at midnight showings.  And then it was Jennifer’s Body where I remember being really scared, and then filming Paranormal Activity 4 I was invited to the Sinister premiere, and I went by myself and I was so scared.

I was gripping the chair and so uncomfortable that I ended up leaving and calling my mom.  I don’t know if I’m too empathetic or if I just believe everything…but I do take those movies home with me.  They stick with you if you let them.  I always ask myself why do people like horror films? But I think there’s this amazing thing where you know what you’re getting yourself into when you watch one and you let yourself go on that ride, and I love that.

I was not expecting a Jennifer’s Body mention.  That movie is so underrated!

Diablo Cody is a genius!

It must be great that Freaky is going to be seen in cinemas too.  Here in Australia we’re fortunate that things are back to a sense of normalcy and we’re getting the film November 12th and I very much intend to see it again with an audience because I want people to experience this film.

Thank you, that’s so great that things are back to normal in Australia.  Pass it over here!