Interview: Ethan Hawke on embracing his horrific character in The Black Phone; “The unknown is where a lot of the fear lives” 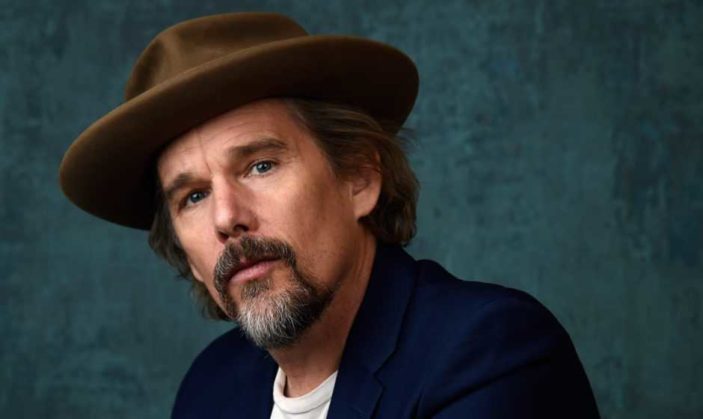 It would seem in Hollywood, the nicer you are, the more evil you’re able to play.  So, it would make sense that Ethan Hawke, continually referred to as one of the industry’s nicest guys, would excel so at portraying the embodiment of terror.

Reuniting with his Sinister director Scott Derrickson, Hawke’s portrayal of child abductor The Grabber in The Black Phone has earned him rave reviews and added a further feather to his already impressive career cap.

Talking with Peter Gray ahead of the film’s local release during its global press conference (you can read our review here), Hawke touched on embracing villainy, what he finds truly scary, and what he’s most proud of throughout his near four decade-long career.

I read in a past interview somewhere that throughout your career, you’ve been kind of hesitant to play the full-on, 100 percent, “here I am” villain role. So now seeing you having fun with this character in this film at this stage in your career, what has made you embrace a character such as The Grabber?

You know, I don’t exactly know how it happened. I remember when Scott (Derrickson) first sent me the script, I warned him before he sent it. I said “I’m dying to work with you again. But there’s, it’s very unlikely that I will do this movie because I, for years, have had this theory about Jack Nicholson, his whole career changed when he played The Shining.  And that, you know, once you unveil your madness, your evil side for the world, they can’t unsee it.”

I’ve always been, you know, sensitive towards doing that. But then I read it. And I felt it was so much fun. The script was so good. And I’ve just enjoyed Scott’s work. I love doing Sinister. And I thought to myself, well, you know what? I’m 50 years old. Maybe it’s time. You know, it’s time to change the map and start embracing my inner Grabber. And I’m glad I did. You know, the mask work part of it was really fun. And it also felt in service to something about the story that I just love, you know, the idea of a horror movie coming of age drama, combined, you know, worked for me.

Speaking of the mask work, what was the process like with figuring out the mask and which parts were going to be taken off or added for each kind of section of this film?

You know, the man who designed the masks is a brilliant designer and he and Scott had the idea that wouldn’t it be interesting if the mask constantly evolved, so it had one kind of iconic image, but that it was constantly changing .Smiling, frowning, no mouth, the left side of the face, the right side of the face, the top, the bottom.  Any mask work gives you a sense of playfulness, and it makes body language so important and it makes vocal work so important.  The idea that the mask itself was evolving, and could say something about who the character was, it was so fun to have all these different masks out and decide which one to wear for which scene, and Scott always had really good ideas about what he wanted.

And it was so new for me playing this type of horrible human being.  And also there’s aspects of Greek tragedy at work, right? You know, those old fashioned Greek dramas where you’re representing this evil ID of the universe.  We were just playing. And like, it’s midnight, and you’re sitting around a campfire, and you’re just telling everybody a spooky story. And you get really into it. You know, that’s the fun of this genre.

Did you yourself sort of come up with a backstory for all of those different personalities pertaining to the mask?

I tried to. It was harder the more I thought about it, the more I kept coming up to this analogy of a broken computer that it almost doesn’t make sense. You don’t understand why it’s skitzing out. It’s short circuited.  And so the more I tried to make sense out of them, the answers always seemed a little not right.  And I instinctually just feel that so much of evil and arrogance, abuse is created out of insecurity and that there’s some deep, deep insecurity at work that’s desperate to cover itself up with the mask and and simultaneously wants to be known. But it’s all broken. So in no way is this person healthy at all. And so that’s what’s challenging about us just playing something that doesn’t make sense. 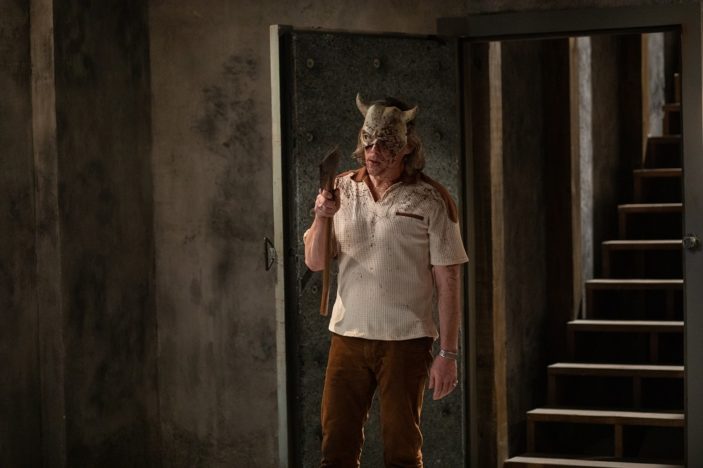 I wanted to talk about the scares in the film.  One of the scariest moments in the movie is when you first leave the door unlocked for Finn, and we get the tracking shot up the stairs to The Grabber sitting shirtless in the kitchen.  And I want to know from your point of view, what is it about the silence and the stillness that can be just as effectively as scary as what could have been just a jump scare? What is scarier? What is scary about the silence and the stillness of your performance?

You know, I guess the darkness, the unseen, is always the most terrifying to us. Mystery. Unknown evil.  Seeing other skin than the face is also terrifying. He’s not Darth Vader, he’s some other entity. And the more you see him breathing, but you can’t read the expression. Is he asleep? Is he not asleep? Is he? I found all that. The mystery of the unknown, you know, the ocean is terrifying to us.  Outer space.  Things we can’t understand. Why is this person so awful? What is motivating them? That unknown is where a lot of the fear lives. And Scott’s very good at mining those tropes.

You’ve been working close to 40 years as an actor and writer, and you’re still very, very busy.  What keeps you going? And then looking back, are you satisfied with your career? And what are you most proud of?

That’s a rather deep question.  My short answer is that I fell so hard in love with this profession, that one lifetime is not enough to master it.  You have certain things you can offer as a young performer that are lost, that you can’t do anymore, but there’s certain things that you gain.  And I’ve been fascinated at how the profession keeps changing for me.  I’m grateful to still be able to act.  I can’t believe that it’s that as you said, you know, I did my first movie in 1984, so I’ve been doing this a long time. And it’s still really new to me. I just feel like every filmmaker I work with has a viewpoint that is fresh.

You know, working with Robert Eggers this year was a totally new experience for me. The way that he thinks about movies is very different than the way Richard Linklater, Scott Derrickson, or Antoine Fuqua think about movies. They all share a love of storytelling, and a passion for craft and pursuit of excellence. I like to do different things.  I made a documentary this year about Paul Newman and Joanne Woodward, that that has been really interesting because I’ve been studying other people who did my profession at a very high level for 50 years, and watched how they grow and change.  And, you know, young actors are pretty much the same everywhere, which is that they’re concerned with themselves and making an impression,  and if you expand in your work, you start getting really interested in us, in all of us, in what the profession itself can offer, not just what you can offer.  And that’s exciting to me, because then the room gets a lot bigger and more interesting.

The Black Phone is screening in Australian theatres from July 21st, 2022