Film Review: The Black Phone is equally unnerving as it is emotional 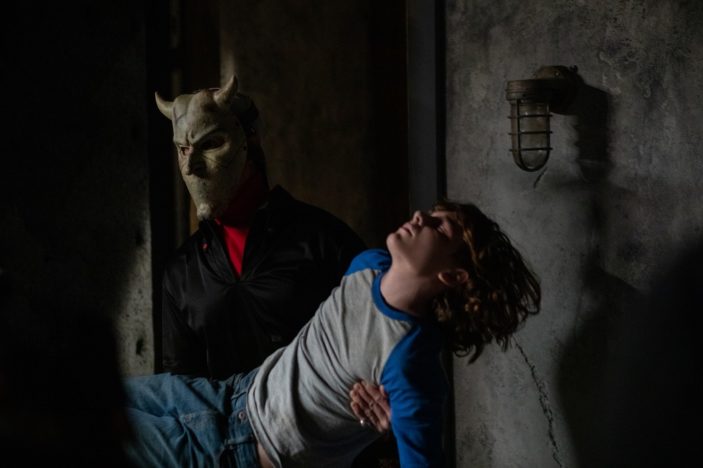 Scott Derrickson has always found a way to blend his horror sensibilities with a certain sense of emotion.  The Exorcism of Emily Rose incorporated the mentality of a legal drama to explore its themes of demonic possession; Deliver Us From Evil unearthed an other worldly entity amongst the trappings of a police-centred thriller; and Sinister placed a troubled family at the core of a supernatural fable that delighted in its violent temperament.

Striking that balance once again – perhaps in his finest effort yet – Derrickson melds the genre thrills of The Black Phone, here both supernatural and abduction-based, with a coming-of-age story that speaks to his intelligence of how to navigate a horror picture beyond mere jump scares and cheap thrills.

Innocence is fleeting throughout, despite the film’s child-centric view, as young siblings Finney (Mason Thames) and Gwen Shaw (Madeleine McGraw) are forced to grow up before their time under the abusive hand of their drunkard father, Terrence (Jeremy Davies); “Take care of dad” a usual line shared between the two as they look out for each other whenever his hands are free of the bottles he downs consecutively.

Even before we get to Ethan Hawke‘s predatory child abductor – local media have dubbed him “The Grabber” – The Black Phone, set in 1978, laces itself with a certain fear that suggests how on edge Finney’s existence truly is; Gwen, despite being younger, seems far more capable in certain situations though.  The opening credits mix the childhood past-times of baseball games and DIY rocket sets with missing child posters and lost shoes, whilst the adorability of Finney being tongue-tied in front of a pretty girl in his class is offset with the fear he harbours of being cornered by the school’s bullies.  Innocence is never guaranteed here.

Following the disappearances of several other young children in the neighbourhood, Finney becomes the latest victim of The Grabber, snatched in broad daylight after a planned run-in that the young boy realises is a trap seconds too late.  The intensity in which The Grabber executes these abductions speaks to Derrickson’s strength as a genre director, a muscle that only braces as the film runs on.

Locked in a basement, with only a singular rotary phone adorning the walls, Finney soon realises that only he can hear it ringing, conversing on the other end with previous Grabber victims who are determined to offer their solace and urge him to escape.  To this point The Black Phone has operated a relatively steady mentality, yet the introduction of this more supernaturally-inclined element feels entirely organic to Derrickson and C. Robert Cargill‘s proceedings.

It’s of immense benefit to the narrative – which is based off Joe Hill‘s short story of the same name – that this supernatural additive is paralleled in Gwen’s own story.  Through a psychic ability she has seemingly inherited from her late mother – this a point of contention between herself and her volatile father – Gwen is brought in to assist the police in uncovering the whereabouts of The Grabber’s victims.  And as much as this film is centred around Finney and The Grabber, with both Thames and the terrifyingly unpredictable Hawke (who’s mostly covered throughout the film by a series of personality-shifting masks) pitch perfect in their respective deliveries, it’s McGraw who walks away with the film, managing to avoid the precocious child trope with a foul-mouthed, yet kind-hearted edge.

A tightrope act of a film that utilises silence masterfully and knows never to overstay its welcome, The Black Phone, as unnerving as it proves to be throughout, manages to speak to the persistence and ultimate strength there is in children helping their own.  So often failed by their surrounding adults, The Black Phone works off that emotional core, resulting in a tight-knit mystery that voids itself of genre predictabilities in spite of such recital familiarity.

The Black Phone is screening in Australian theatres from July 21st, 2022.