Interview: Emma Mackey and director Frances O’Connor on Emily; “People keep trying to make you think there are rules in cinema.  It’s not true.” 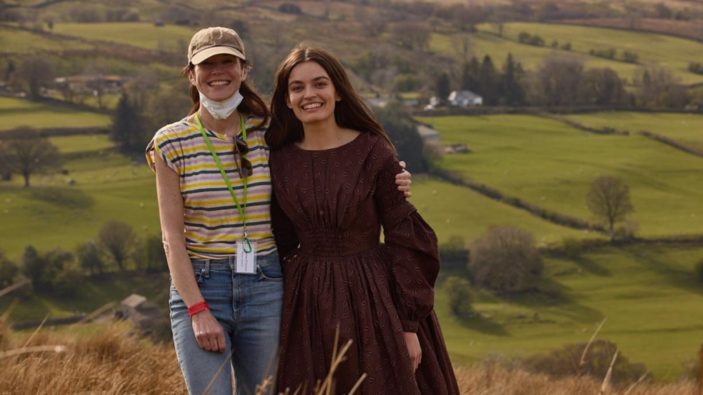 Emily tells the imagined life of one of the world’s most famous authors, Emily Brontë.  The film, written and directed by Australian actress Frances O’Connor (in her directorial debut), stars Emma Mackey as Emily, a rebel and misfit, as she finds her voice and writes the literary classic “Wuthering Heights”; further exploring her raw, passionate sisterhood with Charlotte (Alexandra Dowling) and Anne (Amelia Gething); her first aching, forbidden love for Weightman (Oliver Jackson-Cohen), and her care for her maverick brother (Fionn Whitehead) whom she idolises.

As the film arrives in Australian theatres (you can read our review here), before arriving in North America next month, Peter Gray spoke with Frances O’Connor and key cast-members, Emma Mackey, Alexandra Dowling and Oliver Jackson-Cohen, ahead of its world premiere at TIFF last September about collaborating on the project, Australian ties, and familiarity with the source material.

How did this film come about for you, Alexandra?

Alexandra Dowling:  I auditioned with a self-tape.  I actually did the whole thing online, because it was COVID, so I didn’t even meet Frances (O’Connor, director) in person…

Does that make the audition process easier or harder?

Alexandra Dowling:  In a way it actually makes it easier.  You’re in the comfort of your own home, and you always get a little nervous making that trip into town (to audition) (laughs), so I think it helped, for sure.

Were you familiar with the works of the Brontë sisters? Was it literature you grew up with?

Alexandra Dowling:  Yeah, I actually did “Jane Eyre” as a school play, when I was about 14 or 15.  I played Jane, and that was one of Charlotte Brontë’s novels (who I play), so when I got the script knowing I could read for Charlotte Brontë…it was a huge deal for me.  I already felt very connected to her through the character of Jane, even though it was from when I was a teenager, but that stuff does impact you.  It’s kind of full circle.  I think this speaks to a lot of young girls (too).

And you’re working under Frances O’Connor.  Was there a different mentality on a set under a woman’s rule?

Alexandra Dowling: Oh, it was a beautiful set.  You obviously get a lot of sensitive men, but a female director and DP, you have these two very sensitive, gentle women at the helm.  I just love that.  It creates a totally different energy to a lot of sets.  And having an actor-director as well makes for a huge difference. 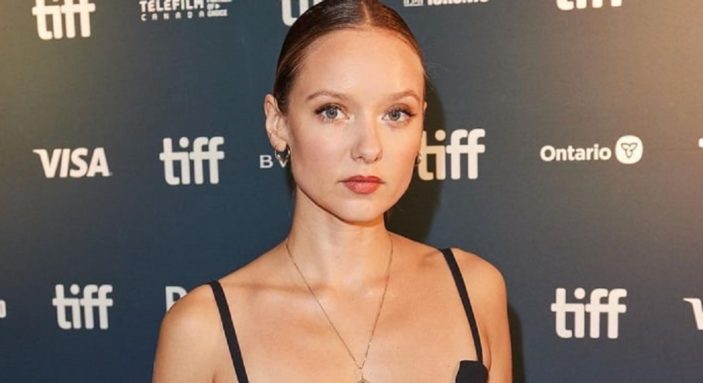 I’m going to be a bit biased too and say Australians are pretty great people, too.

Alexandra Dowling: (Laughs) Yes! I was going to say…I actually have family in Australia.  Shout out to all the Aussies (laughs).  Where abouts are you from?

Alexandra Dowling: Oh, my family is there too.  That’s how I actually know that city (laughs).

Frances, congratulations on the film.  You’re at TIFF with your first film as a director.  You’re doing alright.

Frances O’Connor: Oh, thank you.  Yeah, I went further than I thought I was going to go.

You wrote and directed this film.  What was it about not just Emily, but the Brontë sisters that made you want to tell this story?

Frances O’Connor:  Out of the Brontë sisters, Emily has always been the one that’s been the most hidden.  I think she was quite a private person, and yet her book has gotten so much creative energy and passion in it.  I think the juxtaposition of those two things is really interesting.  That was my starting point, and I was doing all the research I started to think about this woman who was kind of struggling to accept who she was, and then she comes into her own sense of authenticity and power.  I thought that would be a great story for the women of now. 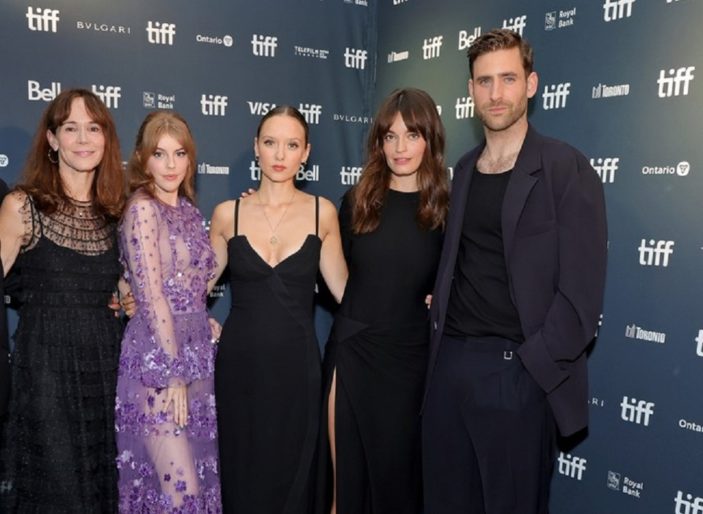 I asked Alexandra about the audition process.  Did you find it difficult auditioning people over Zoom?

Frances O’Connor:  I did, yeah.  We couldn’t really do chemistry reads.  I knew I wanted Emma (Mackey), and there were a couple of people we were thinking of, but I just couldn’t get them together because logistically it was too difficult.  And then we lost a few people because their day shifted because of COVID.  Everything was shifting for people, and that was frustrating, but the people I ended up with are all so great.

Is directing something you think you’ll keep exploring now?

Frances O’Connor:  Oh, yes.  I really want to keep exploring writing and directing.  I’d like to concentrate on solidifying my style.  And then work on other things with other people…but the next thing I’d like to direct is something I have written as well.

Oliver.  You’ve made a film in Australia.  You’ve been directed by an Australian.  Should we just claim you now?

Oliver Jackson-Cohen:  Please do, please do.  And Frances is just incredible.  She actually told me about this film she had written about 10 years ago, and then she gives me a call telling me about this Emily Brontë movie…

Oh wow, so she knew she wanted you for the part the whole time?

Oliver Jackson-Cohen:  Oh, no, I’m pretty sure she couldn’t get who she originally wanted (laughs).  It’s sort of nuts.  She’s a phenomenal actor and, I think, an even more gifted director. 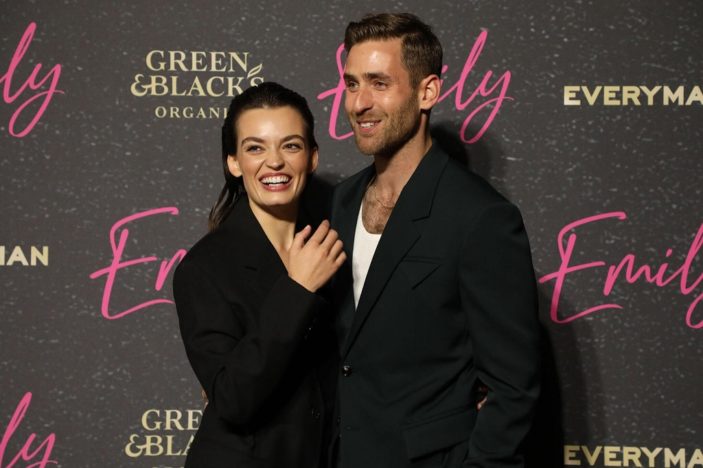 Do you think Frances being an actor herself changes the dynamic on set between director and the cast?

Oliver Jackson-Cohen:  Oh, absolutely.  It’s like she knows how to speak a different language.  I think the fact that there’s so many actors becoming directors and they’re turning out such beautiful work…there’s such an understanding to the process.  I’ve been really lucky to work with quite a few actor-directors, and they’ve all been incredible experiences.  Actually the greatest experiences of my career.

Emma Mackey:  She has that knowledge and that foundation.  She has an incredible acting career behind her, and ahead of her, and she’s very enriching.  Does that make sense? She just fills every scene.  She’s so involved in each moment and thoughts the characters have.  She really knows to make sure we understand where our characters are at in that moment.  It’s great to work with someone who has that level of understanding.

Was Emily Brontë someone you read growing up? We all that one book we had to read at school, right?

Emma Mackey:  Oh, it was “Wuthering Heights”, absolutely.  This book means so much to people, and it’s something that so many people have questions about and are still trying to figure out.  It’s a slap in the face of a book, and I read it when I was much too young.  It felt easier then than it does now though.  I feel like I read it in a much more analytical way later in life, which isn’t the best way to read it.  You just need to let it happen to you.  Very much like this film.  You can’t really put a pin (on the film).  Is it a biopic? Is it historically accurate? It doesn’t matter.  There are no rules.  People keep trying to make you think there are rules in cinema.  It’s not true.  And I’m realising that more and more, and it’s really great to feel that.  You’re allowed to be more open and run wild with your imagination.

Well, just quickly, one movie that I’m very much looking forward to that I feel won’t play by the rules is Barbie…

I know you’re not allowed to say anything…

But I am so excited!

Emma Mackey:  Me too!  It was the best.  I had such a great time doing it.  So incredible.

And working another Aussie…

Emma Mackey:  Oh, my God, of course. (Laughs)  I was thinking “Who are you talking about?”, oh, only Margot Robbie.  She’s incredible.  She’s an absolute ray of sunshine.

Emma is now screening in Australian theatres. It will be released in North American theatres from February 17th, 2023.