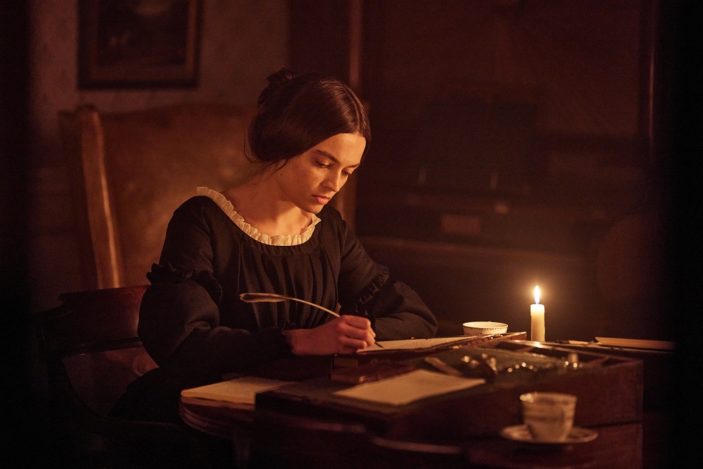 “It’s an ugly book, full of selfish people who only care for themselves” isn’t exactly the sterling praise one would reap upon something as treasured as “Wuthering Heights”, but it is how author Emily Brontë’s work was described by her older, more traditional sister Charlotte upon finishing it; or, at least, that’s how Frances O’Connor would have it in Emily, an at-times non-conventional, part-fictional biopic that focuses more of Emily as an enigmatic person, rather than an author.

“I took my pen and put it to paper” is Emily’s defiant response, with the film immediately setting up an occasionally icy dynamic between the two that O’Connor – the Australian actress making her feature debut as a writer and director – lets fester over the course of its 130 minutes; Emma Mackey and Alexandra Dowling both turning in uniformly fine performances – Mackey especially – as Emily and Charlotte, respectively.

Brontë purists might stick their nose up at what Emily has to offer, so it should be noted that O’Connor’s work leans more into fiction than fact, twisting as it sees fit to suit its narrative.  By no means does this hinder the film, but those with a penchant for historical truth best look elsewhere, as Emily frames the author as the recluse she was believed to be known as and expands on her eventual transformation into a woman who will no longer let Charlotte’s view of her as a social outcast define her.

Whilst Charlotte hopes to bring out the best in Emily by having her join her at the school she teaches at, Emily’s homesickness sends her to the comforts of her bedroom, furthering Charlotte’s worry that there’s something wrong with her.  Thankfully, Emily is smart (and wily) enough to not succumb to her own doubts, joining her mischievous brother (Fionn Whitehead) on a series of late night adventures and entertaining the thought of fornicating with the handsome William Weightman (Oliver Jackson-Cohen), a curate, now French tutor, in the process.

As the film opens on Emily seemingly in the final hours of her young life – she died at the age of 30 – with only her sisters, Charlotte and Anne (Amelia Gething), surrounding her, the film telegraphs that the two men she loves won’t be consistent figures in her existence, despite their obvious impact on her heart and writing.  Though all of the Brontë sisters were writers, it’s predominantly only Emily’s that gets any light across O’Connor’s script, and even then it’s a fleeting ingredient in a life that the filmmaker takes liberties in showcasing; Emily’s eventual opium addiction and occasionally detached psyche suggesting a fantasy element that the film delights in entertaining.

Sporadically witty and shot with a jarring affinity that reflects the character’s own self-consciousness, Emily should easily satisfy those with an affection for emotionally-charged period dramas.  Just don’t wax lyrical on its accuracy, it never claims to be a true story, so embrace its distinct originality, O’Connor’s directorial confidence, and Mackey’s mesmerising performance.

Emily is now screening in Australian theatres.  It will be released in North American theatres from February 17th, 2023.