Interview: Director Shekhar Kapur on What’s Love Got To Do With It? and the emotional throughline of his varied career 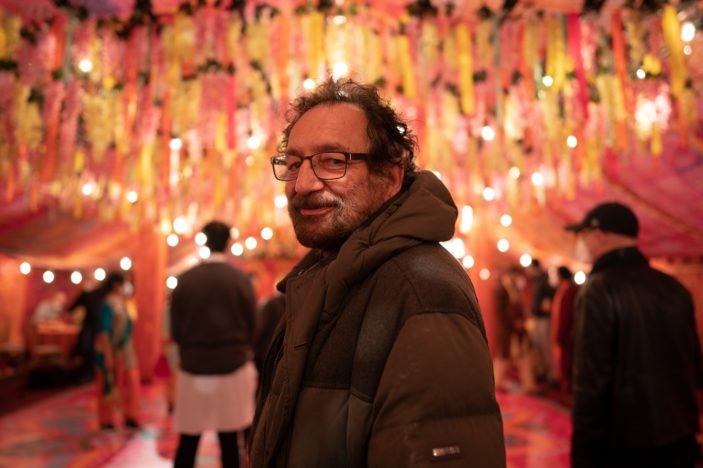 How do you find lasting love in today’s world?

For documentary-maker and dating app addict Zoe (Lily James), swiping right has only delivered an endless stream of Mr Wrongs, to her eccentric mother Cath’s (Emma Thompson) dismay. For Zoe’s childhood friend and neighbour Kaz (Shazad Latif), the answer is to follow his parents’ example and opt for an arranged (or “assisted”) marriage to a bright and beautiful bride from Pakistan. As Zoe films his hopeful journey from London to Lahore to marry a stranger, chosen by his parents, she begins to wonder if she might have something to learn from a profoundly different approach to finding love.

Such is the premise behind What’s Love Got To Do With It?, the charming new film from Working Title Films, the producers of Bridget Jones’s Diary and Love Actually, and directed by BAFTA Award-winning director Shekhar Kapur.

Ahead of the film’s national release (you can read our review here), our Peter Gray spoke with Kapur about his varied career as a director and the emotional throughline of his films, the collaborative nature on set, and letting Emma Thompson run wild and free.

Emotion is something that runs through all your films, and I appreciated that in What’s Love Got To Do With It?, but it also has the aesthetic of a romantic comedy.  How was it for you to inject cultural importance into that type of genre?

I’m not unfamiliar with making romantic comedies, because I started out making films in Bollywood.  They’ve always had a lot of drama and a lot of comedy.  A lot of romance and a lot of action.  They’ve been the whole package.  The idea of seamlessly going between drama and comedy isn’t unusual, or unfamiliar to me.  It’s not something I’m worried about.  I’m more worried about everyone trying to slot films into genres.  (That’s) making films too particular about something.  If you talk about it like it’s life, everything is there.  So, for me, it was a very lovely, lovely thing to do.  Something I’m familiar with.  It was beautiful.

Even in Elizabeth there was the Duke of Anjou, if you remember that film and that character, and he was a completely comic character.  I pushed for that character aspect.  And it’s the same here with Emma Thompson.  She was lovely.  One day we’re going to have a film that’ll just be the outtakes of (her character).  She’s so funny!  There was a little bit of hesitancy on cultural issues, but I was never afraid about her going too far.  The naivety of (her character) Cath is what keeps coming across.  It’s fantastic.

I was going to ask about Emma Thompson.  She’s such a delight and just lights up the screen whenever she’s on.  Was she someone you specifically knew you wanted for this role?

Oh, yeah.  I knew Emma Thompson was the right person for this.  It’s not a difficult decision.  She can do anything she wants (laughs).

Casting is obviously key, and the ensemble here have a very natural chemistry between them.  Was it an extensive search in finding Shazad Latif, Shabana Azmi and Lily James?

Well, Lily I knew as an actor.  And Lily and I talked a lot on WhatsApp.  I was up in the mountains in the Himalayas and she was in London, and we would speak (that way) and got to know each other quite a lot.  We kept talking about “What is intimacy?”, and I felt like I already knew her when we met.  Shazad, I hadn’t seen anything he had done.  I auditioned him and I liked that there was something about him that was very still.  I said to Lily that the way I envisioned her character (Zoe) is that she is inside a tumble dryer.  There’s this constant chaos in her mind, going round and round.  I latched onto a certain aspect of Zoe in that so many young people today are wanting to find someone, their “soulmate”.  They’re wondering if they are missing out, and they have all these apps, and it’s causing them so much anxiety.

For me it was so important that the person countering her in this frenetic life that she leads is still.  He looks like he knows what to do.  Like he knows everything.  And I saw that in Shazad.  He felt still.  He felt firm.  He felt like someone you could depend on.  I was lucky.  But I’ve always been lucky with my cast.  If the actors come through, then I come through.  And if they don’t come through, I fail.

It’s obviously a story that has some resonance with you.  How did Jemima Khan’s script come to you? 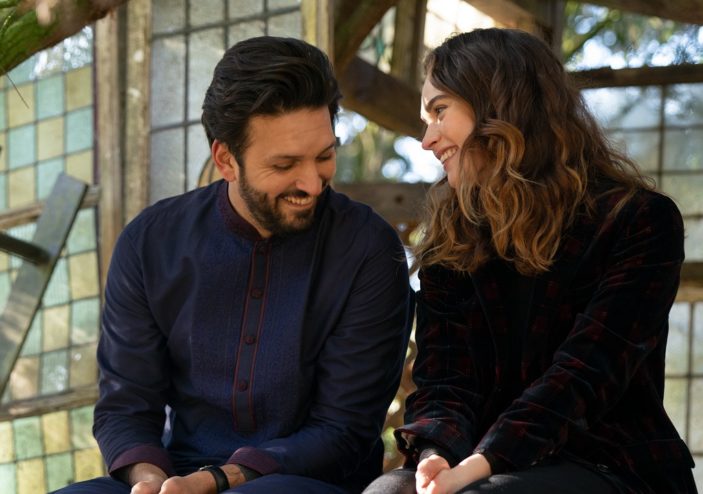 Watching this film it has that air of someone is directing who has made romantic comedies their whole career.  It feels very assured.  As you said that with making the Elizabeth films, did you find yourself being offered the same types of stories and it was then a conscious effort on your part to find stories that didn’t correlate with each other?

I always make that decision.  You’re right, it was a conscious effort to not do the same thing again.  Otherwise you just fall into that trap.  Why are you doing it?  If you’re not looking to grow within yourself and find something that you didn’t know, then why are you doing it as an art?  For me, every film is a way to discover something within myself that I didn’t know.  An emotion I didn’t know I had.  And if I feel I can discover myself in that film, then I know I will do it, and I felt that with What’s Love Got To Do With It?  I’ve never done anything contemporary before, and this was something I knew would challenge (me).

Did you add anything to the script itself?  Or do you have those words and let them stay as written? How collaborative a process was it with Jemima?

Jemima and I were constantly collaborating.  We had those conversations during rehearsals, and I always rehearse before shooting on set.  And Jemima and I would let the actors discover the characters too, and we had to give them the space.  I’ve always done that.  Any film I have done I allow my actors the space.  Otherwise I feel like you’re just play acting, and the only way to stop yourself from play acting is to find the character inside of yourself.  Lily did that quite brilliantly.  She found Zoe inside of her.

Speaking of Lily finding Zoe, and you mentioning the entire film of Emma Thompson outtakes, was there a lot of room for improv on set?  Is that something you encourage?

I allow the actors a lot of improv, but when you’re doing a film of this kind, it’s very tightly written.  Because of the emotion needed we would stick to the script for a lot of scenes, but then I would ask Jemima if she’s OK with what we have got and if improv is then something we can explore.  It was collaborative that way (too).

And it feels as if the industry is making small steps forward in regards to representation, whether that be culturally or through depictions of sexuality, and the manner in which Pakistan is presented here is really quite joyous, which is very much at odds with how it’s predominantly seen through the eyes of a westerner.  Do you feel there’s been those steps put forward?

I think so, yes.  But then sometimes it goes the other way.  I had someone ask me if I would cast an African American as Elizabeth, and I think the pendulum swings the other way.  Particularly with this film, I didn’t see it as a Pakistani family.  I just saw it as a family.  It’s a family I’m familiar with, because I’m from India, but it’s how families react.  Once the family comes on screen and you see how they interact with each other I could see (the audience) settle.  The film then goes away from being a “rom com” and becomes a very emotional film that everyone can relate to.

What’s Love Got To Do With It? is screening in Australian theatres from January 26th, 2023