Film Review: What’s Love Got To Do With It? is an agreeable romantic comedy that answers its own question with charm and vigour 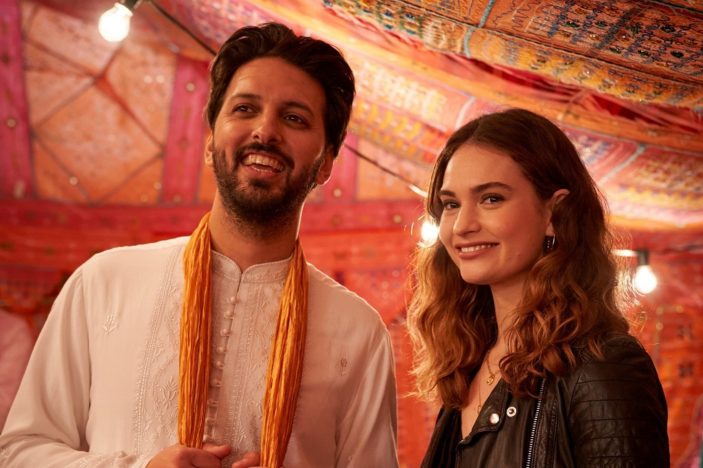 Don’t let the title fool you, What’s Love Got To Do With It? has nothing to do with Tina Turner.  Instead, the titular question is a rhetorical of sorts that documentary filmmaker Zoe (Lily James) ponders when she hears that her life-long best friend (Shazad Latif‘s Kaz) is interested in an arranged marriage, and subsequently what, in this day and age, such an agreement could look like.

Kaz is a catch, quite simply, and perhaps we won’t be too surprised if Zoe starts to work on her own unexplored emotions during a rather unideal time (it is a romantic comedy, after all), but as he’s done with dating apps and believing in that “fairytale” of a relationship, he looks to his parents (Shabana Azmi is beautifully regal as Kaz’s mother, Aisha) to organise a match, even if it’s as simple as finding a woman they all agree upon; one of Kaz’s driving points seemingly stemming from the shame his sister brought to the family by defying tradition and marrying a white man, resulting in a shunning that has denied them the chance to meet her daughter, Aisha’s own granddaughter.

Zoe, all western, modern, and not understanding how someone as clearly desirable as Kaz couldn’t factor in the notion of falling in love with someone as a standard for marriage, looks at his situation as prime film fodder, pitching this tradition in a 2023 landscape to a duo of excitable-enough producers (“Love, Contractually” is the rather amusing working title) and shadowing Kaz as he sets about the process; awkward singles mixers and an entertaining meeting with a professional matchmaker (Asim Chaudhry) the start of his journey.

As Zoe goes about filming Kaz’s journey on a one-woman shoestring budget – and perhaps not exactly staying objective in her line of questioning – she has her own matchmaking going on, with her kooky mother, Cath (an absolutely joyous Emma Thompson, practically stealing the film at every moment), fretting that she’s destined for a life of spinsterhood, trying to set her up with every man under the sun.  Though she ends up with the actually quite charming James (Oliver Chris), an appealing veterinarian, her heart isn’t in it enough to give him the chance he so clearly deserves.

As much as What’s Love Got To Do With It? abides by the rules of a romantic comedy, director Shekhar Kapur (Elizabeth, The Four Feathers) and screenwriter Jemima Khan (lifting from her own life experiences) inject a certain depth to proceedings, celebrating the notion of an arranged marriage through the eyes of a family upholding their own traditions.  It’s Zoe essentially having to check her white gaze at the door here and open herself up to viewing Kaz’s decision from his perspective, and just because it doesn’t make sense to her doesn’t mean it’s wrong.

Given that it is detailing such cultural importance, What’s Love Got To Do With It? isn’t always firing on all cylinders as a comedic product.  It’s not without its laughs though, but there more sporadic throughout as Kapur and Khan ultimately favour tradition and the respect of such a practice; Thompson is essentially left to do the heavy comedic lifting and, it goes without saying, she champions as much with an effortlessness.

A likeable, relaxed effort that delves just deep enough to elevate itself beyond genre simplicities without entirely investigating the obviously-interesting narrative at its core, What’s Love Got To Do With It? is a suitably winning product that – thankfully for the dreamers – answers its own question with enough charm and vigour.

What’s Love Got To Do With It? is screening in Australian theatres from January 26th, 2023.