Interview: Director Renée Webster on How to Please a Woman and finding the comedy in truth and pain

Having played to sold out festival sessions across Australia, the female-focused dramedy How to Please a Woman is looking to continue its crowd-pleasing success when it opens nationally in Australian cinemas on May 19th.

Ahead of its release, Peter Gray spoke with the film’s writer and director, Renée Webster, about its rapturous reception so far, the taboo discussion surrounding the film’s origins, and the safety on set of working with a predominantly female crew.

How to Please a Woman has played at a multitude of Australian film festivals in the lead up to its national release.  How has the reaction been so far?

We were programmed at the Perth International Arts Festival, and that has an audience of 1000 people per night, and that was really exciting because we sold all 7 nights almost 2 weeks in advance.  Then we had a couple of encore screenings towards the end of the program, and they both sold out as well.  It’s really exciting because when I wrote this film I always wanted it to reach as broad an audience as possible.  I’ve always been really audience focused when creating (my) work.

It’s quite funny, (at the festival) we weren’t the opening night, it was more the Gala event type-of night, so it meant I got to slink into the audience on the second night and lurk around the ladies toilets afterwards (laughs) and feel the film play to more standard movie goers, not the Gala film people.

You wrote and directed this film and, correct me if I’m wrong, but the production itself felt quite predominantly female.  Was that a specific effort to further champion the female-led story?

I think if it wasn’t a female-led story I’d still be trying to get more equal wading in the crew.  It works for us in many ways, but the reality is if you’re feeling an intimacy scene, for example, it’s always good not to have a room full of men around.  We have intimacy scenes, they aren’t explicit, but they still involve cast not wearing very much, but it was more the men (laughs), so I (filled) the room with women.  I had a female grip in the room.  The AD was a woman.  And I asked (the male cast) afterwards if it was worse or better to have that many women in the room, and they all said it was so much better.

Where did the story for the film originate?

There was something I found out about which was the springboard idea for the film.  It’s not a film based on true events, as such, but there was an Australian company I read about where these women ran a sexual service provided to heterosexual women.  The women who ran the company described themselves as housewives, and I was just really interested in how we have these preconceptions about the sex industry and who would be involved.  I read everything I possibly could about them, and then I got in touch with them.  What I wanted to find out about was why did they choose to offer that service and who were the clients.  Who were these women choosing to pay for this sexual experience? The assumption is that women can go and get a sexual experience if they want one, and I think that’s an interesting statement.  It’s a big deal if you make that choice, so I was super interested in finding out who they were and what their stories were.

The premise itself is one that lends itself to exaggerated situational comedy, but I appreciated the fact that there was so much heart and the commentary on women of any age owning their sexuality.  How was it in balancing the broad comedy with quite grounded thematics?

You know, I’ve never tried to be funny.  So when the film opened that first night I had the biggest shock of my life when the audience laughed.  To answer that question, I’m never really reaching for the comedy.  The best comedy comes from truth and a little bit of pain.  On set I would kind of call myself the “fun police”, because as soon as I thought someone was trying to be funny I’d kind of shut it right down.  It’s more of a comedy than what I expected.

I’m such a Sally Phillips fan! I think her work on the sitcom Miranda is stellar, and, of course, Bridget Jones and Veep.  How did her casting come about?

I wanted this film to be seen by as many people as possible.  It really felt like it had appeal.  Our whole approach was “how do we get this to audiences?”  And it wasn’t just how do we make it available to a broad audience, but how do we get them to watch it? Often, as we know, that means an international cast member.  For a first time film director it’s a big deal.  We thought we could either go for someone who’s more known as a dramatic actor and have fun with them, or go to a more comedic actor with the view of also telling a story that has a real, dramatic spine.

The reason I wanted to go to Sally was because she’s very relatable.  She’s really loveable.  She’s incredibly human, and she has this quality of being absolutely fearless.  You can see it in the work she’s done.  That’s what I wanted our lead to have in the way they played Gina.  Sally read (the script) and loved it, and had a real, profound connection to the material.  We had conversations where she conveyed her ideas, and one of the very first things she said to me was “Statistically, married heterosexual women have the least orgasms.”

We’re hearing much more about this “pleasure gap” and how heterosexual women are on the wrong side (of that).  I don’t know how she got this data, but also women’s life expectancy goes down and men’s goes up and housework has something to do with it.  These are huge generalisations, I know that, but they’re also statistically represented, and all I can say is that “I’m quoting Sally Phillips” (laughs). 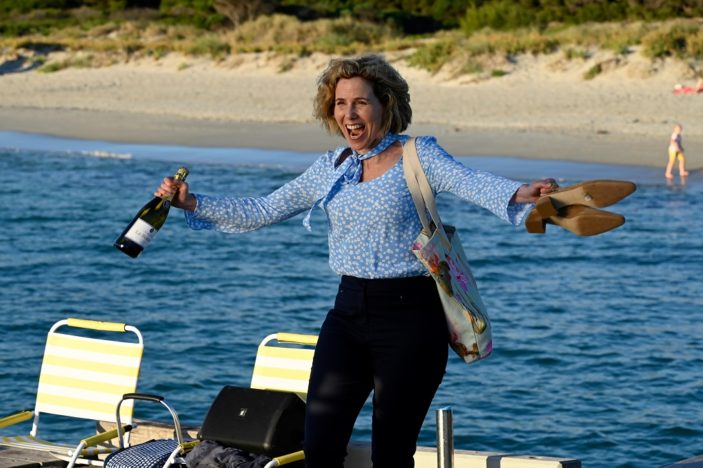 And the men in the film are just as important.  Was Erik Thomson always the character of Steve for you?

He just has that spectacular quality of being very human and (expressing) really gentle comedy.  That was something I was really interested in.  He had all the right ingredients.  It was terrific having him on board.

How was it working with Alexander England, Ryan Johnson, and Josh Thomson?

I’m so proud of the casting in this film, I really am.  I always knew I would love to bring Alexander England on board because, and again if you look at the roles he’s played, he brings this extraordinary relatability and humanity.  What I wanted to do in this movie was not make it female led to the point it excluded the men.  I wanted it so we cared about the male characters too.

It is really great to see a film like this take on that type of narrative, in that it respects men and doesn’t shame them for certain attributes.  It strips away the ego, really, and offers up the fact that there is a dialogue waiting to happen if they just allow it.

Oh, thank you for saying that.  I wanted to present sex as a conversation, a two-sided conversation.  I look at it as sex is an exchange of gifts between people.  That was the dynamic between all those little instances in the movie.

As a queer person there was actually quite a lot of character instances I could relate to.

Oh that’s great to hear, given that the film is predominantly heterosexual.  I was super conscious of that, that you can’t do all things at all times.  We wanted to open it just a little bit here, where people start to have those fantasies.  There’s so much the film doesn’t cover.

It was smart to have just that small little offshoot of the plot where a woman wants to explore her sexuality with another woman.  It was done in quite a natural way.  I think so many films like to stereotype what it is to be gay or bisexual, so it’s a testament to you that it was handled as naturally as it was.

That’s great! I thought about it a lot, in finding a comfortable place to get to that question point, so that if someone is wondering or questioning, they have that as part of the story.

One scene I really loved was when Josh’s character is stripping behind Cameron Daddo’s character, unbeknownst to him.  Scenes like that must’ve really added a lot of laughter to the set…

That was actually Josh Thomson’s very first scene.  We had been shooting for a while, on location at that house, so poor Josh rocks up on set not knowing any of us!  He didn’t know any of us, and it only takes a day or two to become friends, but, yeah, first day.  What he had been doing was sending me some videos of him trying out different variations (of that scene), so we had a good reference point.  Although it was the first thing he did, we were ready to land on something together.

The thing that really threw him though was that he wasn’t expecting Sally Phillips to be there.  She was getting ready for her next scene, and he’s such a Sally Phillips fan, and Sally being her fantastic self just let rip this huge, infectious laugh and got down on her knees and bowed down to him.  That really says a lot about what Sally brought to set too, she brings such a spirit.  It creates a really nice space for everyone to be able to have fun in and play.

How to Please a Woman is screening in Australian theatres from May 19th, 2022.