Interview: Director Lee Daniels on the cultural importance of The United States vs Billie Holiday

The first ever African-American film producer to solely produce an Oscar-winning film (when Halle Berry won her Best Actress statue for Monster’s Ball), Lee Daniels has long associated himself with acclaimed fare throughout his career thus far.

After a near-decade long break from directing films, the Academy Award-nominated director of such lauded features as Precious and The Paperboy has returned with The United States vs Billie Holiday, a winning snapshot look into the tragic life of legendary jazz singer Billie Holiday.

Talking with Peter Gray in conjunction with the film’s release (you can read our review here), Daniels discusses the importance of telling her story, why it spoke specifically to him, and the “magic” of Andra Day’s audition.

Congratulations on the film.  Billie Holiday is someone I knew very little about, and I liked going into this film with no preconceived notions as to what to expect from a Billie Holiday story.  Was there ever a challenge in deciding on where to place focus regarding her life story?

The script went through many iterations.  It started out as Johann Hari’s “Chasing the Scream”, and it was almost a three-hander when I came on board.  It was (focusing on) Harry Anslinger, Jimmy (Fletcher) and Billie (Holiday), and how all three of their worlds collided at once.  As I was trying to figure out the story to tell, to me the less complicated and more interesting story was the love affair (between Jimmy and Billie), and what defines a love affair with this complicated woman.  It’s not a biopic, more of the time that Billie started to sing “Strange Fruit” to her death, and to understand why she sang the song I did a flashback to her childhood that explains the woman that she is  It’s not a biopic, it’s a specific moment in time.

The United States vs. Billie Holiday is such a fitting title given the treatment she received.  With “Strange Fruit” being such a song of importance though, was there ever the discussion of titling the film after that song?

Many discussions, but I felt like that was too easy.  I really didn’t want the government to get off the hook.

I really feel like you are able to get the best out of your actors.  You allow them to embody such rawness and truth, and that’s for performers who are already so readily established.  How was it with Andra Day, someone who has never acted before?

It was just magic.  I’ve been asked that quite a bit, about how that happens, and I don’t even really have the answer.  I think that I don’t really know what I’m doing, and I don’t pretend to know what i’m doing.  I don’t come on set pretending I have the answer.  I know I have a vision but at the end of the day I’m just trying to find the truth in the moment.  And when the actors, including Andra, see that “this guy has no idea what he’s doing” they become very vulnerable.  They wonder what they have signed up for.  I yell “action” and I get it.  I know that sounds completely crazy, but that’s the secret to who I am.  I know what I’m doing but I don’t know what I’m doing…I don’t want to come in like I’m God.

Going back to “Strange Fruit”. Due to the significance of that song, was there a particular time during the shoot that you wanted that to be filmed? The beginning of the shoot to more towards the end?…

It was about halfway through.  The song took on so many different meanings.  When Andra first auditioned she sang the song, and she sang it beautifully, but it wasn’t what you saw (in the film).  And then before we shot anything, I had her in the studio recording another version of the song, and she was closer to understanding who Billie was, closer to being in the pocket of Billie.  So we had the audition where she’s singing “Strange Fruit”, which is great, we have the pre-record of her singing, which is really phenomenal, and closer to Billie’s voice…but after (shooting the) lynching scene we were in a completely different headspace, so we sang it live.  That drove the producers crazy. 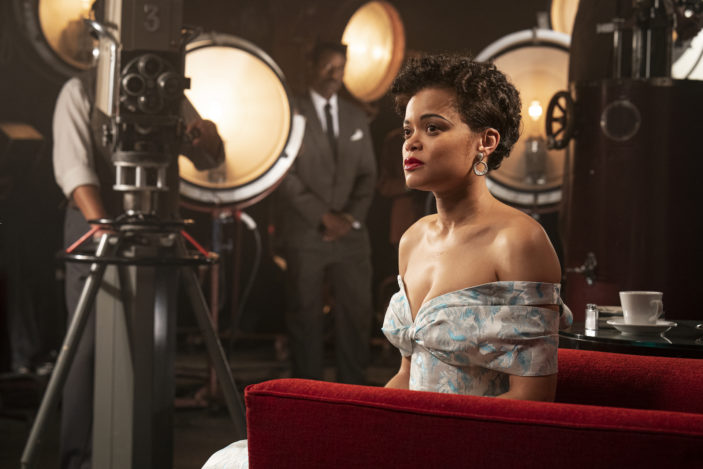 I really liked how you included black and white film footage, which seemed like real stock footage.  Was there any specific inspiration behind that?

I couldn’t afford to go outside and shoot in Harlem, and even if I could, Harlem don’t look like that anymore…I think it would look like a play.  For the most part we were held hostage in interiors.  I found footage that I felt would marry one scene to the next and make it work as a device with storytelling.

It’s been about 8 years since your last theatrical film (The Butler) and you’ve obviously kept busy on television with Empire and Star, but how did it feel to return to making movies?

So good, man.  So good that i’m not going to go away again.  I got really caught up in my TV world, and it’s a different form of expression for me.  It’s not like filmmaking, and I didn’t realise just how much I enjoyed it, so when the shows were off the air I was able to do my thing.  What I do know is I won’t be gone for another 10 years!

During that time I can imagine you were receiving scripts and offers.  What was it about Billie Holiday’s story that made this the project to come back for?

I just saw so much of myself in her.  Misunderstood.  I struggle with addiction.  I’m queer and black in America, in Hollywood, in entertainment, and so was she.  I just think it was her being so misunderstood by so many people.

I’m not sure if COVID had changed the intended release of this film in any way, but it really is coming out at such a topical time, especially with racial brutality still a rampant issue.  How has the conversation around the film been for you given its thematics?

It’s timely.  But it was timely when Billie sang this song.  It was timely then and it’s timely now.  And just based off the news it will be timely 30, 40, 50 years from now.  America isn’t changing unless we do the work, and I don’t know if people want to do the work.  This is real.  I don’t think people really understand the gravity as to what’s happening in America.  It’s going to take films like Billie to get people to look at the ugly and do the work to make it a better place.

The United States vs. Billie Holiday is screening in Australian theatres from April 22nd 2021.