As The Suicide Squad gear up to take on the big screen here in Australia, where cinemas are open, of course, (you can read our review here), director James Gunn and his cast, including Margot Robbie, Idris Elba, John Cena, Jai Courtney, Sylvester Stallone, Pete Davidson, Nathan Fillion and Joel Kinnaman, were on hand at a global press conference to discuss (loosely) making the film.

Our own Peter Gray was fortunate enough to be invited to attend the event where lame superheroes, Michael Rooker‘s status with the cast, and one of Cena’s appendages became talking points.  A not-always-suitable-for-work conversation begins…

James, when you knew everything you wanted to do with this movie, how hard was it to not just tell everyone your plans?

James Gunn: I always want to tell everyone everything.  I just have to hold on to these secrets.  I’ve been doing big movies (like this) for a while now, and holding on to secrets is a pain that I am used to.  You’re assuming that I didn’t tell anyone too, and I did, because I can’t keep my mouth shut.  I’m used to it, it’s a muscle I’ve exercised quite a bit.

You’ve been known to take obscure comic book characters and make them endearing fan favourites.  How exactly do you select the characters you choose to bring to life on screen?

Gunn: I knew the story I needed to tell, and there were some characters like Harley (Quinn) and (Captain) Boomerang that I knew I wanted in there, because I liked them and the actors that played them.  But then there were others like PolkaDot Man, because I really wanted to use a character that was thought of as a lame super villain.  I literally put into Google “Who is the dumbest super villain of all time?” and Polka-Dot Man always came up near the top.  Being able to take a character like that and give him heart was fun for me.  I love rats, so Ratcatcher was an easy one.  I wrote Bloodsport for Idris (Elba), I wanted to work with Idris, so it wasn’t so much who the character was but let’s find a character who’s obscure and we can build as our own cinematic creation.  Every character was different.

Idris Elba: The first conversation was about me playing Ratcatcher (laughs).  That was a really short conversation.

David, after hearing James say “What’s the lamest super villain?”, how was that conversation?

David Dastmalchian: He really first said he wanted me to be Superman but we had to go in a different direction.  The truth of the matter is, I was very embarrassed because when James told me he wanted me to be in his film… I, at first, freaked out because I couldn’t believe I was going to be in a James Gunn film, let alone The Suicide Squad, but then he said “Abner Krill” (and I had no idea).  “Polka-Dot Man?” I was so embarrassed because I spent my life collecting comic books and I had no freaking clue who Polka-Dot Man was.  James was like “Don’t worry, read the script and you’ll see”.  I read the script and couldn’t believe it.

Margot Robbie: That’s so weird.  When I first read the script, without having had a single conversation with James or anyone else, no one else had been announced or cast, I read Polka-Dot Man with Dave in my head.  I hadn’t met Dave until this movie either, and when I spoke to James and I asked who else was on board, he said “David Dastmalchian will be Polka-Dot Man” and that was exactly who I pictured.  I don’t know what that says about Dave, but I was so happy it was him.

Margot Robbie: It was meant to be.

We get to meet new characters in this movie, but there’s obviously returning players.  Margot, being that this is the third time you’re portraying Harley Quinn, what were some of the traits and emotions you were excited to play with this time around?

Margot Robbie: I loved playing Harley in the mindset of “single and ready to mingle”.  I haven’t played that version of Harley before, she’s always been heavily committed to Mr J. or fresh out of a break-up, and James put in a lot of funny potential love interests throughout the film.  Doesn’t always end well, obviously, but that was kinda fun.  Also to play a Harley that was in mission mode.  Anytime she’s in a new group there’s always something fun and new to do, because she reacts in a way that’s based on who her new teammates are.  I was just looking forward to the group ensemble and what the vibe was going to be, and what that would bring out in Harley.

Juan Diego, do you want to talk about that romance?

Juan Diego Botto: It’s not all about John Cena’s stuff (laughs). The character that I play, Silvio Luna, he’s a new ruler and he’s obsessed with his rainbow lorikeets and Harley Quinn.  Those two obsessions will determine his fate…eventually.  Fair enough?

Margot Robbie: I think one of the hardest things we did on this film was not the big stunt pieces, it was resetting the make-up between our characters. When Harley kisses someone, it’s a mess afterwards. 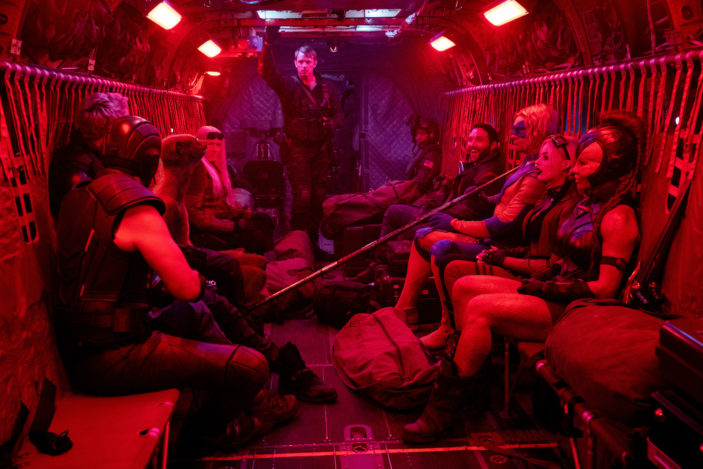 In the subject of teammates and dynamic, the competition between Peacemaker and Bloodsport is one of the funniest aspects in the movie.  How was it for you, John and Idris, to work on this dynamic between your characters?

Idris Elba: First of all, can I say, Hey Sly (Sylvester Stallone), I love you bro, i’m a big fan.

Sylvester Stallone: Oh, likewise.  A very sophisticated acting group here, except for Mike (Michael Rooker).  Michael, I should have dropped you off that cliff years ago.  Other than that, it’s great.

Idris Elba: It was a really great experience to explore, if I’m being honest.  When you read the script you see the natural rivalry between John (Cena) and I.  We gravitated towards this dick-swinging competition that was just a lot of fun.  James really egged us on to make Peacemaker and Bloodsport pop on screen.  I loved every minute of it.

John Cena: I’ll say the same.  I think if you look at the personalities we have here, James has cast a very wide net.  On top of that you have everyone’s superhero personalities that are distinctly definable, except for Bloodsport and Peacemaker.  They’re of the same skillset, and I think that really starts the fuel for the one-upmanship and the battle for that alpha position.  The other superheroes don’t need to compete as much because they have definable characteristics, and I think that small journey (between Bloodsport and Peacemaker) really does make for some great comedic moments.

Pete Davidson: Yo, your dick is huge!

James Gunn: John did ask for a huge penis filter to be used on the camera at all times.

John Cena: In such a panel with a cast of talented actors and creators, we just spent half a minute talking about my dick.

Taking us into a different direction, Daniela, not much is known about the character of Ratcatcher 2 from the roster.  How did you develop the character, and as a Portuguese actress in her first American movie, how was it to work with such an incredible cast?

Daniela Melchior: I just had to pretend like I wasn’t a fan of theirs.  I was really happy I had this freedom (given to me) by James.  I didn’t have to stick to an already existing character.  It was interesting to work on this super-villain as someone who has just started, who doesn’t know how to fight.  I felt really lucky to be with so many good people.

Joel, how were you able to get Rick to stand out amongst so many high-concept characters and performances?

Joel Kinnaman: We had a good script.  I was just so happy to be able to do this new version of Flag that James wrote, I got to spread some comedic wings… it was the second time for me to do this but I felt like I was doing this for the first time.  Me and James had some conversations early on and we decided I wasn’t going to be bound by what we did in the first film and just let this be a new experience.

What was the funniest scene to film, and did anyone have a fit of laughter whilst shooting?

Flula Borg: I’m the man that suffers from amnesia as soon as someone yells cut.  It’s like someone takes a 2×4 and hits me directly in the face. I have no memory of anything that happened apart from the cupcake breaks, which I took in between each scene, so thank you, again, for the lemon poppyseed.

Nathan Fillion: I’m going to say it was your rant on the helicopter.  Anybody tell me if I’m wrong?

James Gunn: Margot, Jai, Rooker, Pete…they had a conversation basically about Flula imagining Harley’s shit.  That was 3 hours of filming because we just couldn’t stop laughing, and zero percent of it made it in the movie!

Joel Kinnaman: James was even saying “None of this is going in the movie.”

Margot Robbie: We couldn’t use any of the footage anyways cause I would just burst out laughing.  It was so ridiculous and it went for so long…

Michael Rooker: The movie would be rated X (if they used it).

Jai Courtney: Watching Rooker struggle to swim was a lot of fun for me.  We spent a bit of time submerged in water.  You had to stuff your costume with floatation devices, so seeing which parts of us would rise to the surface first was very stupid, but very fun.

Knowing that none of that footage would be used, but you kept on time in filming, how do you, as a director, do that?

James Gunn: That was honestly a day that we were okay on.  One of the tragedies of these type of junkets is that there are so many people involved in the movie that can’t be a part of this.  They give their lives to movies like this for a year, two years… our production designer, our AD.  They’re the reason the film is on time every day. Lars (P. Winter, co-producer), we worked together in a way that helps keep me under control. He understands the creative part of filmmaking.  I think we just scheduled the movie very well.  On days like that, I say we goofed around for 3 hours, it was probably like 45 minutes, but that’s part of making a movie.

The Suicide Squad is screening in Australian theatres (where accessible) from August 5th, 2021.