After In The Heights creator Lin-Manuel Miranda enlisted director Jon M. Chu to bring his acclaimed stage production to life on the big screen, Chu extended his arm to longtime collaborator Christopher Scott, the three-time Emmy nominated choreographer who helped shape the movements of the Step Up films.

Ahead of the film’s Australian release, Peter Gray zoomed with Scott to discuss the gruelling rehearsal process, how important it was to maintain a connection with the music, and which sequence he’s most proud of.

I will say, first off, thank you for choreographing the Step Up movies.  They were quite formative for me in my early 20’s, so thank you for the confidence on the dance floor.

I’m so glad you said that.  I love to dance, and I love that it did that for you.  Keep it going.

Before you start choreographing a dance routine, what do you need to determine for yourself?

I think I just need to understand the moment and the overall vision.  I found with this movie (In The Heights) one thing that was really helpful was having these conversations with the actors who were performing the numbers, because they were doing all of this work as an actor and it was so vital as a choreographer to hear them.  Ultimately, they have to perform these numbers, so it’s good to hear their take on it.  It was really helpful for every number in this movie, particularly “Paciencia Y Fe” by Olga (Merediz) because she’s been working on this number since Broadway…so hearing her connection to that song was everything.  That’s how we were able to get to a place that serves her as a character.

Had you seen the Broadway production prior?

I did.  I had seen it in London, with the London cast, which I’m sure is a bit different  than on Broadway.  But it was that soundtrack for me.  I have probably listened to that original Broadway soundtrack a thousand times.  What a blessing to have that tool, to be doing a musical with the original (creator).  I got to spend a year with it, it was pretty intense.

You obviously have a great working relationship with director Jon M. Chu.  Was that how you heard about In The Heights? Did he reach out to you personally?

He asked me pretty early on.  At this point we’ve done so much together.  He really created a path for me as a choreographer.  He gave me my first opportunity, him and Jamal Sims, who was the choreographer on all the Step Up movies, 1 through 5.  For this movie it felt like that moment of “How does she dance?” and “How do we be creative?”… it really felt like that moment of all that hard work led us up to this point.  It felt less like “Do you want the job?” and more like “Here we go!”

Is there a different approach to choreographing a musical like In The Heights to something like Step Up?

Oh absolutely.  Step Up is based in the dance world.  You have that element where people breakout into a dance battle, and it’s real.  It may not always come across so real in the movies because they’re fantasised, but when you go to a battle you see this culture exists.  For the musical movie, I think the biggest challenge is not jolting people out of the movie.  When people start to sing and dance it can take you out of that moment.  A lot of people disconnect from musicals.  I love it when people just burst into song, but when your goal is to create something grounded…our biggest thing was how do we not make it seem laughable.

That’s why that reflection shot in the opening is so important.  We had to bring people into it.  We wanted to find a way to ease people into it so you can see what (Anthony Ramos) is thinking, so when he opens those doors you’re with us and we can go full-blown dance. 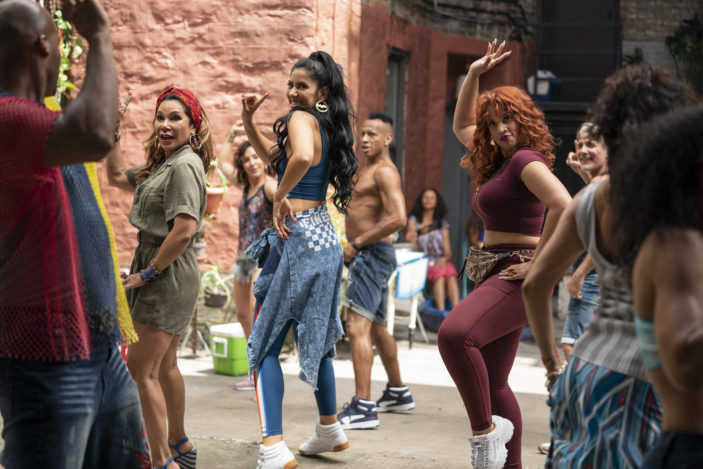 If a performer is struggling with a routine, how do you proceed with that?

With a lot of care, to be honest.  These performers have so much pressure on them.  As a choreographer I feel a tonne of pressure myself, but I have that desire to push people because this cast is so talented, it’s crazy! They could have done this live.  We could have done this Birdman style, they were that good.  I didn’t want to dumb anything down to make their job easier.  I knew they wanted to be pushed.

One of the things that stands out for me is that club scene with Melissa Barrera (doing) that choreography with Eddie Torres Jr, whose dad is literally responsible for Mambo On 2 (timing) in New York…so we had like royalty working on choreography with us.  He didn’t hold back on training Melissa on mambo, and it was hard for the dancers, they were stressed…but I had her back and I promised her I won’t let her look stupid.  If we had to change it, we’d change it on set, but I wanted that rehearsal process to at least try.  She pulled it out! We were screaming at the monitors for her. It was crazy!  I’m so proud of that woman, she’s a star!

How long is the rehearsal process? Before filming how long are you actually practicing for?

Never long enough.  We had two months of straight rehearsals.  Eight weeks of dance rehearsals, and then maybe two extra weeks with the actors.  Then I had three weeks of skeleton crew before I even got to New York to workshop.  But we were rehearsing all through shooting.  When we got to that wall (for “When The Sun Goes Down”) on the soundstage we were shooting that in between takes of Anthony (Ramos) and Gregory (Diaz IV) for the opening number.

Is there one particular dance sequence that you’re most proud of?

Oh man, that is a hard one.  Honestly, i’m super proud of all of them.  There’s one number that stands out to me, as far as an experience that I had, and that was “Carnaval Del Barrio”.  That took one day to shoot.  The energy in that courtyard was unforgettable.  Before this movie, if I was asked what my favourite moment was I would say “dancing in the rain in Step Up 2: The Streets“.  It was my birthday, it was my home town…it was everything.  I gotta say the day has come that another moment has overtaken that spot, and that’s “Carnaval”.  People were crying, no one would leave set…we wrapped after 14 hours and the dancers just stayed on set chanting “New York, New York”…it was an unbelievable moment and a feeling that has energised me ever since.

In The Heights is screening in Australian theatres from June 24th 2021.