From August 26th, director Nia DaCosta and producer Jordan Peele dare a new generation of viewers to say one particular name; Candyman.  Ahead of the film’s release, our own Peter Gray was invited to join a roundtable panel with writer/director DaCosta and star Colman Domingo to discuss the important social commentary on racial trauma present among the horror of their new envisioning of the genre classic.

Nia, did you feel any pressure in taking such an iconic property as Candyman given that this is more a spiritual sequel? And did you visit the original when prepping?

Definitely revisited it, because I love it, and I did it with friends because I thought it was interesting to see how people would react to it now.  I think it’s a very different film than what we remember.  It’s a very strange, idiosyncratic film, and it’s very special in that regard.  In terms of pressure I didn’t think about it.  I just thought “Oh cool I get to make a movie with Jordan Peele” and then, of course, there’s the studio and the canon of Jordan Peele and the fact that on the internet people really care about his character…I forgot about that.  But you have to just push it out and do what you can from your point of view.

How was the collaborative process with Jordan Peele?

I had heard that he wanted to do a Candyman movie from my agent, and I’m a huge fan of his and of the original Candyman.  I just wanted to be involved and, thankfully, after my original pitch and realising that we were aligned with the story, everything worked out so great.  I had Ian (Cooper, producer), who had worked with Jordan before on Us, by my side every step of the way.  He was such a creative force.  Jordan was wonderful.  He was a resource to me and I just learned so much from watching him work.

There’s a lot of elements to the film with its social commentary and the many subgenres of horror.  What was the key element in cracking this story and building from that?

The shadow puppetry effect used in the film is such a haunting way to showcase a storytelling method.  What inspired you to use that creative form of storytelling as opposed to a more traditional flashback sequence?

Jordan and I spoke early on about how much we would hate to do a traditional flashback scene (laughs) or to use footage from the original film, cause we wanted this to stand on its own.  He mentioned shadow puppetry, and then in Chicago we developed with this amazing theatre production company and from there it became less about flashbacks and more about how we depict these stories, these legends. 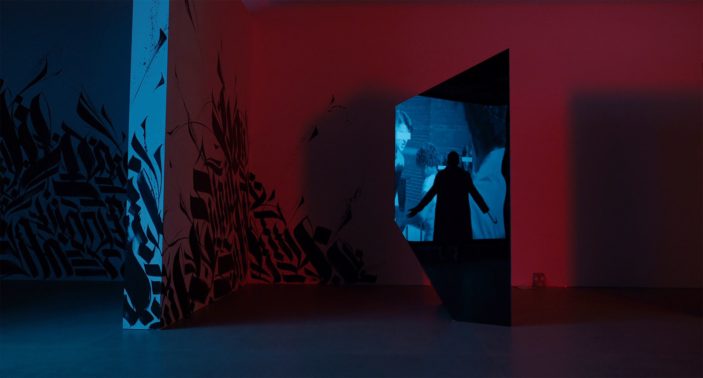 With Candyman the character, do you view him as a monster and what do you think he represents?

I think Candyman is definitely a monster, for sure.  But I think in some ways he can be an anti-hero.  To me he represents how we can change people into idols or martyrs or representations of something as opposed to living, breathing human beings.  He’s a villain of a sort, but we wanted to deconstruct who decided he was a monster and who gave him that name.

Going from that, the violent content in the film was surprisingly not as graphic as I was expecting.  It was more unnerving in how it was suggestive rather than gratuitous.  Was it a deliberate choice to subvert the gore?

It was a balancing act, for sure.  I love gore, but I think it has to have its place.   Most of the gore and body horror happens to characters we care about, as opposed to the more throwaway, slasher stuff.  But we also wanted those slasher moments to be visceral and for you to feel them, but that doesn’t mean you need to see a close up of someone being disembowelled.  We thought about it a lot.

The casting is amazing here.  Did you have any specific actors in mind?  How was that casting process?

When I pitched the movie I had in my deck that Teyonah Parris should play Brianna, and that’s that, and in the meeting (the studio) was like “Oh, we love her”, so it was great to have that support already.  Yahya and Jordan had worked together already, so that’s how he came onto my radar.  Colman Domingo, we all love, and Nathan Stewart-Jarrett…reading the new drafts I just knew who everyone (was).  Thankfully they all said yes.

Talking about the character of Brianna specifically, have your experiences as a black woman influenced how you wrote her and her perspective on the story?

I think something that people talk a lot about in the black community is how black women hold it up and how a lot of the trauma that happens isn’t able to be processed.  They aren’t able to work through their trauma because they are too busy dealing with everyone else’s.  That’s what I wanted to talk about with Brianna, that, yes her partner is having a hard time, but she has her own trauma that she’s never really dealt with, and the closer that this legend of Candyman gets, the closer it keeps coming up (for her). 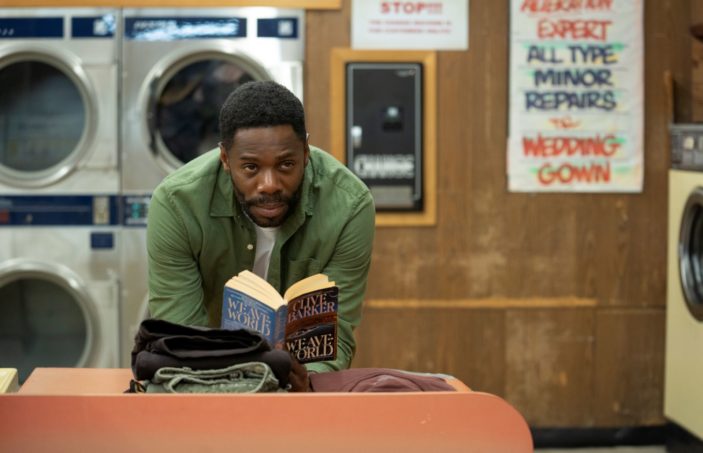 Colman, prior to taking on this role, what was your experience with the Candyman mythos?

I knew of the urban myth of Candyman, and then I made sure I stayed away from it for many years (laughs).  I’m not someone who ever really gravitated towards the horror genre.  But once I had the blessing of Jordan Peele writing this role for me I knew I needed to deep dive on the myth of Candyman.  I watched the (original) film and I thought it was incredible and I understood why it stood the test of time.  And why the themes were very relevant and provocative and profound.  Then the way it is explored in our film, it’s elevated and taken up a few notches.  It deals with things that are on our minds right now, especially with this year of racial reckoning in America and around the world.  The ideology of who we are as black people with art, with criticism, with gentrification…I think it’s unpacking a lot of those things that we are dealing with.

Why did you want to stay away for so long?

Your character is quite key to the narrative.  How did you prepare for the role?

There were a few ways I prepared.  One was taking the source material, the other was what was on the page, which was this psychological examination of trauma and mental illness. I wanted to make sure he was an ordinary man who no one really looks at.  I’m sure there’s probably lore in mythology put on him because of his trauma in the community.  I don’t know if he’s someone that has a lot of friends or colleagues, but he’s someone people know exist.  I’m a black man in America so I didn’t really have to go too far to do my work, but it really is examining the history of trauma towards black bodies, especially black men in America.  You take in all of that and then take in the character’s purpose.  I wanted to find ways to love this character and find compassion for him as well. 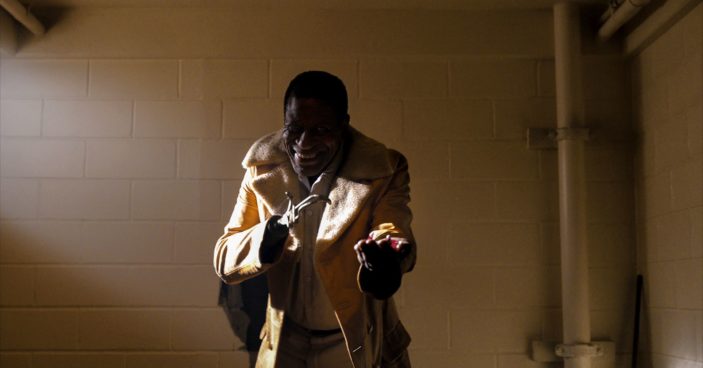 Connected to that, there’s such an open and raw humanity on display.  What tools from your stage and screen experience were the main go-to’s in conveying his crooked but justifiable point-of-view to the audience?

I come from the theatre.  I have been an actor for 31 years and I rely on my skills from the theatre about building a full character.  I make decisions about everything, and hopefully those decisions will mean everything else fades away and I just become the person.  Whether it’s the way I pitch my voice or the way he walks or talks, or how he eats or how he sleeps.  I make every decision so you don’t have to see the work.  That’s what I think is required so you could see (my character’s) beating heart.  I’m very conscious of the type of men I want to create in cinema and the impact that can have.  He can be a terrible character, like the one I played in Zola, but I want to make sure they aren’t suffering tropes.

The film, first and foremost, is designed to engage its audience, but what would be the biggest takeaway you want people to leave with?

I want people to be thoroughly entertained, thoroughly freaked out, and also thoroughly inquisitive to have a deeper interrogation over the themes of this film.  I think it’s setting us up to do the work that we have laid out for many years to examine culture and violence on brown and black bodies.  I love the themes of criticism and where our work comes from and how do you elevate the trauma and put it into an art form.  It’s unpacking a lot and I truly hope there are many conversations being had, that you take it with you.

Back to the mythos around Candyman, there’s often stories tied to the making of horror films.  Was there anything that happened on this set, and do you believe less or more in horror legends after making this film?

That’s a great question. I think, because we were shooting in the Cabrini-Green projects, where this took place…and I’m just one of those actors that’s very feeling and I think cause I am an open vessel I will invite in that spirit to help me tell the story.  I know I put out that invitation.  It was alive, especially around Cabrini-Green, because these towers were about to be torn down and then a Target or a Starbucks was going to be built on top.  These are people and they have lives and I think we need to invite them in and tell their stories so we don’t forget.  I don’t have any tremendously wild stories, but I can tell you for sure that our production team was so good that when I walked into the building, towards the end of the film, that it felt like terror.  I was terrified, but it was the space my character lived in.  It’s a lot of things you have to take in as a performer.  A lot of it may be toxic, but it’s all part of the greater examination for good.

Going off the terror, did you enjoy making the bloody scenes?

Yeah, of course I did! Are you kidding? I had to get my head moulded cause I was getting my eye taken out, so that was fun (laughs).  Anything with these special effects you think “How are they going to achieve that?” and it takes so much coordination, and I love that choreography.

Candyman is screening in Australian theatres from August 26th, 2021