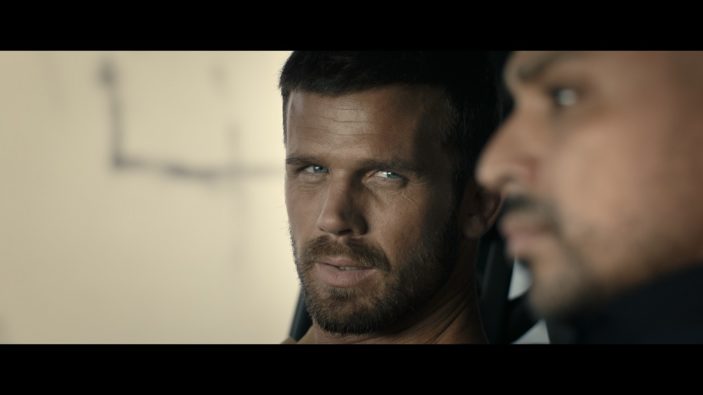 If you’re of the MTV generation then it’s safe to say you grew up with Cam Gigandet; and maybe you didn’t even know it.  A steady staple in the entertainment field heavy on catering to the teens and tweens of the 2010’s, Gigandet made a name for himself across the likes of such phenomenon as The O.C. and Twilight.

After displaying his ease with light fare as Easy A and Burlesque, Gigandet has transitioned into gruffer, more action-centric roles, ranging from The Magnificent Seven, Without Remorse and, now, Black Warrant.  Reuniting him with director Tibor Takács, Black Warrant tells of a semi-retired special ops assassin and a DEA agent crossing paths on separate missions to stop a cyber terrorist organization that has built a dangerous machine threatening to attack the power grid and bring catastrophe to the world.

Ahead of the film’s release, Peter Gray spoke with Cam about finding his space within the action genre, if having kids will change his career choices, and how it felt to be sort of, almost waterboarded on-screen.

Before I get to Black Warrant, I have to say how hilarious you are in Violent Night.  You sliding across the couch and yelling “Parkour” is one of the funniest gags I have seen this year!

(Laughs) Thank you! Nobody gets it.  Even my parents, and they’ve seen it twice now, and they laugh at everything.  But I was talking to my mom yesterday and she was like “I’m not sure I know what parkour is…”

Obviously you’re capable in the action genre, but seeing you in Violent Night, as well as films like Bad Johnson and Easy A, comedy is something you execute well.  Do you enjoy it? Do you find it comfortable?

I do.  I love it, and I don’t know why I haven’t done more.  I would love to do more.  Things can get intense on action sets, but comedies usually are just good fun and lots of laughs.  I feel like I’ve done so many random things where I really want to have a good time while I’m on set.  Violent Night was a really fun one.

Within the action space, are you still having to audition? Or was Black Warrant something you were offered?

That one was an offer.  I had worked with the director (Tibor Takács) before, and even the executive producer, so, you know, we had that relationship.  That was kind of an easy melding of our group.  I’ve done a lot of action stuff (now).  Hopefully they can just see me with a gun (laughs) and I don’t have to audition with a pretend gun anymore.

Yeah, of course.  That’s always great.  I was just thinking about how, in the beginning….I have three kids now, and having kids really changes the year.  I don’t know if it’s your priorities or your perspective on your career, but I just want to enjoy what I do.  But I also have to support my kids, as opposed to what I was like before I had kids, where I could just do what I wanted to do.  It was all about me.  But now I’m more open and less strict about my career.  I just want to have a good time doing what I love to do, so there a lot of open doors, and I’m just rolling with it.

Are we going to see Cam Gigandet: Family film star?

You know, I would love to.  I took my daughter to the premiere of Violent Night, my 13-year-old-daughter, and I have a 10-year-old and a 7-year-old (too), and I would love to do a movie where they could actually sit and watch with me.  Even watching Violent Night I was thinking “Oh, I don’t know (about this).  Maybe in a couple of years you can see it, but not right now.”  I’m not even sure they’d be able to see Black Warrant.  They’re okay with violence and action, but, you know, I don’t know about them seeing dad doing it.  I want them to see dad in a really good positive way.

Having worked with Tibor Takács before, how has that relationship grown over each project?

The more you know anybody, the more comfortable you’re going to be.  Definitely on set there’s a shorthand in communication where we just kind of get on the same page.  It doesn’t need to be these long, drawn out, trying to see what each other’s vision is…we’re already there.  We understand how each other communications, and how we collaborate with each other just makes everything that much easier.  It gives you more time to play around with other parts of the character. 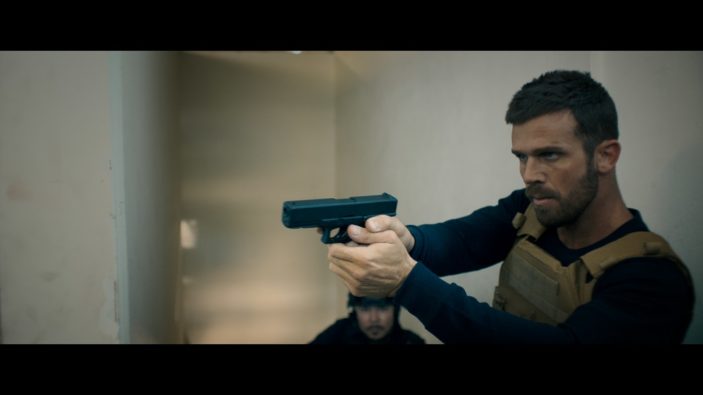 With the physicality that comes with these roles, is there a certain movement to each character you play?

Yeah, I think there’s a different physicality to military guys versus DEA agents.  I don’t actually know how to shoot a gun or do any of that stuff, but I’ve practiced enough to where I can (laughs) and I am comfortable with those different styles and techniques.  You learn so much from the advisors on sets.  And different sets in different countries means there’s always a different style.  Every time I learn something new about guns and gun safety.  It’s a fun perk of the job.

There’s a scene in Black Warrant where your character is essentially waterboarded.  Obviously it’s all very controlled, but do you read something like that in the script and worry about what this genre requires you to do?

Weirdly not.  This one I was sort of intrigued about the whole idea of waterboarding.  I wanted to not necessarily experience it, but sort of experience it (laughs).  And I was interested in the idea of how they were going to do this without actually waterboarding me.  I had offered from the get-go, I was like “Hey, if you guys need to waterboard me, let’s do it!”  They were not on board with that (laughs).  Then it became interesting to see how they were actually going to make it feel like I was.  They came up with this idea of putting earplugs in my nose.  But that in itself was some sort of torture, because I can’t breathe out of my nose but I still have water over my nose and mouth…I’m not sure how much it helped (laughs).  I still don’t think I can technically say I’ve been waterboarded.

I think out of the two of us you’ve been more waterboarded than I have.

And you’re going toe to toe with someone as legendary as Tom Berenger here.  How was it working with him?

I mean, I watched Major League about 1000 times.  I don’t know what I was really expecting, but he was so funny and so charming.  You’re just like charmed instantly.  He would just start getting into these laughing fits (and) you just can’t stop laughing.  It’s definitely a memorable moment, because I’m thinking “It’s fucking Tom Berenger right there, laughing uncontrollably, and I can’t stop laughing (either)”

Has there been anyone you worked with that intimidated you?

Denzel Washington was probably….we had a scene together in Magnificent Seven.  He was intense.  You definitely know he’s bringing it.  That was a wild experience for sure.  That was probably the most intimidated I have felt.  Don’t tell him I said that (laughs).

Black Warrant is screening in select theatres, digital and On Demand in the United States from December 9th, 2022.  It will be available to rent and/or buy on DVD in Australia from January 18th, 2023.