In addition to talking about that opening scene and how it was to broach the subject with his leading stars, the two discussed how it was filming during the pandemic, if there was anything he would change about his story, and why it was necessary for his narrative to embrace bad behaviour.

I like to go into films not knowing anything about what’s going to happen, and when this film started I was very much thinking “What exactly am I about to see”.  That opening is obviously not indicative of what the rest of the film will be, but did you have any reservations about showing that sequence in such a graphic fashion?  Did you ever think about keeping it more suggestive?

Oh yes, very much.  Originally, it was not supposed to be seen at all.  But then I had conversations about how it would be frustrating for the viewer (to not see it) and it would seem as if we weren’t able to make it.  So I thought we’d show it towards the end of the film (in the classroom sequence), but the whole film is about analysing this tape, and in order to successfully do that I think the audience needs to have (the tape) in their mind the whole time.  It was also so the audience can be in the same position as the parents, those that watch it and have an opinion about it, have a judgement about it.

The film was made during the pandemic.  We’re really yet to see many films properly address it, but you had your characters in masks throughout.  Was it something you had to alter your script for? I’m assuming this was written prior to the pandemic?

It was conceived before COVID.  I’ve really only made films that dealt with historical aspects, so I desperately wanted to make a contemporary film.  So when the pandemic hit I just thought it’s another element.  I knew I wanted to make the film now and I didn’t want to wait for better conditions, so we just did it.  The question became what are the signs of COVID? The masks, the social distancing, the protocols… we just put them in the film as part of the story.  Of course it was a risky thing to have the actors all masked, but in the end I think it became a metaphor for certain aspects of the story.

(Laughs) yeah, exactly.  It was kind of serendipitous, that scene.  It fit very well (within the context) of the film.  I didn’t understand what she said at first (laughs).  It wasn’t until I was watching the film back that I did.  I actually forgot about that (laughs). 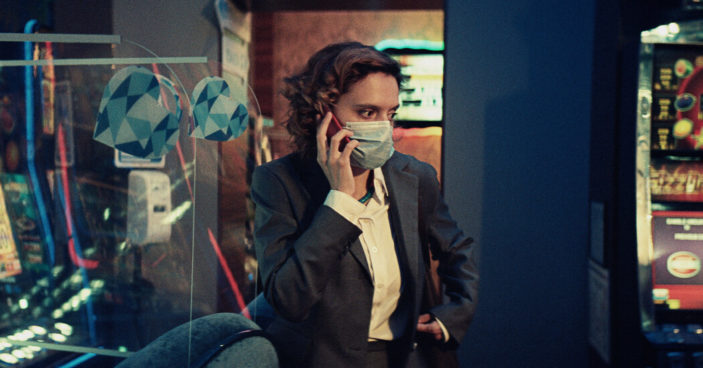 It just adds that extra element to a film that really takes you on a journey, especially when you look at the ending and its multiple strands.  Did you have a particular ending in mind? Or was it always the plan to show these different scenarios?

The structure of the film changed a lot over time.  It was originally going to be quite a straightforward, traditional film.  Then, little by little, I saw it was too closed, too well behaved… I wanted it to be a little more wild.  I wanted it to feel like an unfinished product.  The original ending (I created) is actually not even in the film.  She (Emi, the character) was told she had to resign and she said she had prepared her letter of resignation and only came to the meeting to tell each person what she thought of them.  I didn’t really like it that much.  I struggled with coming up with a new ending.

Was it difficult broaching the subject of realism to your actors regarding that opening sequence?

The way this film is structured is very interesting.  You have such a confronting opening and then an unexpected ending, and everything in between is quite grounded in realism as we follow Emi throughout her day, trying to sense where the other characters are in terms of their headspace.  Did you ever think of changing the way narrative was going to play out?

The script went through a lot of different structures, and what you see on screen now was only really put together a few months before shooting.  If there was anything that I would do differently I wouldn’t show the tape or even talk about what’s happened.  I would just show her going about her day and let the audience figure out what’s going on.  But I also think that’s not a great idea (laughs).  The rest of the film was always the same.  It was always going to be a little bit messy.