With Australian cinema exceeding expectations at the box office in 2021 alone, now feels like as a perfect a time than ever for homegrown productions to thrive within their own country.  Founding his own company to pursue his passion of filmmaking, Dublin-born Antaine Furlong had followed his dream to technical fruition as his debut feature Ascendant prepares to launch across Australian screens.

Ahead of its April 8th release, Peter Gray chatted with the director about the origins of the film’s complex story and his hands-on approach to filmmaking.

I’m terrified of heights myself, so it’s nice to be able to tap into your own fears and have a crack at it.  Even going into a high-rise building is enough for me.  When I came out of a meeting in Sydney there was this maintenance guy fixing the elevator, which just elevated my sense of fear.  You can see the floor rising but the doors are open…just darkness and wind blowing through it.  It was fascinating to think of the power this guy has in his hands.

Where did the idea for Ascendant originate from? It certainly went on narrative journeys I wasn’t expecting.

The initial idea came from what I just mentioned.  Just seeing someone have so much power over a travelling system that millions of people around the world use daily.  That’s what fascinated me, cause there really wasn’t anything out there (like this) when I wrote it, which was about 12 years ago.  As time passed and we were getting closer to turning it into a feature film, I just didn’t want to do some run-of-the-mill “one person trapped inside of an elevator” concept that I felt had been done before.  I wanted more context, I wanted more character, I wanted to go further.

This is the start of a trilogy that me and Kieron (Holland, co-writer) have been working on, and we can only hope we get to make it as a trilogy, but that was the point that we had this character (Aria Wolf) and she meant a lot to us.  We didn’t want to make it overly complicated but not spoon-feeding a very simple narrative, and that’s what we hoped we achieved.  But when you’re making quite a contained thriller like this it’s quite complicated to jump out of the story…you’re always worried you’re going to break the audience’s attention.

How much of the film was done during COVID? The singular setting and separated actors felt like a clever way to work around that or was that just coincidence?

COVID hit us just as we had wrapped the first cut in December (2019).  I went on holidays with my family, and when we came back to kick into post-production, which was all the visual effects and the sound, COVID hit and that was a shock to the system, as you can imagine.  That’s when we had to reorganise how we were going to achieve this second half of the film, which was getting it to make sense.

The special effects are incredible too, I understand you were quite hands on in that aspect?

I’m a first-time director, so the first part of it was an absolute need (for me) to know how everything works.  There’s always a fascination element to it.  You’re sitting around teams of people who’ve worked on huge movies.  It’s almost like alien technology.  I look at these guys as aliens, and I mean that in a beautiful way, because the things that they can create and animate is fascinating.  The second part was the camera movements, how I’d like the camera to portray certain shots, and then talking about the creative aspects, especially with the elevator. 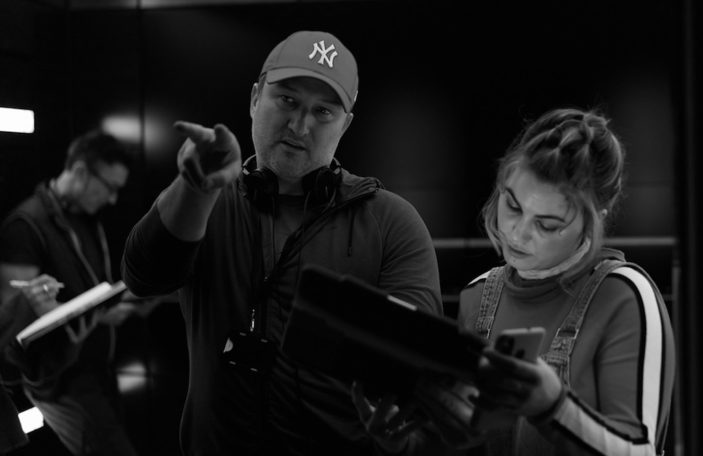 You have such a great lead in Charlotte Best, how did she come about for you?

When I hooked up with James and Kristy Vernon, the producers of the film, the big thing for me was that we got a team of people that could work really well together. A family unit more than just picking who’s available.  They did an amazing job getting everyone together.  The same thing happened with the casting process.  We went through about a hundred (actors) for this.  We looked at the US, Europe, Australia and New Zealand.  It went from 100 down to 50, and then we auditioned 50, and it went down to 5.  I met some of the 5 that they thought were right for the role, and then it came to meeting Charlotte.  We were really lucky she was available cause she was travelling at the time.  I met with her and discussed the level of stress she would go through with a role such as this.  I likened it to Ryan Reynolds in Buried…being in that anxious state for a heightened period of time. It was 20 days of heightened stress, but there’d also be some stunts…and Charlotte just went at it every day.

Week one we filmed all of the screen stuff.  All the stuff with Jonny (Pasvolsky) and Alex (Menglet)…was all done in the first week and then for Charlotte it was all playback.  We had a little ear-piece for her so she could hear all the dialogue coming through, which is really difficult, I don’t know how the actors do it.  She’s got the sound coming through, she’s got to get into the moment, she’s stuck in a box, crew all around…and then time to get anxious! I gotta say I have the utmost respect for the craft, they’re just incredible.

I also have to ask, I was so sure that one of the characters was played by George Burgess and then I saw his name in the credits, how did he come to be involved?

We were looking for some decent looking, Russian-looking guys and I didn’t want to do the stereotype Russian “look”.  Some of them dress quite nicely, it’s not just all bomber jackets, and I knew that some of the (Burgess) brothers were looking at doing some acting.  I didn’t know him at the time but, not only does he make me look like a 10-year-old when I’m standing beside him (laughs), but he’s an awesome guy.  He’s such a lovely, down-to-Earth person.  It’s such a different universe from watching them play rugby to meeting them on set.  We actually had so much fun playing those violent scenes in the film…I can never take them seriously cause I just remember what happens on either side of filming.

As you said that this is the start of a planned trilogy.  Was that always the intention from when you started writing?

It did grow organically as the original script outline was literally the girl trapped in an elevator, and I hated it, I knew I could do better than this.  So Kieron and I put our heads together and we got quite interested in who this person was and who she was going to be, and it just evolved from that.  We knew we weren’t going to have the time in one film, so that’s why we started laying the seeds of who’s alive and who’s dead, and is it the past or is it the future…we played around with it so that way if we get the chance to make a second story we can really expand.

Ascendant is screening in Australian theatres from April 8th 2021.