Interview: Annie Mumolo on Confess, Fletch, choreographing comedy and if she’d ever write her own classic remake 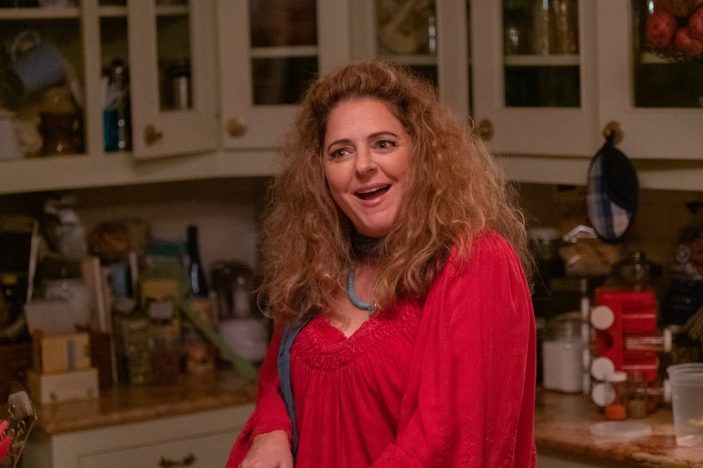 If you’re one of the many that have laughed on repeated viewings of Bridesmaids (and hopefully the underrated Barb and Star Go to Vista Del Mar) then it’s because of Annie Mumolo.  A writer and actress who has long been a reliable staple in the comedy genre, she’s once again making her presence undeniably known opposite Jon Hamm in the long-coming sequel, Confess, Fletch, a continuation of the hit Chevy Chase-led detective films of the 1980’s.

As the film releases in North American cinemas and On Digital and Demand this week (read our review here), Peter Gray spoke with Annie about her firecracker role in the film, how deceptively difficult it was to choreograph her main sequence, and if she would ever approach writing her own take on a classic 80’s comedy property.

Thank you for taking the time out today.  I don’t know what I was expecting from a Fletch film so far down the line now, but this was really, really funny!

Oh my gosh, I’m so happy to hear you say that.  Even having been in it, you don’t know what to expect. I was very excited once I saw the final version.

Given that you are this very established comedy writer, do you find when taking on a role such as this that you have to stop yourself from giving notes or improvising too much? Or did they let you improvise and then they’re just taking credit for the funny material you add?

It’s always different.  In this case we had to stick pretty tightly to the script, except for a few things.  I think I improvised the line about my contact lenses being on the wrong eye (laughs), but it was mostly very close to the script because (my) scene is so technical.  When you’re shooting something like that you have to be very careful because I know how it will be when it’s cut together.  There were a few things that Jon (Hamm) and I improvised.  Jon had suggestions that we played around with.

Yeah, because watching that scene it really is incredibly choreographed.  How long does that take to perfect? You absolutely dominated that scene!

Oh my gosh, well, thank you.  Yeah, it was challenging with the technical stuff for me, because you’re trying to multitask.  I was juggling a lot.  Hitting marks (is important), hitting very specific marks, or you’re going to start a fire.  I kind of had to go into a zone to turn all my senses on.  It took us about a day to shoot that scene which, given all the technical stuff, I was pretty impressed (with).

Were you a fan of the original Fletch films?

I loved them.  I hadn’t seen them recently (though).  They were among my favourites from the 80s.  I was a huge Chevy Chase fan.  I still am.  I’ve always loved the Vacation movies.  When they sent this to me as an opportunity – it was Greg (Mottola) and Jon – I was like “Yes!”, but I was also a little scared because you consider the legacy of Fletch.  And then I thought “What if I ruin it?!” (laughs).

With (my character) Eve, there was no option but to dive in headfirst.  I just had a little conversation with myself and I just went along.  I promised myself I wasn’t going to judge myself.  Don’t censor yourself as you’re going.  I am very hard on myself, so it was really fun to be able to do that.  To not have time to think about anything.

Given how naturally funny you are as both as an actress and writer, it would seem comedy comes easily to you.  When did that love of comedy start for you? When you knew that this was a viable path…

I was very young.  I always had this weird perspective on things since I was a kid.  My mom said when I was like five years old, at the dinner table I did this impression of Mae West out of nowhere.  My mom was like “What the?” I don’t even know where that came from.  But early on my father was a lover of comedy.  We listened to old comedy albums on record.  Billy Crystal, Steve Martin…my dad would play them in the house and we would laugh.  I suppose that may have influenced me or pushed me further in that direction, but I definitely think I always had a weird perspective from other people.

Would there be any 80s property for you that you would write an overdue sequel to?

Oh (pauses). I would love to see Stripes.  It’s one of my all-time favourites.  But I don’t know if I would have the courage to go there.  That’s a conversation for another time, Peter (laughs).

Well, if anyone can do it, it would be you.  I really have to commend you on the way you’ve written women in comedy and showcasing their humour.

Straight white men have had their time so it’s about time women do their thing!

I feel like now we’re getting your take on Porky’s or something?

It’s time for some swinging dick I think…

(Laughs) Yes, just some swinging dick through the hole in the shower

Nope, you’ve buttoned it.  That’s where we end this (laughs). No interview can ever go any further.

Confess, Fletch is now screening in select theatres in North America and available On Digital and On Demand.  An Australian release date is yet to be announced.