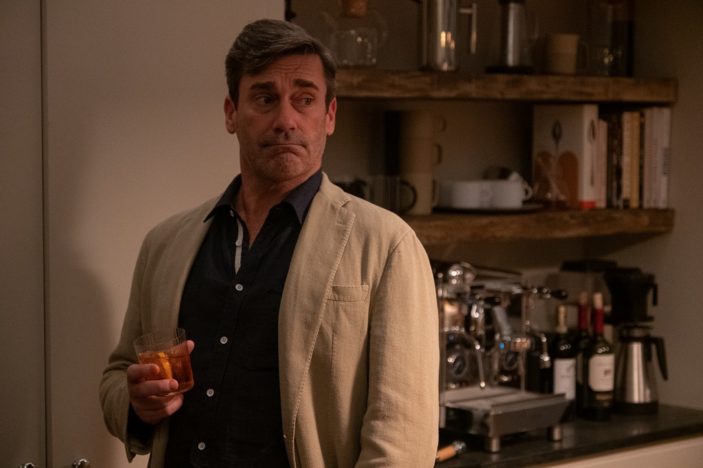 The idea of a Fletch remake/reboot/sequel has long been discussed for almost three decades now.  The obvious suggestions of Jason Lee and Jason Sudeikis were thrown around for contention to follow in Chevy Chase’s comedic footsteps during its production, but after consistent stop/starts it has fallen to Jon Hamm to pick up the mantle and dryly run with it for Confess, Fletch, a far funnier iteration than I gather many will be suspecting.

Hamm appreciators will all be too aware that his post Mad Men stints on 30 Rock and Saturday Night Live, as well as his extended cameo turns in such features as Bridesmaids, speak to his comedic appeal, and he manages to make the character of Fletch his own; he respects Chase’s embodiment rather than straight-up imitating it.

Presenting the film in an almost noir-type manner – of course with a humorous flair so we aren’t thrown for a loop when the dry wit flies fast – Greg Mottola (Superbad, Paul) puts Fletch right in the thick of it from the beginning when the titular detective finds a dead body in the Boston townhouse he’s been staying in.  He’s remarkably unruffled by such a discovery, which in turn puts him on the immediate suspect list of investigating detective Monroe (Roy Wood Jr.) and his rookie partner, Griz (Ayden Mayeri).

As Fletch points out, he called the detectives to the scene so his implication is a non-issue, but he’s so casual about the whole situation that it only elevates his suspicion, which naturally compels him to investigate the case himself.  What follows is classic genre fodder as a variety of eccentric personalities enter the fray to round-up an impressive suspect list.  There’s Angela di Grassi (Lorenza Izzo), Fletch’s new girlfriend and daughter to Count di Grassi who, coincidentally, has been kidnapped and is being held for ransom; Angela’s step-mother (Marcia Gay Harden, having a whale of a time with her exaggerated Italian accent that causes her to pronounce Fletch as “Flesh”), a sexually available woman who is seemingly fighting off Fletch’s advantages – even though he clearly has no interest; Horan (Kyle MacLachlan), a germophobic art dealer; and Eve (Annie Mumolo, hilariously manic), a gossipy next door neighbour; there’s also a hilarious appearance from underrated comedienne Lucy Punch as a trophy wife of sorts who falls for Fletch’s cover as a furniture enthusiast and can’t wait to wax lyrical on her bespoke home furnishings.  “It beteaches us something about ourselves.”

Whilst Mottola is no stranger to exaggerated comedy, it’s wise that he manages to keep things playing out relatively straight.  His downplaying the situation means the comedy itself is elevated, and whilst the previous Fletch films saw the character don goofy disguises and lean into the broadness of that humour, Hamm is more inclined to just alter his name and his personality to manoeuvre the situation.  He really is terrific in the role, and hopefully it won’t take another 30-or-so years before we see the character again.

Because the film opts to downplay its set-pieces, some viewers may find the film a little anti-climactic or uninvolving, but it’s the subtlety at play that allows the film to stand out amongst other capers.  Hamm’s perfect deadpan delivery and reactive line reading is the type of comedic gold that will earn this film a high re-watchability.  And though we could always do with more of the firecracker that is Mumolo – her prime scene with Hamm is hilarious – and the inclusion of a reunion with Hamm’s Mad Men co-star John Slattery doesn’t last nearly as long as we’d like (he plays his gruff newspaper editor), the 98 minutes we are treated to here are more than we deserve for a sequel we never thought we would see.  If Chase can manage a twofer, then one more Fletch calling for Hamm is surely something we can investigate.

Confess, Fletch is now screening in select theatres in North America and available On Digital and On Demand.  An Australian release date is yet to be announced.