Interview: Alex Liu on his documentary A Sexplanation; “Rather than living in that angst, I decided to talk about it” 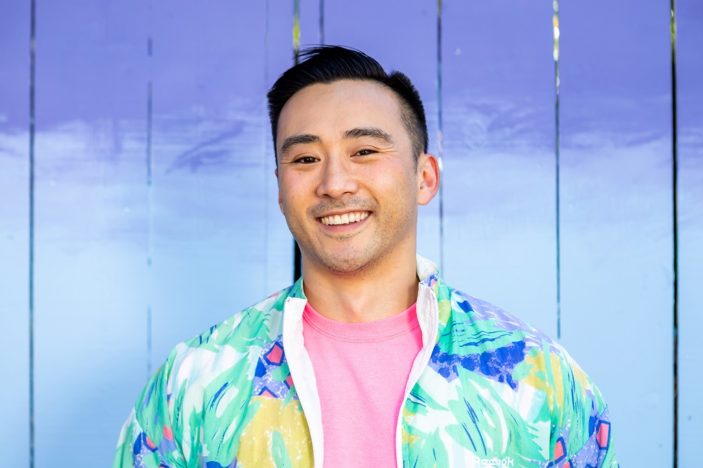 As his topical documentary A Sexplanation arrives for digital download in Australia (you can read our review here), creator Alex Liu spoke with our own Peter Gray about exploring the hardships of addressing such a controversial subject as sex education, how his own coming out was the catalyst for the film, and the surprising reaction he’s receiving from both queer and heterosexual audiences.

Was there one motivating factor for you behind taking the plunge in starting the conversation this film explores?

I think it went back to the fact of just being gay and being angry about the fact that I went through so much suffering of being in the closet.  All that type of stuff.  A culture that told me over and over again that I wasn’t worth it.  Ultimately, when I got into my thirties, I was out of the closet for a decade-plus, I was in a long-term relationship, my parents and grandparents, everyone knew, I was open about sex and I was having sex, but there was still that part of me that thought “I thought coming out of the closet meant all of those feelings and shame would go away.”  But it was still there.

Was there any difficulty in finally saying “I’m gay” and having that conversation?

Oh yeah!  It gives me hope seeing Gen-Z and how they don’t need to have that conversation.  They’ve always known and their parents know.  But then a part of me really hates them because they never have to go through that torturous experience of deep solitude and loneliness.  I can’t help in harbouring resentment for them.  But, as I allude to in the movie, I would rather have died than said I was gay at a certain point in my life.  That moment of saying it loud was the most difficult thing I’ve ever done in my life.

In terms of sex education, as explored in the film, do you think there’s an age that it should start to be taught?

(Laughs) We’re having these conversations in the States.  It is an “always on” type of conversation.  And people say “Even if they’re babies?”, but the conversations I’m having with my friends with babies, they’re shocked if their new-born boy has an erection, and their first instinct is to swat his hand away and to stop that behaviour.  It does start that early, and because no one wants to talk about it it sets the stage for sexual shame.  I think it’s an age-appropriate conversation.

At a certain point you need to talk to your kid about privacy, about communication and boundaries, but I think the message we should ultimately share with our kids is that it’s wonderful and magical and just pure joy that we have a body that can feel such amazing things.  That’s the message we should lead with.

Are you finding a different response between queer audiences and heterosexual audiences with the film?

For gay people, I think, it’s more like “Finally, someone is saying something!”  When you come out of the closet it’s a way of saying “Fuck you” to the world, in a way, because this is who we are and who we are going to be.  There’s something of a critical headspace already there (though).  A lot of the things about shame, gay people are more willing to talk about or question.  Whether that be about gender or kink, they’re already willing to go there.

What’s surprised me about straight people, because I didn’t know if they could relate or understand on the same level, they look at it as “Well I’ve never had to come out to society” so it meant they could easily repress or ignore certain stigmas.  In my way I’m saying that we’re all a little queer.  There’s something about us all that’s a little atypical, and the world would be better if we just come out that way.  It’s been great to hear straight people and straight couples  finally having conversations that they’ve never had before. 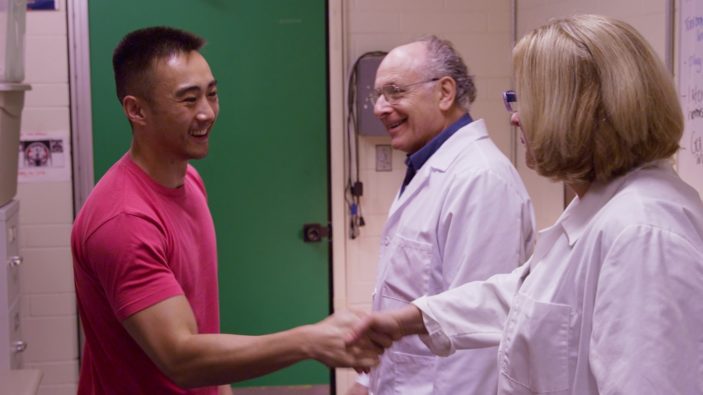 You’ve put yourself front and centre in this documentary.  Was that always the plan?

My background was always more of a health reporter.  Clearly I have a very healthy ego (laughs), but I always thought of myself as more of a news anchor or reporter where you are more the objective observer.  I thought I would just go to sex educators and various researchers, but the first step towards that (being in front of the camera) came when I spoke to the orgasm researchers.  They needed subjects and asked if I was willing to take part, and it started there.  I have a great creative team and they kept telling me that as much as the interviews were good, I was more engaging when talking about the why of the movie more than the movie we are making itself.  It took time to coax me to get to the deeper reason of why I was doing (the film), and it was a scary process, but I’m very glad I did it.

As you mentioned about the orgasm researchers, when going to talk to these people, is there ever any resistance on their part or was it all quite open-armed?

The sad part is they are so desperate for attention and for money.  No one is willing to fund (them).  Not once do they mention the word pleasure or orgasm.  It’s all nerve-endings and sensitivity…they have to hide it all.  It’s hard to get subjects, so they’re more than happy to talk about it.  They want to get their research out there.

I was so nervous for you just watching the scene where it’s you and the Utah Governor.  You’re both discussing your views and you can see some agreeance from him, but then him also remaining quite staunch on his views.  Did you ever worry it was going to get too heated?

I think if I had done that interview 2 or 3 years earlier, I would’ve come in hot.  I had to go through 3 years of therapy to get to this point.  What I realised was I was asking the world to not judge me and accept who I am, and if I came into interviews expecting that but unwilling to extend that to another, it would just not be possible.  We came into that interview with the idea of starting with everything we agreed on, then slowly getting to what we disagree on.  You see in the film where we disagree.  He’s a politician, so he has a base, and I came into it with some pre-judgements, but I found that he understood the other side, even if he didn’t agree with it.  That interview actually changed me in a lot of ways, in how I deal with conservative family members – Trump supporters, for example – I realise we’re never going to agree.  So let’s just deal with the areas that we can have a cordial interaction.

And you have the scenes of you attending the abortion rally.  That couldn’t feel any more topical right now.  How was it having those conversations and being in that environment?

(Sighs) Yeah, it was tough.  The vision of the world I want is that we’re open and free with our sexuality and maximising pleasure, and connecting with humans in the way that sexuality affords. And the right to abortion is the only way we can get there, because if someone is terrified that a sexual experience will completely alter their lives then it’s not going to be pleasurable.  There’s that one nun I spoke to (in the film) and she says some crazy things like “You can’t just be abstinent? You can’t stop yourself from walking into traffic?!”…to get to that point in life where you can’t entertain the other side is just so sad.

But there were some people I spoke to, Catholic students for example, where there was a point of agreement, where they did listen and were willing to talk to me in a way that wasn’t as vitriolic as I would’ve assumed.  As you can tell I’m still grappling with it.  I see them as full humans and I want to engage with them, but I just don’t know how to deal with them.  I don’t know how it is in Australia, but here in America I don’t know any other way than to listen and to talk and educate.  But it just seems so far away from where we are now.