Interview: Actor Thomas Cocquerel on the thrills and intricacies of Escape Room: Tournament of Champions

After Escape Room became one of 2019’s biggest surprise box office successes, netting over $150 million worldwide on a $9 million budget, it was no surprise when it was announced that a second trip behind the locked doors would be heading our way; Escape Room: Tournament of Champions.

Reuniting original director Adam Robitel and surviving stars Taylor Russell and Logan Miller, the anticipated sequel focuses on six people unwittingly locked in another series of escape rooms, slowly uncovering what they have in common to survive…and discovering they’ve all played the game before.

One of the new players to the game is Nathan, a priest haunted by survivor’s guilt, played by Australian actor Thomas Cocquerel.  The NIDA graduate chatted to our own Peter Gray ahead of the film’s local release and touched on the immersive experience of making the film and just how expansive these rooms truly are.

I understand that the horror genre is one you’re not a particular fan of but the first Escape Room was one you responded positively to?

Where did I say that? I don’t remember saying that (laughs) but it’s very true.  I’m a big scaredy cat.

Is there something in particular about horror movies for you?

I think it’s the horror and not thriller.  I loved A Quiet Place, and can’t wait to see that second one, so I think it’s more that genre.  This (Escape Room: Tournament of Champions) being more a psychological thriller, it’s a fun ride.  I enjoyed watching the first one and being a part of the second…I was stoked.  What an opportunity.

The sets for each room are quite elaborate and intricate.  Are they as expansive and as impressive in physically as they appear on screen?

Absolutely.  I mean there’s a fair amount of CGI, but most of it is practical and they really built the sets.  They are very impressive.  They’re much bigger rooms than the first (film).  Without giving too much away, the environment we had to work with were real and tangible.  It was really fun and immersive as actors in the film.

Do you have a particular favourite?

I did, for sure.  I don’t know what I’m allowed to say.  The sand room, which really used a lot of practical effects, was thrilling.

I liked that your character flips that expectation of what we presume a priest to look like.  Was that an appeal of this character?

Yeah, for sure.  He’s overcoming the past trauma of having done his own escape room.  As a priest he’s still struggling to come to terms with his relationship to God.  I found that really interesting.  That’s already an interesting character but then you throw him in an escape room with five other players that he doesn’t know…it was a fun character to play. 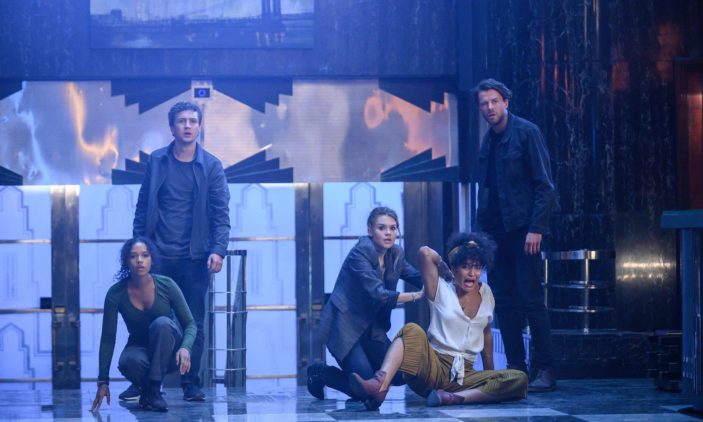 The survivor’s guilt aspect is heavily implied and there’s that inner monologue for him.  Did you have do much research into that mentality?

I did.  I’ve never done anything like this that required staying at a constant high-stakes level.  A film of this scale does take quite a while to film and you do these scenes over and over again, and to stay in that high tension and overcoming trauma of working the puzzles was really quite taxing.

Without giving too much away it’s safe to say there’s a few twists in the film.  What was your reaction when reading the script?

You know it’s funny, we didn’t really have a script before filming.  We turned up to set and kind of got to experience what (our characters) experienced.  Our number was called and we were taken into the rooms and we figured it out as we went along.  It was really cool.  Kinda scary (laughs).

Are escape rooms something you’re a fan of?

I had never done one before.  It was a quick turnaround between getting the film and working on it, but since finishing it I did have some friends back in Australia who took me.  We went as a group and it was fun.  I came in pretty confident having made a film about escape rooms, thinking we’d kill it, but we did not finish in time.  We would have all died.

I think it’s great that Sony held on to this film and wanted to put it out there in cinemas.  It must be nice to be talking about a film knowing it’ll be seen in a theatre during this current time.

Absolutely. We had so much other content to watch during the pandemic.  Cinemas are such an immersive experience and I’m glad that Sony did wait.  It would’ve been a shame having to see this on a laptop or at home.  It’s something that you want to share with other people.  Whether that be masked or unmasked, in a cinema with all the twists and turns is really fun.

Escape Room: Tournament of Champions is screening in Australian theatres from July 1st, 2021 (or from July 15 in areas affected by current lockdowns. Please check with your local cinema).