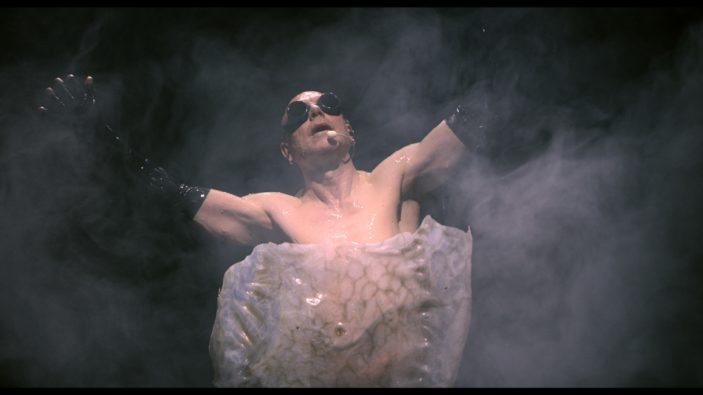 Billed as a docu-narrative, indicating that both fact and fiction will be blended throughout, I’m An Electric Lampshade is a bizarre take on the age-old “It’s never too late to follow your dreams” tale, focusing on the unlikeliest of pop star wannabes.

Doug McCorkle is the most basic of nondescript American men.  60-years-old, with the type of manner that wouldn’t be worth stopping in the street for, he’s lived the corporate 9-5 life as an accountant for the majority of his working life.  Married but with no kids – meaning the dual-income household for him and his wife has had its perks – Doug’s ready to retire early and put himself first.  And the next chapter of his life looks to encapsulate his love of music, with the DJ enthusiast set to follow through on his desire to be a musician.

As an aforementioned docu-narrative, Doug, the person, is someone who is very real, but the story itself is something of an embellishment of his artistic ambitions.  It’s difficult to decipher just what is real and what’s exaggerated, but it doesn’t really appear to ultimately matter, with director John Clayton Doyle delighting in both the cringe-worthy discomfort and the utter joy that comes with embracing a new identity.

The film initially toys with the mockumentary style of the single-camera sitcom set-up, ala The Office, where Doug’s co-workers are interviewed.  They’re an expectedly mundane bunch, amused by the smallest of details, and when he expresses his intention to focus squarely on his music career at his retirement party, it’s supportive but nonetheless cautious ears that listen; to say the reactions to his EDM-inspired music video are awkward would be a colossal understatement.  But, as easy as it would be to mock Doug and laugh at him, the film wholeheartedly supports him – it’s a film that believes in him.

What’s most surprising about Electric Lampshade though is that it takes the road less travelled when it focuses on Doug’s music career, taking him to the Philippines where he works with a predominantly queer troupe of dancers and drag performers in his bid to announce himself as the performer he so desperately wants to be; his cover of Lily Allen’s “The Fear” proving to be one of the film’s most unexpectedly fascinating moments.  It’s also of considerable note that this is a film that basks in the glow of genuine alacrity.  It treats the LGBTQIA community with respect and Doug himself is someone devoted to his wife and friends.  There’s no “finding himself” by removing certain aspects of his life, he simply is a good person with a passion that may appear off-kilter to many but embraced by those that know how it is to live on the outside of “normality”.

Doug’s music isn’t easily accessible to the masses – YouTube and Spotify both don’t return any searches – which plays further into just what is fact or fiction about his musical journey, but I’m An Electric Lampshade feels more catered to demonstrating an uplifting mentality.  Everyone has a talent, and everyone can truly be a somebody if they just trust their inner self.  The film isn’t without its faults – its shift towards focusing on Doug’s trip to the Philippines takes some adjustment as it momentarily feels as if his story has been abandoned – but as a story that dedicates itself to positivity, it’s a slice of celluloid worth celebrating.

I’m An Electric Lampshade screened as part of this year’s Los Angeles International Film Festival, which screened virtually between November 16th and 21st, 2021.