God Save the Queens; what it lacks in biting humour, it makes up for in beating heart: Tribeca Film Festival Review 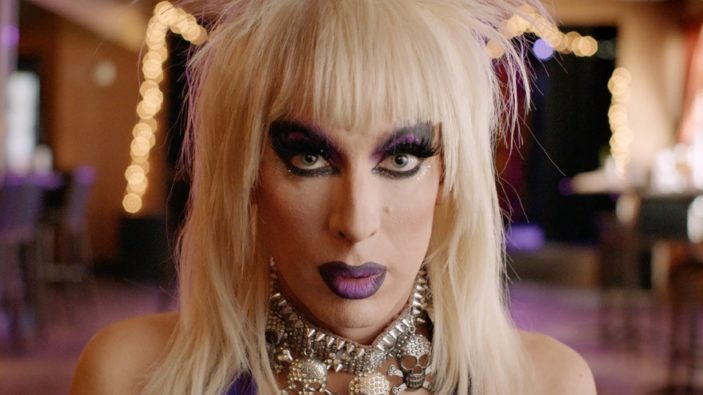 The cultural phenomenon that is RuPaul’s Drag Race has made way for otherwise niche performers to breakthrough in a mainstream fashion.  Whilst it’s still more likely that queer audiences will recognise their presence in a stronger manner, it must be said that the program knows how to unearth the type of talent that deserves to be seen beyond the nightclub circuit they traditionally worked.

A quartet of Drag Race‘s more stand-out performers – Laganja Estranja, Alaska Thunderfuck, Kelly Mantle and Manila Luzon – have put their best theatrics and unique looks forward for Jordan Danger‘s God Save the Queens, a slice-of-life dramedy that may not necessarily succeed in delivering a clear message (is therapy ultimately useless?), but offers enough light laughs to be worthy of their fans’ time.

Presented in a vignette style that offers up three distinct storylines, God Save the Queens ultimately culminates with each queen facing themselves in a secluded therapy session, with writer/director Danger clearly revelling in the notion of self-important retreats (here it’s a desert-based location known as Serenhaven) and the bohemian types that usually run them.

Before getting to said retreat, the film flips back and forth between each of their respective days and how they got to the point that they need to discuss their feelings.  First we meet Gigi (Jordan Michael Green), a drag queen with a supportive home life but a lack of employment and a desperation to sell tickets to her upcoming one woman show.  Then there’s Marmalade (Mantle), an ageing queen (and she knows it) trying to hold onto her prominence, currently prepping for a performance that will hopefully impress a visiting talent scout (Drag Race judge Michelle Visage flexing her coldness with ease).  Finally, Stevie Dix (Alaska) and Rita Royale (Estranja), two halves of musical duo Dix Royale who have fallen out over the former’s supposed seduction of the latter’s boyfriend; the aforementioned Luzon has a brief support turn as Kiwi, a drag performer who’s forced to overexert herself in the absence of the sarcastic Stevie to a drag brunch.

As much as each of the queens have their own troubles and crisis to tend to, Danger assures us with the film’s very tone and oft-sarcastic performances that none of this should be taken remotely seriously; which, again, doesn’t exactly help the message it seems to be displaying regarding the usefulness of therapy, especially when “God” herself (Luenell) interjects to add words of wisdom.

Of course, you don’t watch a film such as this for anything deep and meaningful.  God Save the Queens is pure entertainment for that sake alone, and whilst none of the material is quite as biting as to what the likes of Laganja or Alaska are capable of on their own accord, it has fun in letting the queens express their witty abilities and commenting on how Drag Race is essentially the most knowledge basic white girls have of drag culture; that, and Miley Cyrus.  Additionally, the film has quite the array of supporting players, with Zack Gottsagen injecting some much needed heart as Dix Royale’s biggest fan, Joaquim de Almeida as a talent agent essentially pitting the girls against each other, and New Zealand actress Kimberly Crossman, easily the stand-out, as Harlowe, a famous club performer who unknowingly gets entangled in Gigi’s one woman show.

Staying true and speaking up for yourself ultimately emerge as the film’s predominant message and, unsurprisingly, it’s all wrapped up in a neat-enough bow that is likely to leave audiences feeling good about themselves; again, rather ironic when each of the queens are skilled at insulting such a crowd.  Though it may not break out from appealing to the built-in fan base, God Save the Queens is a satisfactory comedy that could’ve been more biting overall, but can’t help but be embraced due to its cute charm and expected sparkle.

God Save the Queens is screening as part of this year’s Tribeca Film Festival, which is being presented both virtually and physically between June 8th – 19th, 2021.  For more information head to the official Tribeca page.