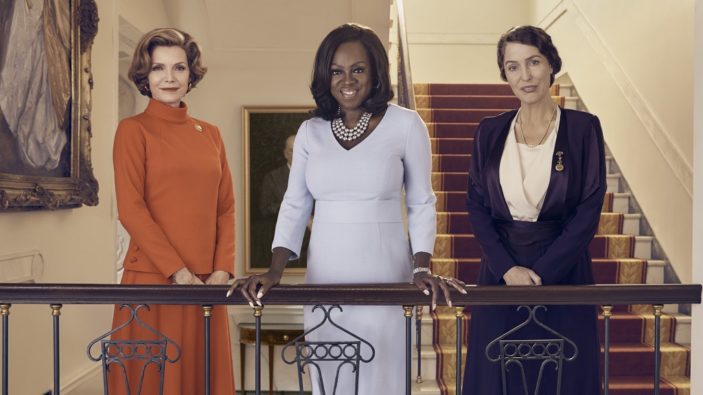 As Gillian Anderson states – under a set of prominent teeth that appear almost caricaturish in their imagery as Eleanor Roosevelt – being a first lady isn’t a job, it’s a “circumstance”.  Such a circumstance, it would seem, that Showtime thought it only fair to showcase the women behind some of the most powerful Presidential figures in history, rightfully assembling a powerhouse ensemble of capable actresses to breathe life into the prolific women we thought we knew.

The aforementioned Eleanor Roosevelt, Betty Ford (Michelle Pfeiffer), and Michelle Obama (Viola Davis) are at the centre of Susanne Bier‘s anthology series The First Lady, a 10-episode arc that follows no real chronological structure or sets any particular profile on any of the women; rather loosely (at times) connecting them through parallels as they navigate their own dynamic supporting their powerful husbands.

Over the course of their predominant eras – Eleanor throughout the 1920’s and 1930’s, Betty in the 1970’s, Michelle in the late 2000’s and early 2010’s – the debut episode of The First Lady tries to establish their mentality regarding their position as a supportive wife more than their professional duties, something the six-person strong script has trouble strongly establishing for each first lady.

The narrative surrounding Michelle and Barack Obama (O.T. Fagbenle, fine but adhering to more an impression than anything organic) is primarily focused on their initial entrance to The White House and the preceding years where his security detail and political aspirations upset her own career narrative.  Given how recently the Obamas were serving in The White House and how open they appeared regarding their loving union, Michelle’s projected fierceness is somewhat of a surprising addition, though it’s perfectly within reason to present her as a woman unafraid of speaking her mind.

The main projection surrounding Eleanor in the debut episode is primarily around her stance as a supportive feature for husband Franklin D. Roosevelt (Kiefer Sutherland), struck down with a paralytic illness – thought to be polio at the time – in the decade prior to his 12-year reign as President.  Tension with Franklin’s mother (Ellen Burstyn) and the friendship with her personal aide (Clea DuVall) are mere footnotes in the early minutes, with her eventual affair with journalist Lorena Hickok (Lily Rabe) being saved for future episodes.

Then there’s Betty.  When we first meet her she’s shaking a cocktail shaker, shimmying across her floor, dreaming of a sunny retirement with husband Gerald (Aaron Eckhart), blissfully unaware of the Vice Presidential position he’s soon to inherit following the resignation of the disgraced Spiro Agnew over tax evasion and fraud charges.  Whilst no one could ever accuse Eleanor or Michelle of maintaining a certain silence, Betty is presented here as the most forthcoming and headstrong.  She’s willing to support her husband’s aspirations, but she won’t be silenced into submission, and the show truly flexes its intelligence in not presenting Betty as any type of stereotype regarding her alcoholism.

In Betty being the most interesting character, The First Lady also ends up falling entirely on Pfeiffer’s shoulders.  Though Anderson and Davis aren’t slouches when it comes to their embodiments, the lack of subtlety in their dialogue (everything Anderson says sounds like a platitude of sorts) and a more impressionistic temperament to their performances means neither Eleanor or Michelle feel like real people; Davis’s pencil-thin eyebrows and her odd mouth placement bordering on farce rather than purity.  Pfeiffer, however, manages a more lived-in mentality when tackling Betty, injecting a flamboyance that’s entirely wholesome, leaving this first episode to only ever feel like it’s earning its dramatic weight when she’s involved.

The First Lady is streaming its episodes weekly on Showtime in the US and Paramount Plus in Australia.