Film Review: The Harder They Fall is a violent western spectacle that redefines the prominence of people of colour 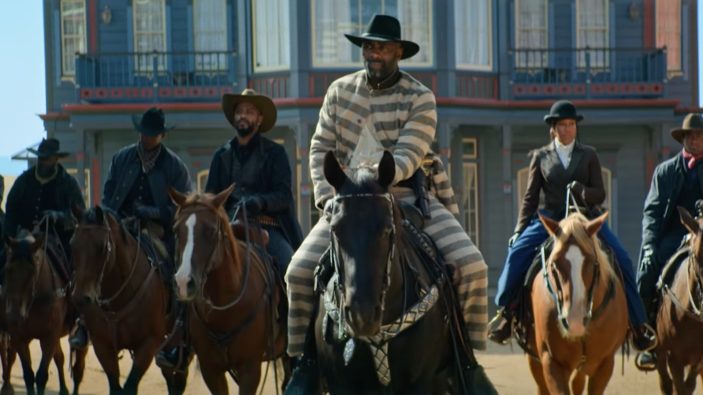 “While the events of this story are fictional…These. People. Existed.”

These words hit harder than any bullet or bass snare experienced in The Harder They Fall as they sprawl across the screen in the opening seconds of Jeymes Samuel‘s Black Western fantasy.  Perhaps, in a way, an almost spiritual sequel to Mario Van Peebles’ genre-breaking 1993 outing Posse, Samuel’s film redefines the social standings of African Americans in the wild west.

People of colour have often been painted as little more than submissive in the genre shades of the western – women even less respected – so something like The Harder They Fall feels even more prevalent in its storytelling.  And though Samuel delights in such status reversal, his film isn’t concerned with addressing any racial issues.  Rather, he’s here for the spectacle, the exaggerated, modernised dialogue, the violent, expertly crafted set-pieces, and a musical score that’d make Tarantino weep with pride; Jay-Z serving as the film’s producer.

Though such figures as Nat Love, Rufus Buck, Stagecoach Mary, and Cherokee Bill are all names that have a distinct place in history, Samuel’s film is by no means deep-diving into their psyches, instead presenting them as almost super-hero like creations, all slinking on screen with an unrivalled swagger and sex appeal.  Love (Jonathan Majors) and Buck (Idris Elba) are the figureheads of their own respective gangs, and much of the 137 minute running time is devoted to each crew hunting the others down, resulting in an inevitable showdown that delights in a violent glee.

Whilst the narrative is simple, the complicated dynamics of each character allow the plotted flow to elevate above its absence of decoration.  Love may have just cause in wanting to murder Buck – their history opening the film where Love, as a child, witnessed Buck executing his family, before violently branding the young boy – but he’s an outlaw in his own right, and Samuel’s isn’t afraid to devote his film to an anti-hero who, in any other film, would be painted as a villain through and through.  Samuel also makes a note of placing women in a place of importance, both narratively and within the action, with Zazie Beetz and Regina King earning plenty of mileage as the right-hands to Love and Buck, respectively; Danielle Deadwyler also makes her presence felt as the gender-fluid Cuffee, a quick-drawing bodyguard whose slender frame proves deceptive in its brutal ability.

Enjoying itself immensely as it re-shapes the prominence of black people in the Old West, The Harder They Fall is an invigorating tale, breathing new life into a genre that so seldom gets the chance to ride the cinema screens in the manner it used to.

The Harder They Fall is screening in limited release in Australian cinemas from October 21st, 2021, before streaming on Netflix from November 3rd.