Film Review: Promising Young Woman is a delicious indulgence that will make your stomach churn 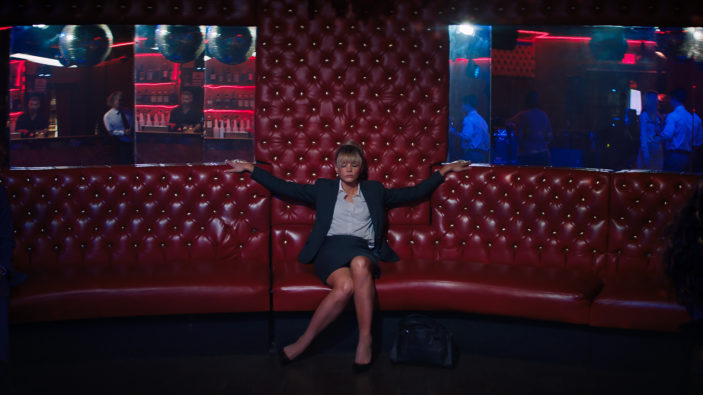 With an often bright, candy coated aesthetic that masks a darker, more poisonous taste inside, Promising Young Woman, Emerald Fennell‘s bold debut, is the type of delicious indulgence that will ultimately make your stomach churn.

Headlined by a career-best Carey Mulligan (her performance sure to be a consistent contender come award season), Promising Young Woman places its focus on her snappy Cassie, a 30-year-old medical school dropout who, on the surface, isn’t living up to her obvious potential.  Despite not-so-subtle hints from her parents (Clancy Brown and a deadpan hilarious Jennifer Coolidge), Cassie has no intention of moving out of home – a frozen in the 80’s type decor only adding to the film’s off-kilter temperament – or advancing beyond serving coffee at a local haunt; Laverne Cox makes for enjoyable support as Cassie’s manager-cum-friend, Gail, who is similarly pushing her to better herself.

Her day job may not be satisfying – she does get to snap “No” at customers and blatantly spit in their coffee though – but at night time she truly thrives, lurking on unsuspecting men in her bid to teach them lessons on morality.  Playing pretend as a woman close to incapacitation, Cassie lets whichever schmuck take her home under the pretence that he’s going to be able to bed her due to her inability to function.  As they get closer and closer to non-consensual activity, Cassie very much makes it known that she’s sober and in control of her body, and that these men should think twice before attempting such a ploy again; Adam Brody, Christopher Mintz-Plasse and Sam Richardson just a slew of the familiar faces learning their lesson.

It’s very obvious that something traumatic has happened to Cassie in order for her to adopt such a vigilante mindset, and when Fennell’s tight script introduces us to Ryan (Bo Burnham), a former classmate of hers, it comes to light as to just what exactly she’s suffering through.  Infected with a form of survivor’s guilt, Cassie’s rage stems from the sexual assault and ultimate suicide of a close friend, Nina, who was brutally attacked at a college party at the hands of many of her medical school cohorts.  Unable to save Nina, Cassie’s violent tendencies towards her male prey is a form of cleansing her city.  She’s angry (rightfully so) and learning from Ryan that the main culprits of Nina’s downfall are living their best lives only spurs her further to right whatever wrongs possible.

When Promising Young Woman begins, Fennell approaches the film with a much lighter mentality, its tongue firmly planted within its cheek.  In addition to the snappy dialogue and self-aware cutesy love moments between Cassie and Ryan as they rediscover each other – there’s one moment set to the unlikely tune of Paris Hilton’s pop opus “Stars Are Blind” that is truly masterful – it’s the manner in which the film points out just how unsexy certain cliches are when the genders are flipped.   The standard club scene where women are scantily clad and photographed gyrating in slow motion is given a much needed facelift as the obvious dehumanisation felt in such sequences is put to display when Fennell opts to focus on men rather than women.  Here, horribly dressed, flat-bottomed businessmen, with their bellies peeking out from under their loose unbuttoned shirts, are the subject of a lingering camera.  It’s hilarious in its awkwardness, but it’s reaffirming, however on the nose it may be, how terrible a cliche it is and that this is one film intent on penetrating the norm.

Once Cassie learns of the wellbeing of Nina’s attackers – and their subsequent enablers – the film shifts into something much more sinister.  Targeting not just those directly responsible, but the institution that valued a young man’s bright future over the cries of a woman as well – one sequence involving Cassie meeting with Connie Britton‘s college Dean is shockingly telling in just how victims are treated – Promising Young Woman takes aim at rape culture in an aggressively subtle manner.  A woman seeking justice is somehow seen as an attack on a man, and the more she screams foul, the more her attacker is somehow transformed into the victim.  It’s a horrible statistic, but one that sadly rings true, and this notion of men protecting men in the throws of rape accusations is one the film attempts to sideline from our society.

Where Promising Young Woman will ultimately test its audiences though is in its final moments.  Always making sure to never travel entirely where you expect it to, Fennell’s bold decision to end on this particular note keeps true to both its characters motivations and the narrative core that situations don’t always end the way you think they should.  Cassie is a fire waiting to be ignited, and her ultimate blaze burns everything around her, including the notion of a traditional ending.  Some will agree with Fennell’s daring choice, others will reject its acidity, but it can’t be denied how much power is contained within a bubblegum sheen that bursts with energy and honesty.