Film Review: Moonage Daydream is a headfirst dive into the unmatched, other-worldly psyche of the one and only, David Bowie 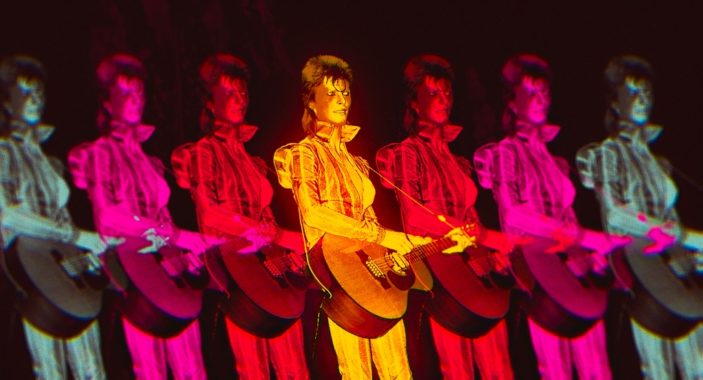 A feast for the eyes and the ears, Brett Morgen‘s Moonage Daydream is a headfirst dive into the unmatched, other-worldly psyche of the one and only, David Bowie.  In some aspects Morgen – who is no stranger to the musician-centred medium, having helmed the Nirvana doco Kurt Cobain: Montage of Heck – has adopted an “everything but the kitchen sink” mentality when curating this non-traditional documentary, having worked through decades of soundbites and outtakes and film footage, and merging them with unrelated silent cinema clips (Nosferatu and Metropolis, being two prime examples) and brightly coloured imagery to create the type of sensory overload that one would expect from a figure such as Bowie.

It’s all a bit overwhelming when the film first starts, and at 135 minutes it never flirts with underperforming, but given its bombastic nature and more-is-more temperament, audiences unversed in Bowie are unlikely to be swayed.  As stated, this isn’t a traditional piece about his beginnings, nor the later years leading to his death – in 2016, at the age of 69, he passed away from liver cancer after a private 18 month-long battle – but rather the deep-seated album cuts of his life.  Bowie’s existence was a greatest hit in itself, but Morgen finds the delight in uncovering the chameleonic performer’s oddities – something fans will wholeheartedly embrace, but general masses may not warm to.  Having said that, whatever your stance on him as a performer or a human, it’s impossible to deny his unique artistry and the ceiling-breaking, gender-blending mentality he honoured throughout his career.

Whilst Moonage Daydream – so named after the 1971 song that he originally released through his short-lived band Arnold Corns, before re-recording it the year after as a glam rock cut for his “The Rise and Fall of Ziggy Stardust and the Spiders from Mars” LP – delves into certain personal aspects of Bowie’s life (there’s some quite revealing notions on his brother’s struggle with schizophrenia), the film doesn’t necessarily have a structure or a desire to open him up to viewers from that particular angle.  It feels more like a celebration of his uniqueness, his weirdness, to drive home for his fans that being creative and your authentic self is ultimately what matters.

Fitting with his subject, Moonage Daydream is a risk of a project.  It’s loud and arresting, but life-affirming all the same.  It celebrates the man at its core, which Morgen finds more fascinating than necessarily framing him as a man to understand.  We accept that Bowie was an original, a figure who designated his identity to no defining gender, and in this kaleidoscopic explosion of kinetic colour, a film emerges as one that Bowie would be immensely proud of.

Moonage Daydream is screening in Australian theatres from September 15th, 2022.