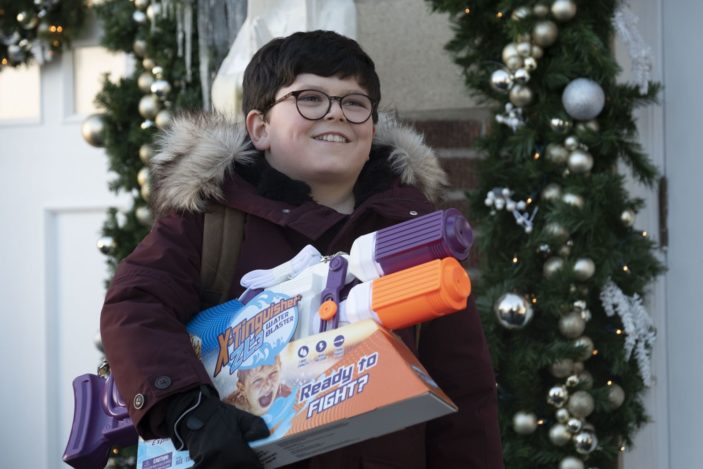 There’s a moment during Home Sweet Home Alone where two characters are watching a remake of the fictional “Angels With Filthy Souls” – you know, that quotable film within a film that Macaulay Culkin used in a manner to frighten the pizza delivery boy (“Merry Christmas ya filthy animal) – and comment on why studios bother remaking the classics; “They’ll never be as good as the original”.

It’s the smartest piece of dialogue in a film that seems to indicate Disney are entirely self-aware and in on the joke.  It also showcases how much the House of Mouse doesn’t remotely care about their clout, seemingly satisfied to remake their classic IP titles – well Fox’s titles, if we’re getting technical – with very little regard for the original’s standing.  “Classics were meant to be broken”, so says this film’s tagline, and, ironically, this horrid excuse of streaming minutes only reinforces how strong the 1990 original truly is.

Not exactly a remake, but more a legacy sequel where the original characters exist in this created universe – Buzz McCallister (Devin Ratray), the annoying older brother to Culkin’s original mischief maker, has a small supporting appearance as a police officer who disregards his civic duties due to his experience on the wrong side of pranks – Home Sweet Home Alone is unable to emulate any of the humour or charm that John Hughes evoked, with young Archie Yates a dreadful substitute as this film’s home alone tyke, Max Mercer.  Yates has proven himself adept at comedy – see Jojo Rabbit for proof of his ability to land a joke beyond his years – but here he’s saddled with a painfully comedy-free script that strips him of any likeability; to say that we kind of hope the home intruders he faces off against would take him down is an understatement.

Speaking of which, said home intruders are a far cry from the bumbling, violently-minded Daniel Stern and Joe Pesci, here arriving in the form of Rob Delaney and Ellie Kemper, two more comedically capable performers who also embarrass themselves as Jeff and Pam McKenzie, unwilling criminals whose sole reason on breaking into the Mercer’s home is the most unlikely of MacGuffins.  Parents who we are supposed to feel sorry for due to their money woes, Jeff and Pam are under the assumption that Max lifted a priceless heirloom from their home during an open house, and instead of simply knocking on the door and asking for it back, they break and enter – though that’s a term used loosely here – when they realise young Max is home alone; his family having “forgotten” him during their rushed process of getting to Tokyo for an extended family getaway.

In the original when young Kevin was left behind, however much of a stretch it truly was, it worked in the realms of the heightened plot.  Here, Max being excluded hardly seems plausible – though he’s such a little shit I’d want to leave him behind too – and any of the genuine care and frazzled mentality that extended to original mother Catherine O’Hara as she sought out ways to get home is hardly emulated here through Aisling Bea (another damn comedienne drowning in pathetic material) who, more or less, overdoes the reactive responses as if she’s playing to not just the back of the room, but the whole damn suburb.

Max’s enjoyment of being home alone is short-lived and hardly revolutionary – he enjoys mountains of candy, dresses in his mother’s clothes, and skates down the staircase (what joy!) – and the tricks he pulls on Jeff and Pam have none of the macabre flair Kevin executed; an extra slippery driveway? You little scamp! And I’m sure you’re wondering why Max doesn’t just call the police or ask for help – it’s OK if you aren’t that invested – and the Mikey Day/Streeter Seidell-written script addresses this in the most throwaway fashion, further cementing the fact that so much of Home Sweet Home Alone is designed-by-numbers to merely earn those streaming miles from children who are easily amused and unbothered with consuming quality.

Whilst I could be called out for my lack of enjoyment due to the fact that I am clearly not the target audience, I can still appreciate a family-minded affair when I see one, with the original Home Alone and its boisterous sequel Lost In New York still remaining immensely watchable due to their genuine wit and desire to aim above their familial temperament.  Here, Dan Mazer (director of the useless Dirty Grandpa and writer of the Borat films, indicating he’s better at creating comedy than staging it) doesn’t just aim for the bottom of the barrel, he buries himself and his usually capable cast underneath it.

No longer will coal be the punishment for naughty children at Christmas time, Home Sweet Home Alone will be instead.

HALF A STAR (OUT OF FIVE)

Home Sweet Home Alone will be available to stream on Disney+ from November 12th, 2021.