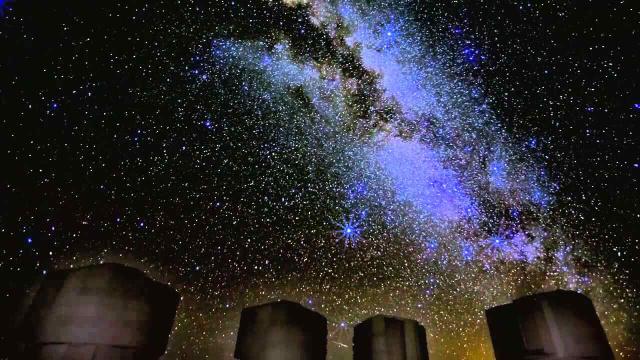 Now screening at IMAX Darling Harbour in Sydney, Hidden Universe 3D sets quite a few milestones for the Australian film industry. Most notably, the shortform IMAX production marks the first time an IMAX 3D film has been produced and directed by an Australian team. It was suitable, therefore, to premiere the film in a special screening at the IMAX in Darling Harbour – which is currently largest IMAX screen in the world.

Watching feature films in the IMAX format can be difficult. Even when filmed in IMAX lenses, most directors (Christopher Nolan notably excluded) don’t seem to take into account the impact of watching a film on a large screen. Intense close-ups and shakey cameras can make IMAX screenings of Hollywood blockbusters a sometimes nauseating experience, especially when 3D is thrown in for good measure. That’s not to say it’s not without its merits – higher resolution, often more successful and immerse 3D effects and incredible sound for starters – but it’s in the standard short form IMAX produced films that we find the content that is most suitable for the screen.

Long shots which use the IMAX format to immerse you in that world; not make you feel like you have to move your head every 5 seconds to capture everything that’s going on. A slower pace to ensure you have the time to take it all in. They’re usually documentaries and almost always encourage the attendance of large groups of school children during the daytime as a result. Hidden Universe 3D is no exception. This is a film that is developed with the intention to provide audiences with an expedited lesson in our current exploration of space through the use of high powered telescopes in high elevation deserts. We meet the astronomers behind these projects, whose sole goal and duty is in exploring the known (and unknown) universe and developing our knowledge of “what’s out there”.

The film is in many ways a love letter to astronomy, with those interviewed in the film the sort of passionate souls who in their very nature want to encourage you to be an astronomer too. And in that respect, I’d be surprised if those aforementioned school groups didn’t have a few among them who left the film going “I want to do that too!”. I know I felt the urge. I think I’ll stick to writing though for the meantime…

Though the message of the film is in the importance of astronomical studies and a brief lesson in exactly what they have been discovering along the way – the power of the film is in its imagery. The 3D is used to brilliant effect as we look through what must be one of the most impressive slideshows of astronomical graphics seen to date. The more recent photographs from Mars, in particular, were quite mind blowing. And the journeys into the outer most regions of the known universe were as beautiful to look at as they were fascinating. You truly feel immersed in the world – which is of course what the format sets out to achieve.

The film was narrated by Golden Globe winner Miranda Richardson who did a fine job, though it wasn’t a film without its problems – the soundtrack was a bit over the top, for starters, and some of the ground was covered a little too extensively. But this is nonetheless a near perfect articulation of why the IMAX format remains a vital way to educate and inspire. It creates immersive worlds that can stun and fascinate both young and old, while the effects the very size of the screen allows puts any other “large” screen to shame.

At 45 minutes in length, this isn’t a film that will require a huge amount of time commitment and anyone with any interest in space at all will be blown away by some of what they see. And if you aren’t a fan of “what’s out there” I’d challenge you to see this film and not leave it with a appropriated perspective.

And what’s amazing about it all – and makes my head hurt – is that there’s still so much more out there to learn about and discover. And that’s exactly what makes all the players in this film all the more excited as well.

Hidden Universe 3D runs for 45 minutes and is rated G. It is in IMAX release at Darling Harbour in Sydney. For more details, head to http://www.imax.com.au/