Film Review: Freaky is a crowd-pleasing horror/comedy that’s deeper and funnier than it has any right to be 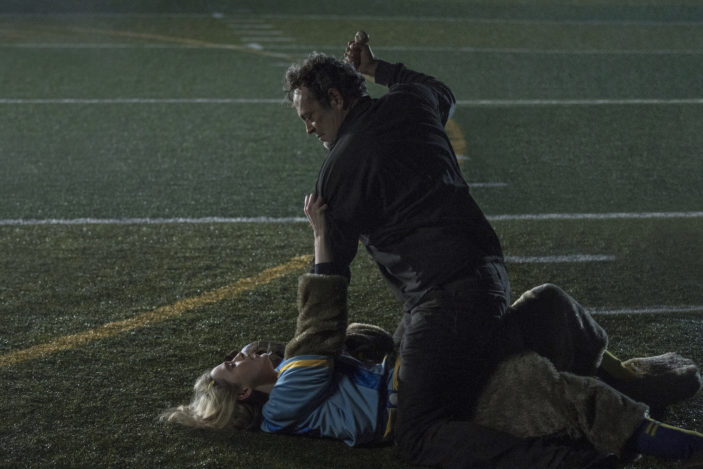 Coming off of such aggressive roles in features as Dragged Across Concrete and Brawl In Cell Block 99, the thought of Vince Vaughn flailing his arms and strutting with the poise of a flustered teenage girl is one that’s all the more appealing when you view it in its actuality.  And it’s the hulking 6’5 framed star’s sheer dedication to the role that elevates Freaky‘s already enjoyable premise to something far more endearing than it has any right to be.

Before Vaughn embraces his inner teenage girl, Christopher Landon‘s delicious horror/comedy starts off on a rather brutal note as he slashes through a disposable lot of teens as the infamous Blissfield Butcher, an urban legend-type serial killer who, depending on who you ask, has been slaying locals anywhere between 30-50 years.  Within the film’s first 10 minutes Freaky wholeheartedly embraces its gory slasher roots (sequences involving a toilet seat and a broken bottle rank as two of the more inventive kill pieces), whilst also setting up a little supernatural mythology that easily explains why the Butcher’s soul and body are ultimately displaced with that of a teenage girl.

Said teenage girl is Millie (Kathryn Newton, an absolute delight), an everyday-type student who’s still somewhat coping with the loss of her father and the subsequent alcoholism of her mother.  Whilst not friend-less – we’re introduced early on to her two best cohorts, Nyla (Celeste O’Connor) and the flamboyant, biting Josh (Misha Osherovich) – she’s a relative outsider at school, suffering through bitchy retorts from the popular clique, sexist comments from the jocks, and pining in the distance for Booker (Uriah Shelton), an archetype of both popularity and jockdom that manages to break through the genre pattern by presenting himself as inherently likeable.

How Millie and The Butcher come into each other’s vicinities happens rather organically, at least within the realms of a supernatural body-swap horror/comedy, when she is stranded after the local football game, thanks to another evening where her mother has blacked out from the coping mechanism of liquor.  When The Butcher targets young Millie she manages to successfully thwart his plans, but not before earning a substantial stab from his end with, of all the things, a mystical knife that just so happened to be flippantly mentioned in the film’s opening; gotta love a film that doesn’t bunker down too hard on exposition.

The stab wound from the knife and the setting date of Friday the 13th means Millie and The Butcher have unwillingly swapped bodies, and it seems that will be a permanent fixture unless Millie-as-The-Butcher goes after The-Butcher-as-Millie and stabs herself(?) within 24 hours.  You following?  As much as the “Freaky Friday meets Friday the 13th” elevator pitch premise would have sounded fun as a concept, Landon and co-writer Michael Kennedy have created something so much more cohesive than what I imagine people will expect.  As Landon’s previous effort Happy Death Day demonstrated, he knows how to lean into the awareness of the genre whilst injecting enough humorous and emotional nuances for it to transcend its familiarity.

From a Friday the 13th-style slasher perspective, Freaky absolutely delights in letting its bloody flag fly free – a set-piece involving an after hours stand-off between Butcher Millie and Alan Ruck‘s shop class teacher is wonderfully graphic – and as a Freaky Friday-minded comedy it’s an A-grade showcase for both Vaughn and Newton in their pitch-perfect demonstration of imitation with performances that go beyond mere mimicry; one of the film’s many moments to highlight Newton’s subtle comedic prowess is when The Butcher awakens in his new surroundings as Millie, looking around with a haze, her retainer gradually slipping out of her open-jawed mouth, with an initial confusion and revulsion graduating to a newfound appreciation of her now-unassuming identity.  Newton nails every shade, and her quiet, aggressive demeanour opposite Vaughn’s dainty delivery is a thing of unexpected grandeur.

Perhaps what is most impressive about Freaky though is the queerdom running through its veins that it treats so respectfully.  Slashers tend to be a subgenre of the horror canon that barrack for the outsider, and here in Freaky we have a film written and directed by two gay men – society’s outsiders – who have the confidence to play around with the tropes enough that it can’t help but feel like a victory in skewering the genre just so; apart from the character of Joshua being out, proud and sure of himself, it’s Landon and Kennedy’s approach to exploring the relationship between Millie in her Butcher form and Booker that feels the most progressive, especially in a mainstream, mass marketed film.  To say the sequence of a lovelorn teenage boy baring his soul to a doe-eyed Vaughn who, in return, wants nothing more than to share their elusive first kiss is remarkably tender (as well as genuinely hilarious) would be an understatement.

Only mildly undone by an ending that feels like it was hoping to set up a sequel, only to renege to feel a little more definitive, Freaky is a crowd-pleasing crossed-genre event that’s deeper, funnier, and more committed than it has any right to be.  The opposing forces of Newton’s cowardice-cum-carnage-ready mentality and Vaughn’s domineering-turned-darling temperament is what drives this on the surface, but lurking underneath is a respect for both the genre and its inclusive audience that proves Landon’s penchant for re-imagining horror narratives is a trait worthy of continued embrace.