Film Review: Everything Everywhere All At Once is everything that makes cinema as magical as it truly is 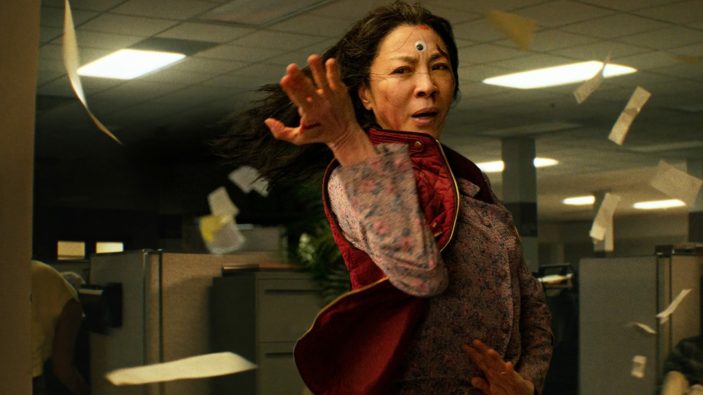 The idea of a multiverse isn’t a new faction within the science-fiction film realm, but because the comic book movie has become more and more prominent in the last decade – and last year’s biggest film took the idea and ran with it to the most epic of proportions – no doubt something like Everything Everywhere All At Once will seem as if it’s jumping on a bandwagon.  Marvel and DC will continue to explore the multiversal opportunities in some of their upcoming projects, but, for now, The Daniels (Swiss Army Man filmmaking duo Daniel Kwan and Daniel Scheinert) have beat them to the punch with an indie, likely-to-be-funnier iteration that truly defines the joy of a film embracing its originality.

It isn’t the easiest film to define, but at its core sits Evelyn (Michelle Yeoh, an unstoppable force) who, quite simply, just wants to file her taxes.  Yes, if you strip everything away, that is the central plot point of this beautifully bizarre film.  Her home life is far from rosy – with a flailing marriage (Ke Huy Quan stars as her fed-up husband, Waymond), a father (James Hong‘s Gong Gong) she doesn’t get along with, and a daughter (Stephanie Hsu) she’s at emotional odds with – and her business is failing, so it’s hardly the time to be dealing with the crisis that is a multiverse.  What sets this apart from the usual existence-travelling fare though is that Evelyn isn’t physically manifesting with other iterations of herself, more mentally connecting to them in their own existences, learning of their unique skills to benefit her current state of mind; for example, one reality where Evelyn is an actress famous for her kung-fu mastery means she can tap into those abilities and perform as such with all the precision of a professional.

As much detail as I’d love to uncover when talking about this truly unique, masterful film, so much of its joy comes from how genuinely unexpected it is; it’s also not the easiest film to unpack either, but I would never want to do The Daniels such a disservice by spoiling even a minute.  Whilst there’s such stand-out sequences regarding hot dog fingers, buttplug-assisted battles, and the emotional punch of two rocks communicating (trust me, it’ll make sense once you see it), it’s the spiritual and psychological connection it manages to impart on its audience through its narrative strands that truly earns the film its praise and lasting effect.

Yeoh is so incredibly game here – as is all the cast, really – and it’s in playing the Evelyn we follow as the worst embodiment of herself that further fuels the film’s emotional core.  We’ve all contemplated how our life could be better or different if we had chosen a different path, said yes instead of no, etc, and Everything… rides such a “what if?” concept to its most lived-in potential.  It’s finding the reality in such a fantastical concept that truly sets The Daniels apart from their contemporaries (if they have any?).  Their previous effort, the Daniel Radcliffe “farting corpse” movie Swiss Army Man, was truly a love or hate type of feature, another that was hard to entirely wrap one’s head around, but, just as with Everything… it struck an emotional chord with a darker, sorrowful core that was easily overlooked by the more exaggerated comedic (i.e. fart humour) set pieces.

Somehow, in a film as wild and as bold as this, The Daniels have managed to streamline their eccentricities into something that’s likely to earn serious mainstream appeal.  An easy film to collapse underneath itself, Everything… is, well, everything that makes cinema as magical as it truly is.  The sheer fact this isn’t going to a streaming service is another miracle in of itself, furthering the film’s emotional hold on an audience who appreciate all facets of the medium that is genuine, passionate filmmaking.  As strange a film it may be, I dare anyone to call Everything Everywhere All At Once a boring experience.  You may not get it, but, my word, you’ll remember it; and not just because of everything Jamie Lee Curtis does on screen here as an IRS inspector whose own multiversal iterations challenge Yeoh’s for interdimensional MVP.

Everything Everywhere All At Once is screening in Australian theatres from April 14th, 2022.