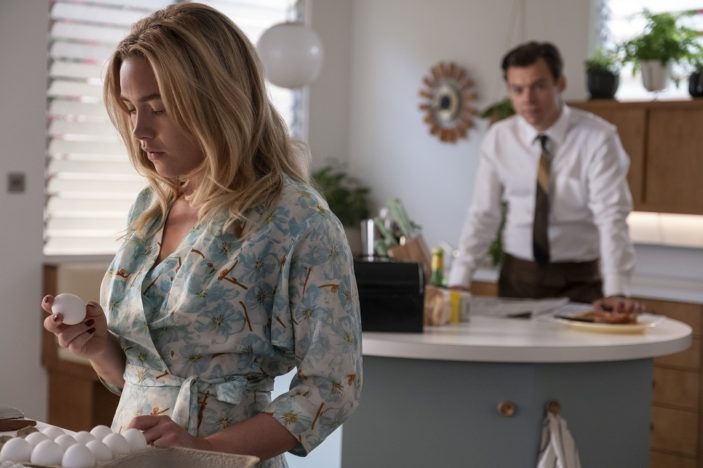 You’d be forgiven for knowing more about Don’t Worry Darling‘s on-set drama and supposed promotional tension than the film itself at this point.  It feels redundant to mention the specifics of such because, ultimately, it has very little bearing on the film’s quality itself; though there is a certain irony in director Olivia Wilde having to contend with misogynistic comments in a manner that parallels the patriarchal tropes of her narrative.

But what of the film, I hear you say.

Set in the 1950’s, with a candy-coloured aesthetic that speaks to Wilde’s lush eye as a visually-intuitive director, Don’t Worry Darling places itself in the cul-de-sac cosiness of Victory, a community of sorts that has a very Stepford-way of living.  The men, in seeming unison, drive off in their vintage vehicles to work on the mysterious Victory Project (they’re “Changing the world”, as it’s so ominously described) every morning, whilst their wives tend to the household chores in between various social occasions that usually involve a martini or two.

On the surface it appears picture-perfect, but it doesn’t take long for the bubbling undercurrent to shine through; and, depending how clued in you are, its ultimate reveal may or may not be clearly televised from the opening few minutes.  That undercurrent is what unnerves Alice (Florence Pugh, an absolute force who continually lifts the material whenever it narratively derails) who starts to question Victory’s purpose, her husband’s involvement, and what the Project’s leader, Frank (an enigmatic Chris Pine), is really developing; Harry Styles as Alice’s husband, Jack, weaves in and out of suitability as a leading presence.

The volatile energy of Frank – less of a boss and more of a cult leader in his delivery – is mirrored in his wife, Shelley (a dignified, yet stoic Gemma Chan), who oversees many of the activities the wives partake in and sprouts such beautifully sinister notes as “There is beauty in control.  There is grace in symmetry.”  And we’re being told not to worry, darling?

To uphold the perfection and symmetry of Victory, the wives – who also include Wilde’s alcohol-enthused Bunny (the director oft giving herself the funniest retorts) – are told not to venture out into the deserted planes that surround their community; Alice’s neighbour, Margaret (KiKi Layne, effective but underused), unfortunately showcasing the side effects of such a trek, displaying erratic behaviour that leads to a psychotic breakdown, one that Alice witnesses first-hand but is gaslit into believing a softer alternative.

As the film starts to unravel at the same rate as Alice, cracks begin to show from within.  Pugh, continually grounding the film’s stylised look with an honest, emotional resonance, makes us always care for Alice’s plight, and Pine’s unsettling nature speaks to the obvious potential that Don’t Worry Darling homes, but Katie Silberman‘s script, from a story originally penned by Carey and Shayne Van Dyke (grandsons of Dick Van Dyke, for those playing at home), feels as if it’s smarter and more commentative than it actually is.  There’s a bold ambitiousness here that, whilst commendable, doesn’t add up on a logistical or conceptual level, and the film asks more questions than it has the ability to answer; additionally, its ultimate comment on the societal positions of men and women isn’t exactly expressed in a subtle manner, especially in conjunction with the film’s initial focus on female pleasure.

I can’t deny Don’t Worry Darling hones a certain spectacular nature though, and Wilde is more than proving herself a competent director (though Booksmart was an infinitely much smarter effort, this is still good enough to showcase her evident directorial talent), but in its ambition comes its own undoing.  There’s more here that needed to be developed, but there’s a certain momentum present that manages to keep Wilde’s splashy dish from being entirely undercooked.