The Wonder is a restrained, elegant film boasting another committed turn from Florence Pugh: TIFF 2022 Review 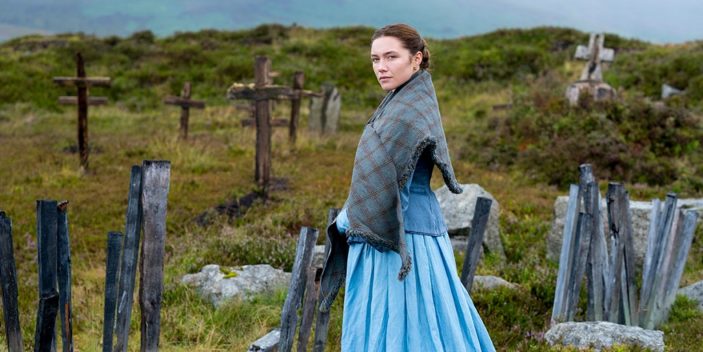 When The Wonder first begins there’s a rather pretentious and, ultimately, unrewarding additive that runs the risk of undoing all that will follow.  Niamh Algar‘s soothing vocal tone greets us as our eyes glaze over a constructed film set.  Algar informs us that we are indeed watching a film, but the players involve believe in their characters’ reality.

It feels like the gimmick of an untested filmmaker.  Someone who doesn’t have faith in their own material.  The irony then that director Sebastián Lelio, who has more than proven his worth as a storyteller with such efforts as A Fantastic Woman and Disobedience, doesn’t need such trickery to tell his story – an adaptation of Emma Donaghue‘s 2016 novel – an alluring tale that’s rich in atmosphere and hooks near-immediately with its central premise.

It also helps that carrying the weight of the film is an actor of Florence Pugh‘s strength.  She’s never less than utterly convincing as Lib, an English nurse called upon in 1860’s Ireland to assist in the strange case of a young girl, Anna (Kila Lord Cassidy, astonishing), who hasn’t eaten for four months, yet remains alarmingly healthy.  There’s belief that something unexplainably miraculous is occurring, so Lib and a local nun are asked to take shifts in overseeing Anna’s actions throughout the day.

Essentially boiling down to fact vs. faith, The Wonder takes a slow burn approach to uncovering its story, set at a time when the latter option seemed to be more of the dominant subject of conversation.  Lib has sense however, firmly believing in the former and that it’s impossible for someone to stay alive without any sustenance – especially someone of Anna’s age and stature.  Pugh, currently embroiled in the tabloid nonsense that’s overshadowing her other 2022 offering (if you haven’t heard, there’s actually plenty to worry about Olivia Wilde’s Don’t Worry Darling), is truly one of the best talents we have working in the industry right now, and the fact that we aren’t talking about this movie more – or at least this performance – is a massive disappointment.

Not to say The Wonder is a flawless film – the bookends of the film do it no favours – but it’s an intriguing, inviting film that deserves more than the rather muted reaction that has so far befallen it.  Its commentary on religious extremism is also handled in a respectful manner too, as it’s not boasting proudly that it’s against such, but it notes people’s priorities regarding their beliefs and how dangerous that can be.

A relatively restrained film (again, apart from the breaking-of-the-fourth-wall mentality that begins and ends the story), The Wonder displays an elegance that manages to keep audience investment alive, even when Lelio and Alice Birch‘s script doesn’t always practice refinement.  Similar to how the characters contained within are tested as believers, Lelio and Pugh’s utter commitment converts us as disciples of their work throughout.

The Wonder screened as part of this year’s Toronto Film Festival, which ran physically between September 8th and 18th, 2022, and digitally (select titles) from September 13th.  It is scheduled for a release on Netflix from November 16th, 2022.