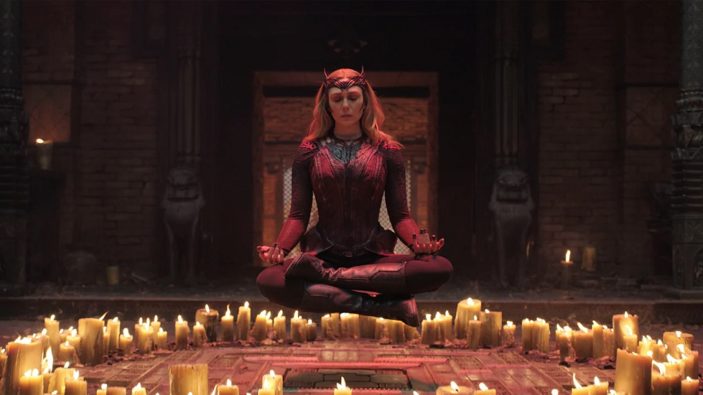 Given how crucial Benedict Cumberbatch‘s Doctor Strange was to the events of both Avengers: Infinity War and last year’s Spider-Man: No Way Home, it’s easy to forget that he hasn’t had all that much time dedicated to solely earning his own spotlight.  And whilst he earns titular rights in Sam Raimi‘s bonkers sequel – Doctor Strange in the Multiverse of Madness – he isn’t entirely this film’s main draw; though it’s not for a lack of trying.

Having faced his share of intended Earth-destroying villains, present day (and regular universe) Stephen Strange shouldn’t really be all too phased by the strange, horrific nightmares he’s currently awaking in a sweat from.  We, as devoted audience members, know better though, and once an oversized creature arrives to wreak havoc – interrupting the nuptials of Strange’s ex, Christine (Rachel McAdams, managing to be utilised more than what many will be expecting), in the process – Raimi’s wild narrative, penned by Loki scribe Michael Waldron, starts to take shape as Strange’s supposed nightmare prove more visionary than imaginary.

The arrival of America Chavez (Xochitl Gomez), a young girl with powers she’s unable to control (of course) who can dimension-hop through each multiverse, truly kickstarts proceedings, with her relationship – or, technically, relationships – with each Doctor Strange always resulting in him seemingly betraying her and opting to harness her power for his own benefit.  We suspect there’s a reason for such an act – our Doctor Strange is inherently good, right? – and, as it were, the re-emergence of Scarlet Witch (Elizabeth Olsen, truly the film’s MVP), Wanda Maximoff’s more chaotic, demonic embodiment, brings forth said reasoning.

Whilst it’s never been a secret that watching the WandaVision series was known as a must in order to understand Wanda’s emotional dynamic in this film, Multiverse of Madness doesn’t even bother to offer any type of exposition-laced catch up, cementing this very much as a continuation for the fans who took note; to anyone who didn’t watch the show, I can’t stress how lost you may feel in witnessing certain aspects of Wanda’s life and psyche that weren’t even hinted at in the previous Avengers films she featured in.

Much like the first Doctor Strange film – similarly overseen by a horror auteur in Sinister director Scott Derrickson (here remaining on board as a producer) – the cerebral freedom and visual inventiveness afforded to such a story is again embraced, this time to a far greater degree though.  Much has been said of the fact that Raimi is on hand as director, and whilst he has comic-book film experience in the original Spider-Man trilogy, his horror inclinations are what he expresses foremost.  This is a Sam Raimi horror film first and an MCU effort second, with his wild visual flourishes and penchant for shocking violence serving this sequel in a manner many will be unprepared for; this is, undoubtedly, Marvel’s most violent film to date and, quite possibly, the first that some adults may have second thoughts about in taking their youngest children to.

After Spider-Man: No Way Home embraced the fun, popcorn aspect of both the multiversal possibilities and the fan-pleasing cameos, many audience members are rightfully to be under the same expectation here, and, yes, there are a slew of cameo appearances here that are pleasing and shocking in equal measure, but at “only” 126 minutes, it ironically doesn’t feel long enough to truly unpack so much of what we are handed.

Though I suspect this will be one of Marvel’s more divisive titles – perhaps not Eternals-level discourse, but more than what people may be expecting – Doctor Strange in the Multiverse of Madness absolutely deserves credit for embracing a wilder personality than what these films tend to adopt; and, if nothing else, it cements Olsen as one of the brand’s strongest, richest performers, elevating her character with an emotional depth that not all comic book iterations are always afforded.

Doctor Strange in the Multiverse of Madness is screening in Australian theatres from May 5th, 2022.