Film Review: Disenchanted sadly lacks the magic of its predecessor 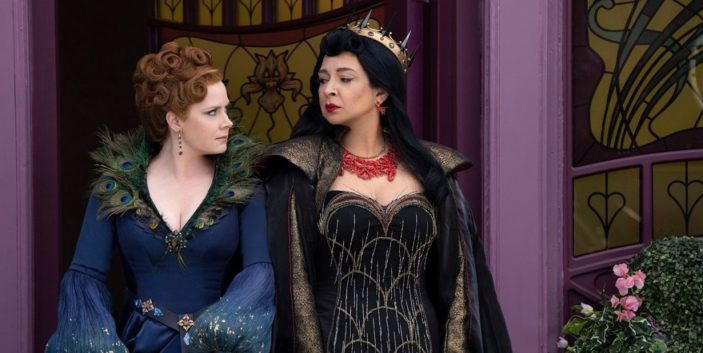 With Hocus Pocus 2 proving a sizeable success, The Princess Diaries 3 now officially in the works, and both Jamie Lee Curtis and Lindsay Lohan discussing their interest in a Freaky Friday sequel, the House of Mouse is more than proving itself in the business of revisiting original titles for the sake of nostalgia, fan demand, monetary possibilities, or a combination of all of the above.

15 years on from Kevin Lima’s expectation-exceeding musical comedy – the very one that arguably catapulted Amy Adams to global stardom – Disenchanted comes along to dispel the fairy-tale cliché of “Happy ever after”, and present its forever-optimistic princess Giselle (Adams, effortlessly slipping back into the character) in a life removed from the magic of both her homeland and her newfound oasis; respectively, the animated land of Andalasia and the concrete jungle of New York City.

Whilst much of the appeal of Enchanted was that Giselle, the perfect encapsulation of a goodie-two-shoes princess, was a fish-out-of-water in a big city, it makes sense that screenwriter Brigitte Hales (TV’s Once Upon a Time) would explore the narrative of what comes after happy ever after?  The reality isn’t nearly as appealing for a Disney audience though (or Disney+ in this case), so Giselle, silver fox beau Robert (Patrick Dempsey, not looking entirely engaged throughout), their young baby daughter, and Robert’s now-teenaged daughter Morgan (Gabriella Baldacchino, replacing Rachel Covey from the original) uproot their Manhattan digs for a fresh start in Monroeville, a fictional town that appeals to Giselle’s eye due to its seeming fairy-tale aesthetic.

Moving into an expanded house that’s in need of a good fix-up – nothing a little song-and-dance won’t fix – and immediately starting on the backfoot when it comes to Monroeville’s queen bee Malvina (Maya Rudolph, relishing her scenery chewing), Giselle is worried that her hopeful new fairy-tale life is more a nightmare.  Isn’t it just the luck then that Giselle’s former prince charming, now king, Edward (James Marsden) and his bride, Nancy (Idina Menzel, thankfully given the chance to belt out a tune this time), come for a visit and bring a magical wishing wand as a gift.  How much you want to bet that wishing wand comes seriously into play?

Wanting a magical existence akin to Andalasia means Giselle’s wish transforms Monroeville into a fairy-tale land, turning Malvina into a traditional wicked queen of the Maleficent variety, and Giselle into the wicked stepmother she’s always made sure never to be.  This decision to pit two villainesses against each other is one full of potential, and Adams is having an awful lot of fun when she leans into the more wicked side of Giselle – her movements and vocal pattern change instantly – but this premise only ever feels half-conjured, with Disenchanted seemingly too focused on its musical temperament.

Whereas the first film only lightly peppered musical numbers to enhance its magical elements, Disenchanted is practically a full-blown musical of sorts, churning out nearly a dozen songs over the course of its 118 minutes; none of which prove remotely memorable.  Longing for the absolute joy that was such a number as the first film’s Central Park ditty :That’s How You Know”, the closest Disenchanted comes to any type of magic is in the campy battle of who’s more evil of Giselle and Malvina when they duet on “Badder”, a midway set-piece that truly livens up a sequel that’s arrived a few years too late.

Whilst there’s a certain joy to be held when watching Disenchanted due to how precious Adams is in her role, and films such as this that exist to purely entertain on the safest level are always welcome fodder for parents wondering what to let their children watch, it’s that Adam Shankman‘s film fails to leave an impression that truly deems it a disappointment.  The magic in happy ever after is nowhere to be found here.  How disenchanting indeed.

Disenchanted is now available to stream on Disney+