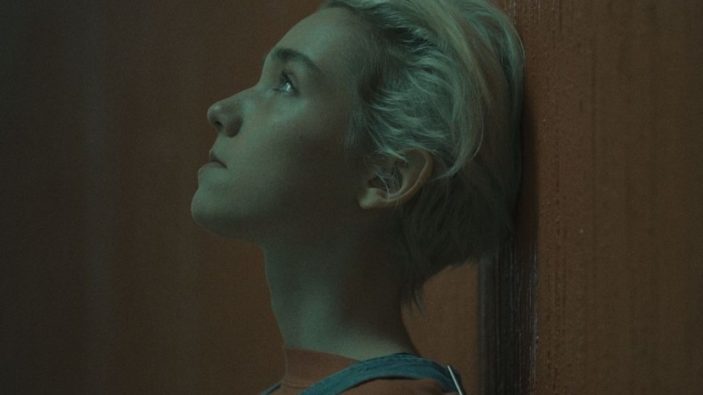 The type of indie horror flick that has a lot of promising-enough elements for it to earn audience investment, Come True may ultimately culminate in disappointment – in fact, it’s downright frustrating – but an atmospheric dread and hauntingly effective score keep Anthony Scott Burns‘s intense feature on a more upward trajectory overall.

At the centre of the film’s surreal tone is Sarah (Julia Sarah Stone), a teenage girl dealing with unexplained drama that essentially has forced her hand to avoid her home-life at all costs.  If that’s not enough she’s experiencing recurring nightmares, conjuring terrifying imagery of humanoid creatures that are resulting in her passing out at school and subjecting her to drinking six cups of coffee a day, an additive that isn’t helping her in the slightest.

Clearly desperate for a solution, Sarah hopes she finds her solace in a proposed sleep experiment run by a team of university students.  It’s not the most comforting feeling when she’s hooked up to a monitor every night, decked out in sci-fi-approved gear for good measure too, and her fellow volunteers all mysteriously disappear, but when the nightmares end and Sarah finally starts to feel well-rested, it’s evident it was worth the initial concern.

Come True being a horror movie though means it doesn’t take long for Sarah’s nightmares to reappear, this time far more aggressively, leading the investigative team to only strengthen their silence in what it is exactly they are hoping to uncover.  Unable to trust herself when she falls asleep, nor those around her when she’s awake, Sarah soon starts to exist in a permanent state of unrest, with the film gradually adopting the temperament that it too is rooted deeper in a subconscious state; aided further by its distinct colour pallet and synth-inspired soundtrack.

Whilst the film leans into the slow-burn mentality that so many horror films tends to as of late, it does so with a style and an atmosphere that makes it difficult to dismiss.  It isn’t until the climax builds and reveals itself that we feel alarmingly cheated, a closing shot that undoes much of what came before and only poses more questions than it answers.  Come True seems to thrive on ambiguity, so Burns’s decision to shift narrative gears in the way he does feels completely unearned, setting up a whole other film that we feel cheated out of.

Disappointing ending aside, this is a stylishly ambitious film that indulges in its own aesthetics and tones, gifting us the unique Julia Sarah Stone in the process.  A merging of horror and science fiction, Come True isn’t for the attention span-less generation who need gory visuals and overt exposition to get by.  This is menacing, discordant material that delights in its lucidity – it’s just a shame it ventures too far out of left field to be completely stick its landing.

Come True will be released on digital March 17th, 2021 in Australia and New Zealand by Lightbulb Film Distribution. Available on iTunes, Google Play and Sony Playstation.