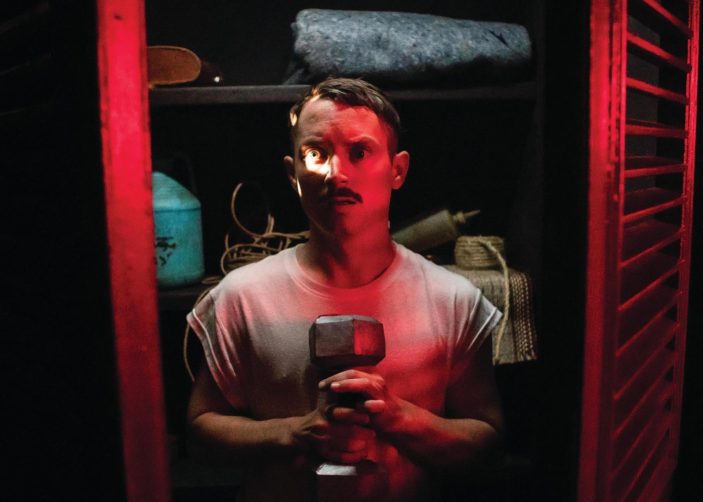 If we have learnt anything throughout cinema’s depictions of estranged families, it’s that the more alienated you are from one another, the more unpredictable your journey will be. This proves especially true in Come To Daddy, a pitch black comedic thriller that director Ant Timpson bathes in gory oddity.

There’s an unease immediately present from the moment Norval (Elijah Wood), a privileged Beverly Hiller musician, arrives at the Oregon lakeside cabin he’s been called to by his long-disaffected father, Gordon (Stephen McHattie). Daddy-not-so-dearest initially appears as if he wants to make overdue amends, but a seething tension billows over the course of the evening – a discussion revolving around each of them allegedly knowing Elton John proving the catalyst – and it soon becomes evident that the psychotic tendencies Gordon displays may not have necessarily skipped a generation when Norval, who seems placid, is pushed to his own limits.

Just where Come To Daddy opts to travel is best left unsaid though, as the turns screenwriter Toby Harvard (The Greasy Strangler) infuses into the narrative lead the film on a path that most will be unprepared for; though it is best to note that anyone with an aversion to bloody bodily harm should proceed with caution. And at an incredibly neat 93 minutes, the film covers more ground than expected, detailing Norval and his father’s unique past – both collectively and individually – with the latter revealing a lifetime of experiences that understandably leaves Norval questioning his nature.

On the flip-side of that though, Come To Daddy‘s brisk running time means that, as much story as it does cover, the ultimate plot reveals feel that much more surprising because we as an audience haven’t been afforded an abundance of context. The film would arguably not feel as exhilarating, so depending on the individual viewer’s preference to exposition or not, this admittedly fun, bloody romp may indulge and irk in equal measure.

Whatever the reaction to the film’s narrative choices however, Wood’s performance is undeniably uniform its its execution. The evolution we witness over such a short period of time is a reminder of just how talented a performer he is, with his wide-eyed look – that caters to both the frightening and free from blame temperament he hones – encapsulating the kind-cum-killer-instinct Norval unwillingly possesses.

Come To Daddy will be available on Demand through Umbrella Entertainment’s website and all other major platforms (Google Play, iTunes, Telstra, Fetch) from April 1st 2020, followed by Foxtel On Demand from April 15th 2020. A DVD/Blu-Ray home release is planned for June 2020.