Film Review: All The Old Knives is a conversational thriller intelligently carried by Chris Pine and Thandiwe Newton 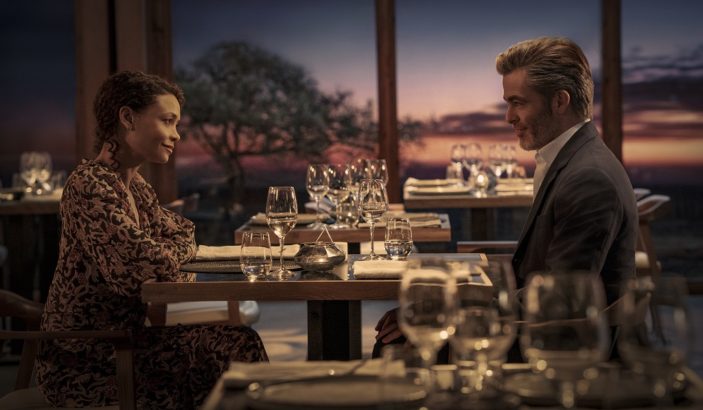 Despite both Chris Pine and Thandiwe Newton proving their worth as action figures within the spy genre previously – Pine in Jack Ryan: Shadow Recruit and Newton in Mission: Impossible II – All The Old Knives steps away from the action-driven physicality of the genre and opts for proceedings more in tune with a John le Carré novel, meaning that conversational deception is favoured over 007-inspired hijinks.

Adapted by writer Olen Steinhauer off his own novel, All The Old Knives begins on an unnervingly thrilling note, focusing on a grounded plane overtaken by terrorists who ultimately killed everyone on board.  It’s a wound re-opened for American operative Henry Pelham (Pine), who has been assigned the task of uncovering information of this years-old case by his boss (Laurence Fishburne), learning that there was a mole at one of their outposts that fed information to the terrorists.

Tracking down former colleagues and having to decipher their own ambiguities regarding the event, Pelham’s main focus boils down to Bill Compton (Jonathan Pryce) and Celia Harrison (Newton), a former lover.  Bill, retired, has a suspicious phone call to Iran on the log of the time of the incident.  Celia, out of the spy game and happily married, drew attention to herself when she left the embassy in the midst of a crisis meeting to speak to a contact.  Both Bill and Celia flit between earning our trust as viewers and rousing conjecture as Pelham’s conversations gradually reveal their own dark secrets.

Though the film opens with the terrorist sequence and revisits such throughout via flashbacks, All The Old Knives is a particularly quiet film, mainly dividing its time between Pelham and Celia dining at a lush California wine bar as he indistinctly interrogates her and their romantic history during their time at a Vienna-set outpost; the sun setting on their meal clearly serving as a subtle metaphor as the conversation grows darker, throwing us into a mix of caution and uncertainty as Steinhauer’s script proves our trust in any character isn’t guaranteed.

A welcome reprieve from the spectacle the genre so often indulges in, All The Old Knives, carried so intelligently by both Pine and Newton, is a mature-aimed thriller that doesn’t need to sell its espionage on the promise of distracting set-pieces.  As Pelham investigates and uncovers that this story is not a simplistic black and white affair, so too is this film’s narrative mentality, indulging in the many shades of grey that come with misdirection.

All The Old Knives will be available to stream on Amazon Prime Video from April 8th, 2022.