Rooms Hotel Kazbegi Review: An oversized cabin with dream-like views in the Republic of Georgia 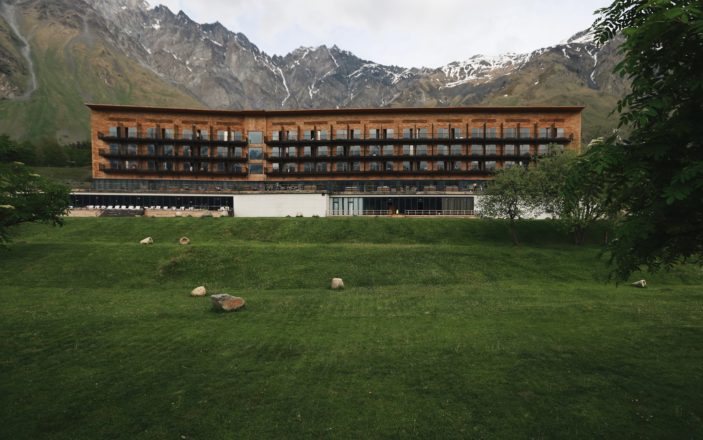 Nestled within the Caucasian mountains is a little Georgian town called Stepantsminda, or more commonly known as Kazbegi—for the name of the mountain range it is housed in. Rooms Hotel is a rather popular boutique hotel brand in the Republic of Georgia, with branches in Tbilisi, Bakuriani, and Kazbegi.

You would be forgiven to believe that you’ve somehow stepped into another world once you arrive in this tiny little town, and Rooms Kazbegi accentuates that feeling even further. Stepping into the hotel feels like you’ve entered a cabin somewhere in the Alps. The hotel restaurant, bar, and café take up most of the hotel’s main space, which features floor to ceiling windows with a magnificent view of Mount Kazbegi. 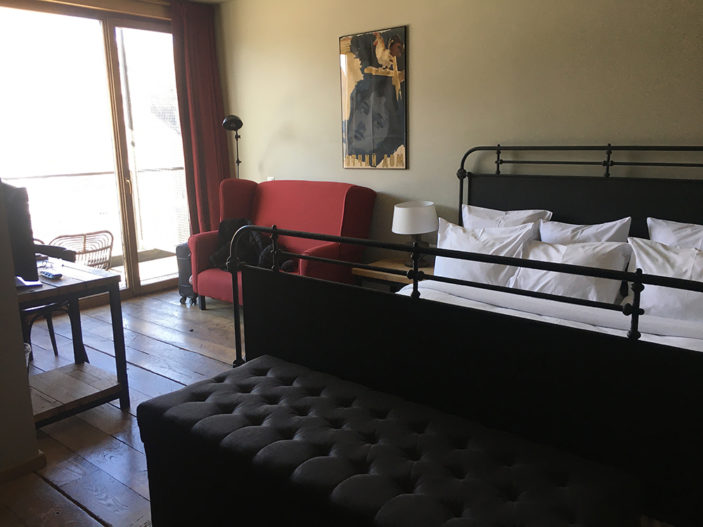 I booked Rooms Kazbegi’s Signature Room, the largest and most expensive room that the hotel offers. The hotel is nothing short of comfortable, and their rooms are no exception—from the chairs in the lounge to the beds in the rooms. I begrudgingly pulled myself out of each thing that I sat or laid in, despite knowing that I’ll only be moving myself to the next comfy seat. Signature Rooms come with a sitting chair as well as a sofa fit for two.

But despite this, booking this room gives you basically the same benefits as booking their Standard Room. Every room comes fitted with a desk, a minibar, the same 32-inch TV and balconies of the same size with two deck chairs. However, you do get a slightly larger room placed on the corners of each floor. Sadly, Rooms Kazbegi lost the opportunity to make these rooms amazing because the rooms are surrounded by concrete walls throughout rather than put their location to good use. Namely, a semi-panoramic view of the hotel’s surroundings would have been great to have, as I’ve seen some city-based hotels do. There is a lot of wasted space in the room, and due to the lack of windows, half the room gets dark really quickly.

As to be expected with Georgia, there is no separate room-section for non-smokers, although smokers are only allowed to smoke on their balconies. If you’re unlucky enough to get a smoking neighbour, however, be prepared to smell the smoke inside your room—even if you shut your balcony door tight. Another thing to note is that the walls are, unfortunately, quite thin. I could hear my hotel neighbours talking outside, and during my final night, I could very clearly hear my next-door neighbour snoring his night away. Thus, expect terrible soundproofing during your stay. 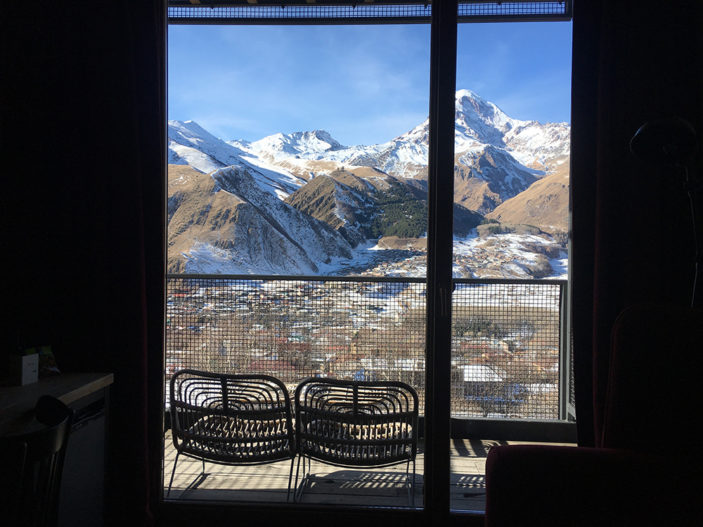 With that said, the view from my hotel room almost made up for the negatives. I highly recommend getting a room with a mountain view if you can—you won’t regret it. Waking up to the fantastic view of Mount Kazbegi for the entirety of my stay was an experience, for sure. Just keep in mind that you probably should have a good pair of earplugs with you if you decide to stay here.

The rest of the hotel, if I’m honest, is actually pretty great. You can tell that cosiness is at the forefront of this hotel, and not only do you see it, but you’ll feel it as well. Wood plays a forefront in the design of Rooms Kazbegi, making it feel like you’ve stepped into an oversized mountain cabin. It even comes complete with a massive fireplace in the bar area! The lounge-slash-restaurant area is a good spot to get some work done if needed or just to catch up with some reading—again, all while enjoying an amazing view. 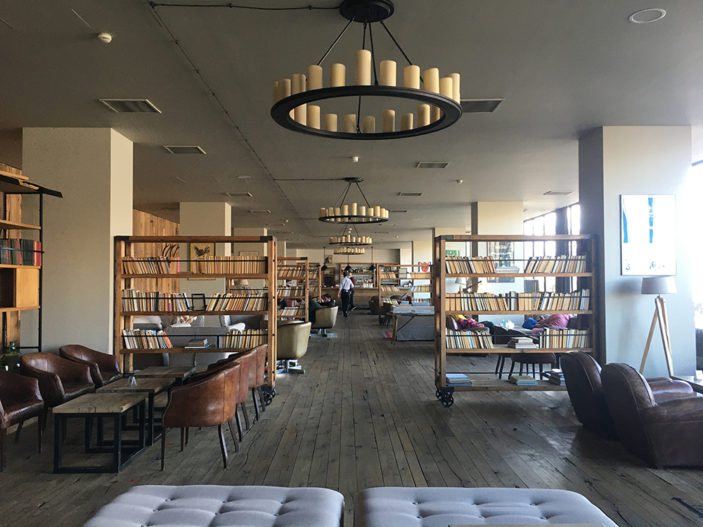 Rooms Kazbegi’s breakfast buffet is as you’d expect—continental breakfast with the addition of local Georgian fare. Since my stay was during pandemic times, all foods were placed behind plexiglass and were only accessible via the help of staff—just point, and you shall receive. That was a curious experience, but probably a more welcome one, as it definitely helped reduce the amount of food I had on my plate. If you wanted anything cooked, be it waffles or eggs, you would order that via the QR code available at your table—pretty straightforward process, and it doesn’t take your order too long to arrive.

Since my stay at the hotel was during the second lockdown period in Georgia, there wasn’t any exploring I could do regarding food as they weren’t allowed to be open, and delivery services are non-existent in the town (fair enough). The lockdown limited all my meals to the overpriced (but, thankfully, delicious) fare served at the hotel’s restaurant. 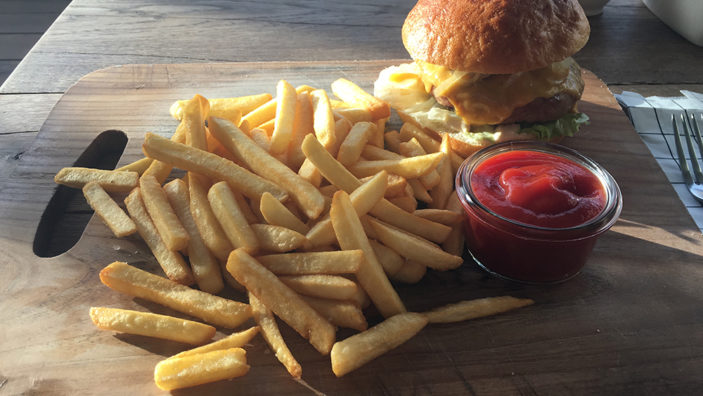 On my final day, I decided to add smoked salmon to my breakfast plate, and I’m sad to say that I suffered for it for about a week afterwards. Considering that Rooms is supposedly on the higher end of the hotel scale, it was surprising to have that happen. So, when here, consume at your own risk!

Rooms Kazbegi is the only hotel of the bunch that is fully equipped. Within the premises is a small indoor swimming pool, a decently equipped gym, a sauna, and writing, soon-to-be a casino. During the warmer months, you can sunbathe on the massive wooden deck right next to the pool. In Georgia, the sun would sometimes still shine pretty starkly, even during the winter months, so if you’re feeling like a bit of a daredevil, you could still sunbathe while it’s cold out.

There isn’t much to do within Stepantsminda itself—it’s ultimately a small town with a handful of stores and restaurants—but there is plenty to do in the surrounding areas. Stepantsminda is about an hour’s drive away from the ski-resort town of Gudauri, where you can enjoy winter sports or even just get a change of scenery during the rest of the year (if you really need it!).

The general area of Kazbegi is well known for the Gergeti Trinity Church (above)—something you’ll see in most, if not all, ads about Georgia. You can get up here with a car or by taking a moderate hike up there. We opted for the latter, and the view from the top just seemed that much more worthwhile afterwards. This 14th-century church is a little over a six-kilometre trek from the hotel and, depending on how decent you are at hiking, should take you about two hours to get up there. If you’re still feeling adventurous by the time you’re up at the church, the Gergeti Glacier is up a further 730 meters in elevation.

While we didn’t do this ourselves (not for lack of wanting), the Kazbegi National Park is about a 30-minute drive from the hotel and came highly recommended—both by the hotel staff and the internet. 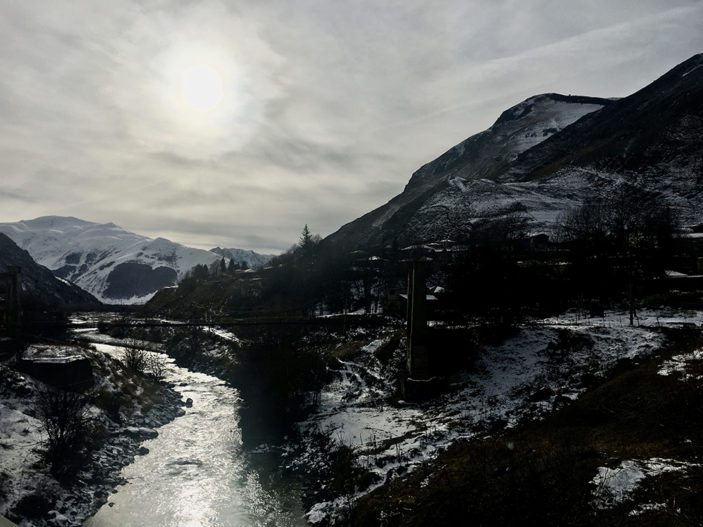 It is a massive shame that my stay at Rooms Kazbegi left me with mixed feelings. I really wanted to love it as everyone else does, but the fact of the matter is that the few problems I faced during my stay nearly wrecked my visit—albeit to (almost) no fault of the hotel itself.

That being said, I would still love to come back for another stay, if not just to enjoy those views again. Albeit probably much better prepared!

Rooms Hotel Kazbegi is located at 1 V. Gorgasali St, Stepantsminda, Republic of Georgia. Visit the hotel’s website for more information and to book a stay. Hot tip: Keep an eye on their Instagram page for great deals.

The writer stayed at the hotel for two nights at her own expense. All photos were taken by the author unless stated otherwise. Header image is taken from the Rooms Hotel website.

COVID-19 Notice: At the time of publishing, travel is not currently possible for Australian tourists based in Australia. This article has been published for our readers in other markets. No matter where you are travelling from or to, however, please refer to local and international travel advice as you look ahead to future travel.