What is Georgian Cuisine? 5 Mouth-Watering Dishes To Eat Before You Die (And How!)

The Republic of Georgia is a land nestled within the gorgeous Caucasian mountain range and is home to many things – friendly faces, rich history, beautiful scenery and, of course, food to die for.

If you’ve never tried Georgian cuisine, let me sum it up into two simple words: cheese and wine. Food plays an essential part in a typical Georgian’s life, such that much of their culture revolves around food. But the foods of this Caucasian country expands beyond that as well, and that’s what we’re exploring today.

Here are five Georgian dishes that you simply must put into your mouth: 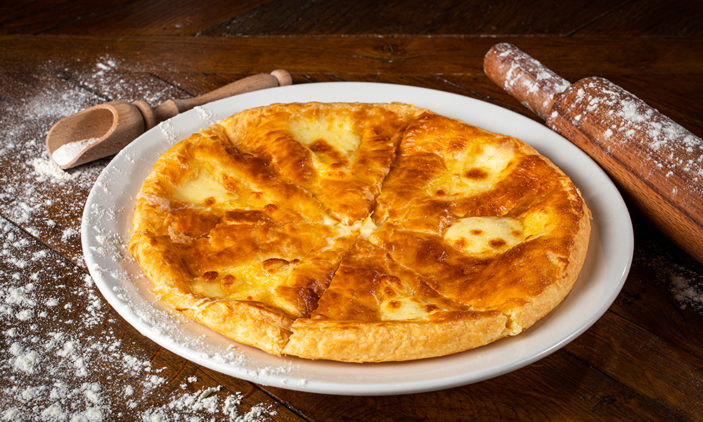 Roughly translated into “curdled cheese”, khachapuri is the one Georgian dish that is world-famous. In essence, a khachapuri is bread stuffed with curdled cheese, although, fun fact: almost every region has their unique way of making khachapuri. While most regions make a more pizza-shaped variety (pictured above) the Adjara region, in the west of Georgia, makes the kind that you may be familiar with: 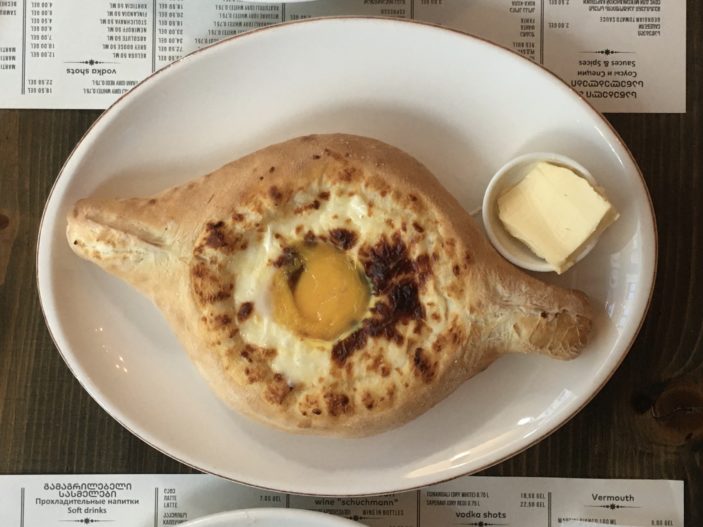 This boat-shaped wonder houses a little cheese crevice, some knobs of butter, and an egg on top. Other varieties tend to only be cheese-stuffed (not that that’s a bad thing, anyway!) 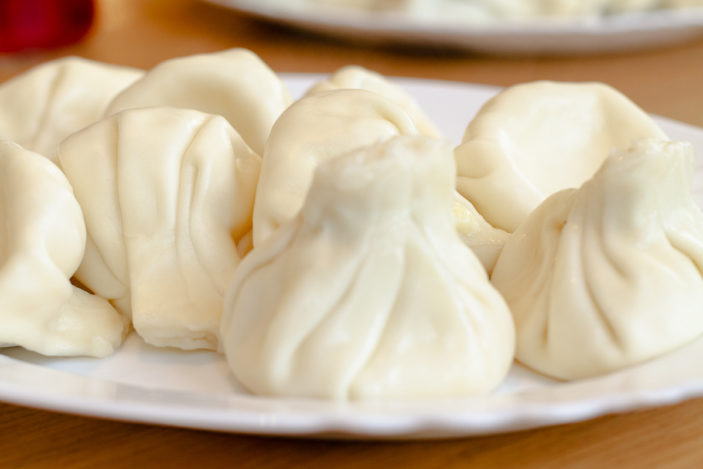 Khinkali are basically giant, fist-sized dumplings with a cute little knob on top. Typically, they’re served with a filling akin to xiao long bao – slightly soupy with a meat and herb filling. Although, herb-free and veggie-friendly fillings with cheese, potato or mushrooms are also available.

When you go to a local restaurant, you can order as many or as little as you like (although typically, there is a minimum order of five pieces). But, in basically any setting where one goes out with their friends, there will be a huge stack of khinkali on the table. The most I’ve seen is about two stacks of thirty khinkali at one go…shared between two guys! 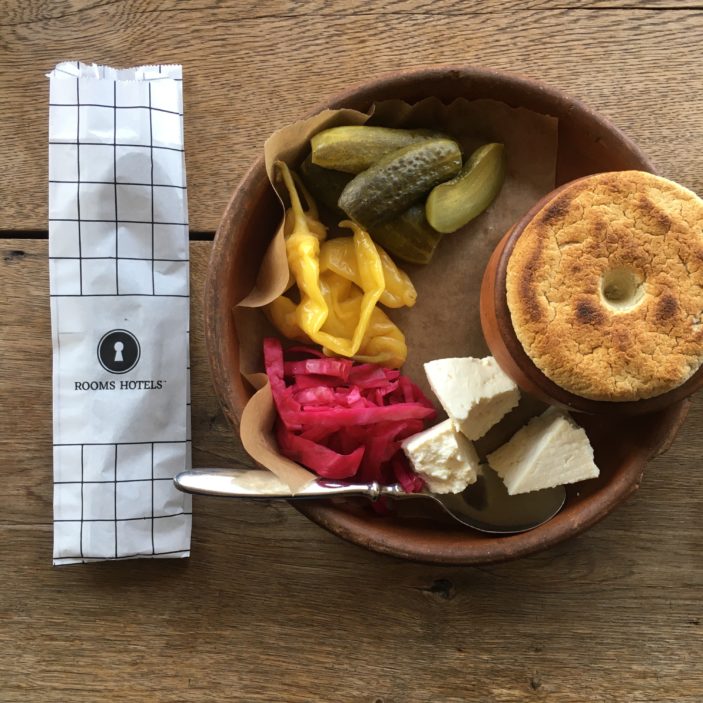 Lobio is a spiced kidney bean stew, traditionally served in a small clay pot with a piece of local cornbread (called mchadi). However, I would also suggest getting an order of local Georgian bread on the side.

Lobio is hands down the best winter-time food, in my opinion, though of course, you may enjoy it all year-round. When I spent a weekend at Stepantsminda in the winter of 2020, I ate this every night to stave off the cold. 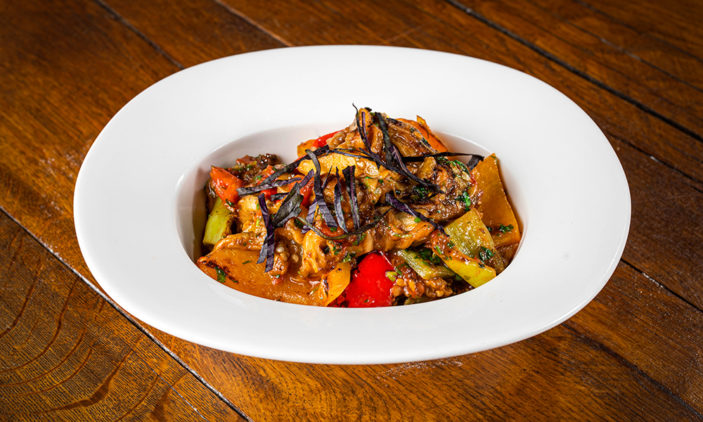 Sometimes described as “Georgian ratatouille”, ajapsandali is a side dish typically served cool rather than piping hot. Onions, eggplant, tomato and bell peppers and usually seasoned with garlic, basil, coriander, and the local Adjika pepper make up the typical ajapsandali.

Since ajapsandali is normally served cool, this Georgian dish is the perfect summer dish for your daily five. 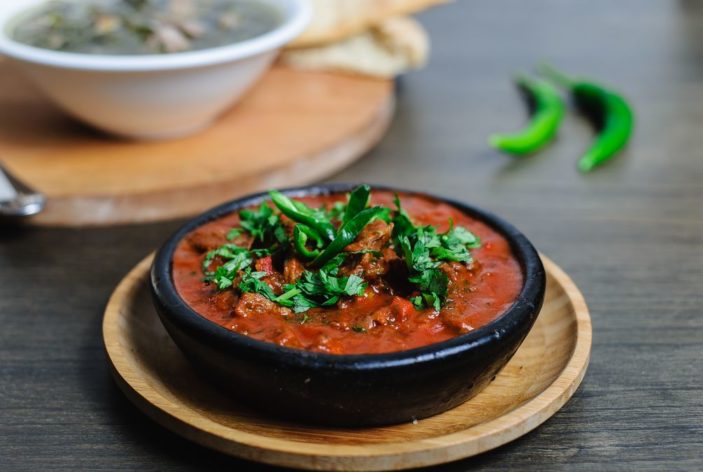 If you’re not feeling like having veggie-leaning stews (or just don’t feel like having a farty day), then ostri is the dish for you. Ostri is a spicy, beefy, tomato-based stew that’s a popular staple in Georgian homes and restaurants alike.

When done right, each bite of ostri will just melt in your mouth in an explosion of Georgian flavours.

If you’re in Sydney and got hit by the craving bug for Georgian food, check out “Khinkali Fabrika” by Ana. Ana is based in Hurstville and specialises in khinkali and Adjarian khachapuri, available for pick-up and delivery.

However, check out Umbrella Lounge Bar in Elsternwick for some freshly cooked Georgian fares if you call Melbourne your home.